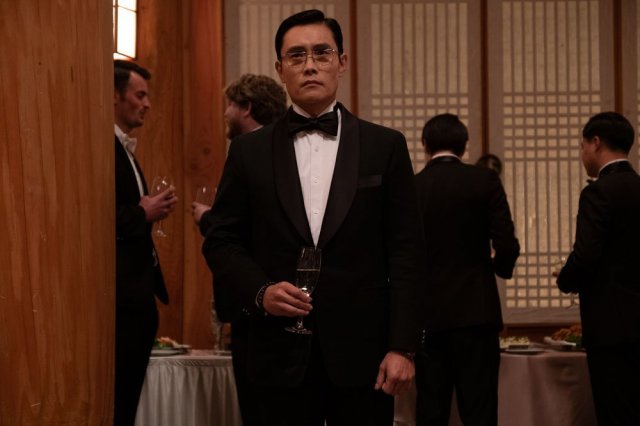 The days of the Third Republic and particularly Park Chung-hee's reign in the 70s, including the implementation of the Yushin Constitution and his assassination by his close friend and director of the Korean Central Intelligence Agency, Kim Jae-gyoo, is among the darkest in modern Korean history. Based on the homonymous novel by Kim Choong-sik that narrates the final days of both Park and Kim, Woo Min-ho directs a spy film that has already topped the box office since its release on January 22.

The story deals with the events that led to the assassination of President Park and Cha Ji-chul (Kwak Sang-cheon in the film), chief of the Presidential Security Servives, 40 days before the actual deed, focusing on Kim Jae-gyoo (Kim Kyoo-pyeong in the film). Being a friend of President Park and one of the key members of the coup that brought him into power, Kim is loyal and always willing to do his President's bid, even if his orders border on the illogical. However, after meeting the previous head of the KCIA, Park Yong-gak, in the US, where he has defected, Kim learns of the existence of another secret service, whose men report directly to President Park, even unbeknownst to him, and his mentality starts changing. At the same time, the constant antagonism between him and Kwak Sang-cheon, a war-thirsty simpleton with too much power on his hands, is putting even more strain on Kim, particularly because President Park seems to encourage this "competition" between the two men. As Kwak's's cries to declare martial law are getting louder and more appealing to Park as the Bu-Ma Democratic Protests were in full bloom, Kim finds himself alienated and in a very difficult position of choosing between the wellbeing of his country or his close friend and comrade.

As mentioned in the intro text of the film, Woo Min-ho took a number of creative liberties, which are justified, to a point at least, since Kim Jae-gyoo's reasons for the assassination were never fully revealed. Apart from the depiction of the real events, which seems to suffer a bit from the Hollywood, impression-focused tactics, the film as a cinematic work is exceptional. Woo creates a web of treacheries, lies, paranoia, and stupidity that seems to capture the general circumstances of the era quite intriguingly, and placing Kim in the middle, thus explaining his growing discomfort that eventually led to despair and the aforementioned deeds.

This aspect owes much to Lee Byung-hun's exceptional acting, whose struggle to retain both a composure of and his actual logic and dignity, and failing, are a treat to watch. Although in laconic fashion, this struggle is palpable, while the few scenes where he cannot keep his calm are excellently portrayed and well placed.

At the same time, and through the constant changes on the upper hand regarding the favor of President Park between Kim and Kwak, Woo Min-ho retains a psychological agony that matches the ones deriving from the actual events, thus overcoming the reef of the lack of mystery regarding who the traitor is. The fact that everyone's phones seem to be bugged, a tactic that allows the script to move on in a number of situations that would be difficult to portray otherwise, may seems excessive at times, but since the story takes place during the Cold War Period, could be the truth as well.

This constant and permeating atmosphere of agony benefits the most from the events that unfold in torrenting fashion, with the rather fast pace implemented by frequent cuts working quite well for the narrative. The cinematography again follows Hollywood "rules", being quite polished and stylistic, but once more, I felt that it suits the general "spy  game" aesthetics quite nicely.

Lee Sung-min as President Park is quite good in presenting his growing paranoia, while Lee Hee-joon highlights all the characteristics of Kwak Sang-cheon with gusto. Kwak Do-won is also good as Park Yong-gak, although his character suffers a bit from the lack of screen time.

"The Man Standing Next" is an exceptional mainstream film that uses the true-story setting to present a captivating spy thriller whose atmosphere, acting and direction will satisfy all viewers looking for entertainment along with elements of historical context.

"[Hancinema Film's Review] "The Man Standing Next""
by HanCinema is licensed under a Creative Commons Attribution-Share Alike 3.0 Unported License.