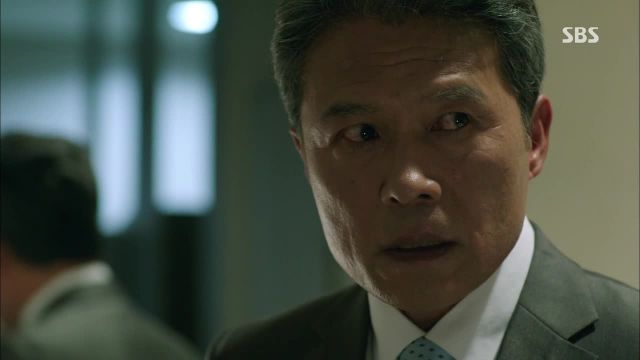 Chun Ho-jin is one of the most prolific actors in Korean film and drama. Last week Orion from 'Orion's Ramblings' reviewed his work in film, highlighting Cheon's versatility in role choice and in his acting. He's been working steadily in film since 1985 and in drama since 1988. This is a man whose talent is finessed by twenty-nine years of experience.

Unlike film roles, Korean drama roles usually have slimmer pickings for men of Cheon's age (53) . Oftentimes older actors, the "ahjeossi" actors, are hired to be fathers, uncles, or political leaders. In drama, Cheon has found himself in a similar position, but he still manages to pick the most interesting of roles on television. He is a chameleon who can blend into the background, or command the screen at will.

In the 2009 family drama, "Smile, Love", he plays Jung Kyung-ho's meek, goofy, endearing father, Kang Sang-hoon. As Kang, Cheon really had to let go in body, speech, and expression. Such characters are a dime a dozen, but it is here that Cheon's experience makes him stand out in such a large cast. Kang Sang-hoon fusses with his wife, but has very little power against his father. At those times, Cheon makes his characters fade into the background so that he's hardly memorable. But when Sang-hoon takes courage to defend his son, he is suddenly present. Although the role is nothing new, Cheon's acting makes it entertaining and effective.

In contrast, Cheon's character in 2012's "My Daughter Seo-yeong" is also a father, but instead of being weak, he is utterly pathetic. There is a constant nervousness that Cheon infuses into this character, Lee Sam-jae, who loses his daughter because of his terrible life decisions. It takes Sam-jae the entirety of the show to rebuild his self-esteem, courage, and way of functioning. It's a difficult role, and an exhausting one. Kang Sang-hoon was weak, but lacked the nerves that permeate nearly every scene that Lee Sam-jae is in. Even without speaking, Cheon had to draw attention with his character's insecurities, and he did. Very well.

These small, but very important differences, are what makes Cheon such a solid actor. He can take on a father role, but each father he plays is unique and often ensconced in interesting situations. Han Chi-gook, the nearly blind former gang boss in "Two Weeks", is an estranged father searching for redemption. It's a peculiar version of the father figure that Cheon normally plays as Chi-gook is a shifty, hermit of a man.

Besides fathers, Cheon often takes on politicians and men in power. "City Hunter" (2011) had Cheon taking on the role of father and president. His tempered portrayal of a floundering president with secrets that burdened him. In this he is simultaneously powerful as South Korea's president, but inwardly vulnerable. The moments when the president peels away his "leader mask" shows off Cheon's ability to make minute changes in expression and the "feel" of the moment. In the currently airing "Doctor Stranger", Cheon takes on an unsavory politician, one who is genuinely selfish and willing to use people for his personal gain. In this role, Cheon acts hardened, even when smiling. It's this ability to portray a dual nature, to belie the true emotion, where Cheon excels in the drama world that often relegates him to similar roles. He can make each role individual, different, and oftentimes, more than what the drama requires of him.

Chun Ho-jin can be silly, serious, evil, pathetic, goofy, misguided and anything else dramaland asks him to be. He does it and becomes the character with no traces of Chun Ho-jin the man. He is no character actor, but an actor who often plays similar roles in drama. But he is capable of more and consistently shows that in his work.