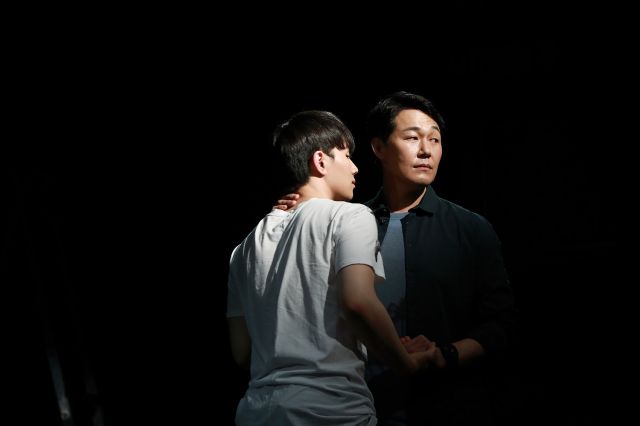 Pang Eun-jin's "Method" is an exploration of the investment of emotion and self into art and a potent one at that. Screened at the 22nd Busan International Film Festival from October 12th to the 21st, the eighty-two minute film just released in theaters November 2nd. The intense emotional journey of seasoned method actor Jae-ha (Park Sung-woong) and reluctant idol actor Young-woo (Oh Seung-hoon) is riveting and unhinged. Yoon Seung-ah's Hee-won is what tethers the characters and the story to reality - but only just barely.

Set mostly in the rehearsal room, the theater, and Jae-ha's home, with a special trip to the beach, "Method" is a three-legged journey that converge into an almost painful cathartic release. Jae-ha is an experienced actor who always transforms into his characters, both on stage and in his life. His roles consume him and that ability of his defines his stage success and also makes him impatient towards Young-woo's initially flippant attitude about their two-man stage play, "Unchain", the story of a dangerous homosexual love. Young-woo is a popular idol who has joined the play with zero enthusiasm. Until, that is, Jae-ha, consumed by his role, performs his lines so convincingly (and physically grabbing Young-woo) in an attempt to teach the idol, that Young-woo is frozen in place, captured by Jae-ha's raw emotions. It is in that moment that Young-woo starts to feel something other than apathy towards acting and wants to learn how to act for the stage. He also wants something a little more from Jae-ha. Hee-won, Jae-ha's long-term girlfriend, constant supporter, and an old hand when it comes to Jae-ha's dedication to his craft, is the last of the leading roles.

This story is less about the homosexual aspect of Young-woo and Jae-ha's relationship and more about how two people involved in art become wrapped up in each other. As a musician who has worked professionally in chamber music, I know on a personal level how emotionally invested a person can become, not only in the music (or in this case the play), but in the people with which you work. Even people I detested outside of music, I cared for deeply while on stage. I see the same sentiments in this stage actor and his young protégé. To create beautiful, true art, one must throw oneself into that art, which is what Jae-ha and Young-woo do for better, and for worse.

Part of what makes "Method" an effective film is the connection between Park Sung-woong and Oh Seung-hoon, the latter of which held his own in a difficult role and across from a powerful veteran actor. There is a lot of raw emotion to dig into that was beautifully portrayed and made the romance beautiful, whimsical, and utterly delightful despite all that surrounded it. Yoon Seung-ah slides into the film effortlessly, which a keen eye on the couple and a careful reaction to the situation that piques at a moment in the film that was well-timed by director Pang Eun-jin. Throw in in the background music, a mix of Romantic music such as Chopin and Debussy, and original compositions that mimic mid-20th century pit orchestras, and we have a well-translated stage to screen film.

My one major complaint about the film is the lack of buildup towards the immersion of both men into their roles. It felt rushed. Many films these days linger on the development in the first two-thirds of the movie, but "Method" avoided that. Some of the emotional reach into the hearts of the audience may be lost by that. Otherwise, I was quite impressed by the way the movie developed after the climax and during the denouement, a point in time when many films flag. 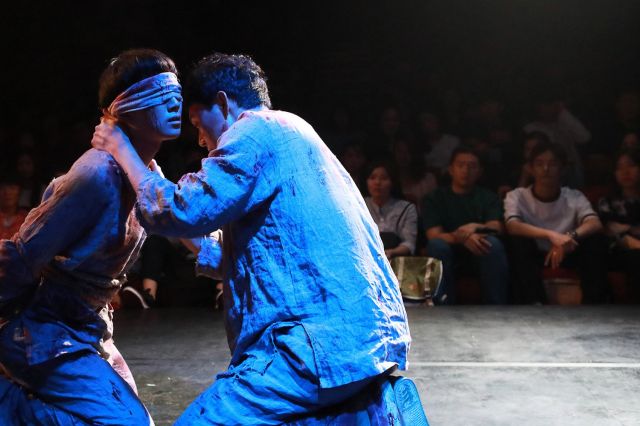 Hee-won's role is also an unusual one. Rather than feeling like a third wheel, she feels almost like like an omnipotent presence, albeit one who can be hurt. She is the one who causes the scandal to hit the media, but she is also the one who has a strong hand in how the film wraps up.

Pang Eun-jin's start filming style aided the portrayal of a theater stage, which is quite a different world from that of the silver screen. As a person of the theater, I really did feel connected to the stage of "Unchained" with her long shots of the full stage and the rehearsal room, her unflinching close ups on potent emotional moments, and her way of making the camera a character in and of itself. A peek down the street or down a hallway was never haphazardly thrown in, much like Jae-ha's meticulous eye for detail in his craft.

"Method" is definitely a worthwhile film, showing Jae-ha's journey that he takes with each of his works, watching Young-woo grow up in a very unusual way, and experiencing Hee-won's special, devoted love for Jae-ha. Now that it's out in theaters here, I will most definitely go see it again.