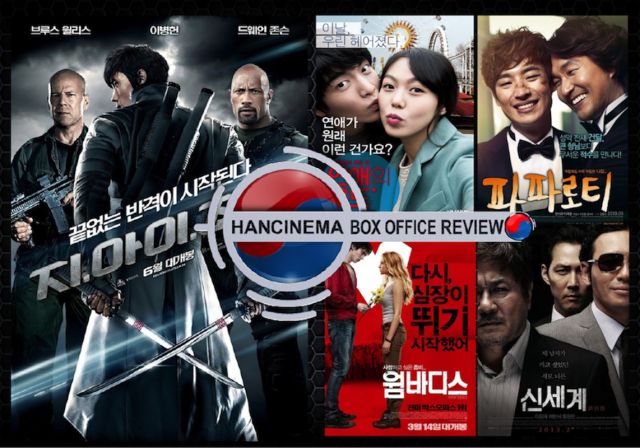 The second G.I. Joe film has hit the Korean peninsula and, with help of Lee Byung-hun as 'Storm Shadow' no doubt, has managed to secure first position. "G.I. Joe 2: Retaliation" snatched 708,267 admissions (43%) over 761 screens to make it only the second foreign film this year to make it to number one. The Korean actor Lee Byung-hun ("Masquerade" and "I Saw the Devil") shows that he still has quiet some pull with fans as the Korean public, after a relatively quiet March, have warmly welcomed his latest action efforts.

Moving on to some more regular fixtures now, the first of which is Park Hoon-jung's "The New World". This is the sixth week in the chart for Park's cops and gangster flick, it has spent three of those weeks as number one but finds itself this week at number five with 104,099 (6%). "The New World" remains as the third highest grossing Korean film of year, well behind "The Berlin File" (7,165,501) and even further behind this year's number one, and this weekend's sixth, "Miracle in Cell No.7" (12,736,005). "Miracle in Cell No. 7" seems to have become a regular in the top ten now, with the new month marking its tenth week in the top ten. Lee Hwan-hyeong's smash hit added 44,877 (2.3%) to its total winnings this past weekend. That was promptly followed by the character-driven "Django Unchained", proving that despite Tarantino's Oscar winning efforts the Korea public are perhaps less attracted to postmodern re-telling's of America's turbulent racial history. Still the film carted off 34,685 (1.98%), putting the film's total admission count in Korea at 228,612.

"The Man Who Laughs" is a film based off of Victor Hugo's novel of the same name. Films set in France seem to want to do well in Korea ("Les Miserables" is still currently the highest grossing foreign film of the year), but this adaptation by Jean-Pierre Améris only managed 29,853 (1.6%) in its first weekend out. It was followed by the Japanese animation "One Piece Film Z" following suit with 22,229 (1.1%) of its own. Lastly, O Muel's "Jiseul" climbs its way into the top ten with 13,907. This one is a Korean war drama set in 1948 on the popular Jeju island (of which O Muel is a native), and actually won the World Cinema Dramatic Grand Jury Prize at the 2013 Sundance Film Festival this year.