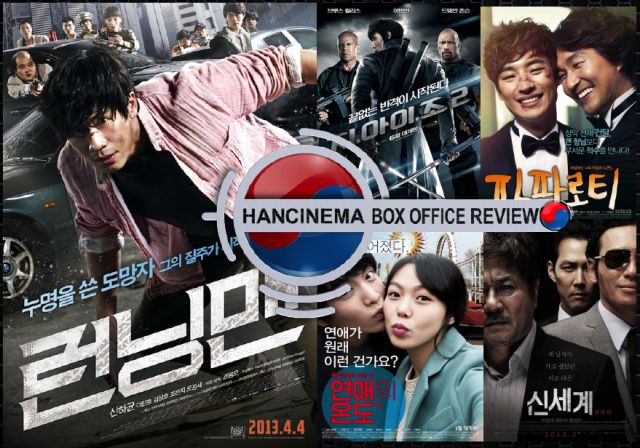 Jo Dong-oh's action thriller "Running Man" is off to a good start as it snatched the top spot in its first weekend out. The film claimed 501,908 (30.89%) admissions over 568 screens, only just pushing outs its closest rival "G.I. Joe 2" which came close itself with 464,619 (30.49%). "Running Man" stars Shin Ha-kyun as Cha Jong-woo, a young man who accidentally gets caught up in a murder case and soon finds himself on the run because of it. This week's chart saw a number of new entries both local and foreign, in addition to some regular faces that have made the top ten their own the last few months. But overall admissions were low, with only the top two films seeing much action in this quieter week at the movies.

Last week's number one "G.I. Joe 2: Retaliation" almost snatched a second week at the top, but its 464,617 (30.5%) just wasn't enough to keep Jo Dong-ho's "Running Man" out of the race. The film also had the most screenings around the country with 604. "G.I. Joe 2" stars the Korean actor Lee Byung-hun as 'Storm Shadow', a ninja bodyguard of the Cobra Command. "G.I. Joe 2" has amassed 1,570,044 admissions since its release last week, and perhaps was expected to retain that coveted top spot in the charts. At number three is Roh Deok's "Very Ordinary Couple" slipping just the one place with 206,164 (13.4%). This unique romantic comedy now moves on to 1,653,496 admissions in three weeks. Yoon Jong-chan's forth film "Paparoti" starring Han Suk-kyu and Lee Je-hoon came in at number four. "Paparoti" added just 146,450 (8.6%) over the course of the weekend.

Next was Park Hoon-jung's "The New World" as it enjoyed its seventh week in the top ten with 62,591 (4.1%). This conspiracy flick advanced to 4,630,101 total admissions and is the third highest grossing Korean film of year thus far. "Miracle in Cell No.7" has the honour of being the highest grossing Korean film of year with 12,782,920 admissions, 27,817 (1.6%) of which came from this past weekend. Lee Hwan-gyeong's prison drama has stayed in the top ten for eleven weeks now, a phenomenal achievement as fans continued to trickle in to one of 126 screenings around the country. The American sci-fi film "The Host" enters the chart with 25,629 (1.5%), a film adapted from Stephenie Meyer's novel of the same name.

Moving towards the lower end of the list now and at number eight we find another new U.S. release in the form of "Hope Springs". "Hope Springs" is a romantic comedy directed by David Frankel and stars Meryl Streep, Tommy Lee Jones and Steve Carell. The film claimed 24,616 (1.5%) over its 179 screens. The post-apocalyptic zombie comedy "Warm Bodies" took a serious tumble this past weekend, falling from forth all the way to ninth in its forth week out in Korea. The film added 22,270 admissions (1.4%) to its new total of 1,160,804. Lastly, rounding out the weekend's top ten was Min Gyoo-dong's drama "In My End is My Beginning". Min's last directorial effort was with last year's omnibus film "Horror Stories" and is also involved in the sequel which is set for release later this year. "In My End is My Beginning" earned 20,416 (1.3%) admissions to hold down tenth.