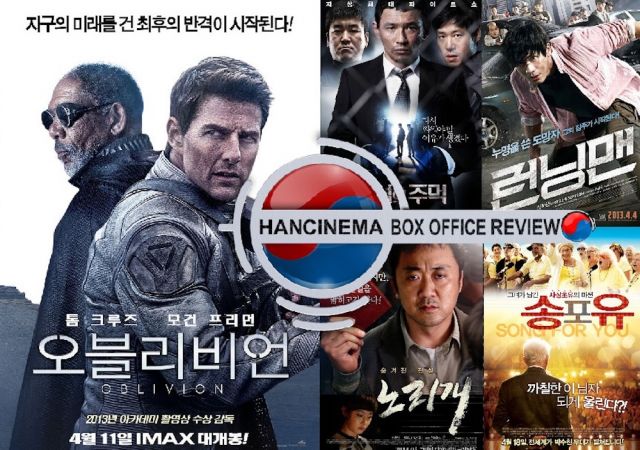 The science fiction action flick "Oblivion" managed to hold onto first place in what was one of the year's quietest weekends at the box office. Tom Cruise's latest held down first with only 367,022 (30%), the lowest admissions count for first this year. Tom Cruise is a popular figure in Korea and, despite some close competition from Kang Woo-seok's "Fist of Legend", his latest representation was able to cling onto gold. "Oblivion" had 563 screens around the country from which to pool admissions from, and this past weekend saw it advance its total tally to 1,204,448.

"Fist of Legend" maintained its high screening numbers, 638 in fact, but was still unable to advance past the Hollywood hit. Kang Woo-seok's film added 334,593 (31%) to its cause (down from last weekend's 478,856), moving this drama to 1,243,300 total admissions since its release on the 10th. At number three was the action thriller "Running Man" starring Shin Ha-kyun, Lee Tae-ri and Kim Sang-ho. Directed by Jo Dong-oh ("The Restless" – 2006), "Running Man" tells the tale of Jong-woo who is on the run because of his coincidental involvement in a murder case. "Running Man" added just 143,619 (11%) admissions and moves on to 1,280,107. "Norigae" is a new entry in the charts and it comes from director Choi Seung-ho. "Norigae" is his Choi's second film as director, he first being "Fantastic Modern Gayagumer" which came out in 2011. "Norigae" probes a number of topical Korean social issues, such as high-profile suicide and Korea's buzzing entertainment industry. The film stars Ma Dong-seok, Lee Seung-yeon-I, Min Ji-hyun, Lee Do-ah and claimed 80,337 (6.7%) in its first weekend out.

At number five was the music-based British drama "Song for Marion" by Paul Andrew Williams. "Song for Marion" (aka "A Song for You") has received mixed reviews but was welcomed by the Korean market by 79,218 (6.3%) admissions. "To Rome with Love" was another new foreign flick to make it into the top ten this past weekend, this one is directed by the iconic U.S. director Woody Allen (who also wrote and stars in the film). Critics have proved harsh on his this latest work and Korean cinephiles have weighed in with just 47,169 (3.9%) admissions. Next was the fantasy film "Beautiful Creatures" by Richard LaGravenese, an adaptation of a novel of the same name by writers Kami Garcia and Margaret Stohl. "Beautiful Creatures" claimed 47,057 (3.7%) over 278 screenings around the country.

Into the bottom of the stack now and leading the charge was "G.I. Joe 2: Retaliation" with 26,597 (2%). "G.I. Joe 2" held forth last weekend, but a spew of new films both local and domestic saw it plummet to eight. The film now moves onto 1,842,438 total admissions. The charming romantic comedy "Very Ordinary Couple" also takes a bit of tumble, sinking from fifth to ninth with 23,675 (2%). Roh Deok film has amassed 1,847,780 admissions since its release late in March. Finally at number ten was "Ploddy The Police Car", which skidded down from seventh. This U.S/Norwegian production added 18,887 (1%) to drive its total admissions count in Korea to 50,619.