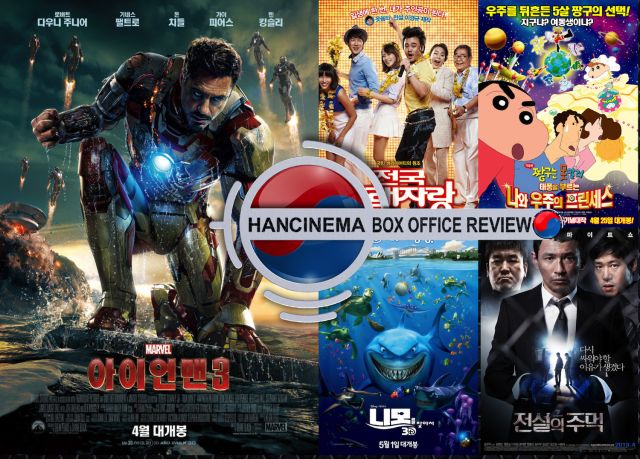 Tony Stark may be under some psychological pressure in his third outing but his Korean fans continued to storm the cinemas in support. "Iron Man 3" once again dominated proceedings over this past weekend, adding 1,865,121 (75%) admissions and bringing its total tally now to almost six million. That places Marvel's blockbuster as the third highest grossing release in Korea for 2013; just behind "The Berlin File" (7.1 Million), which it will surely surpass in the coming week. There were only three new entries that made the top grade this past weekend: Lee Jong-pil's "The Singing Contest, a re-release of "Finding Nemo 3D", and the Japanese animation "One Stormy Night".

After a tough few weeks in second, Kang Woo-seok's "Fist of Legend" slipped to fifth with just 50,651 (1.9%). "Fist of Legend" has been patiently hovering in second place behind both "Oblivion" and "Iron Man 3", and now has lost some steam in its fourth week. "One Stormy Night" is the first in a series of children's books by Yūichi Kimura. The tale tells of an unnatural friendship that forms as a goat named Mei and a wolf named Gabu travel together to find the 'Emerald Forest". "One Stormy Night" claimed 26,381 (0.9%) admissions and was followed by "Oblivion" which added just 22,355 (0.8%). "Oblivion" managed to hold down first during the middle weeks of last month and has since moved its efforts in Korea to 1,481,211 admissions.