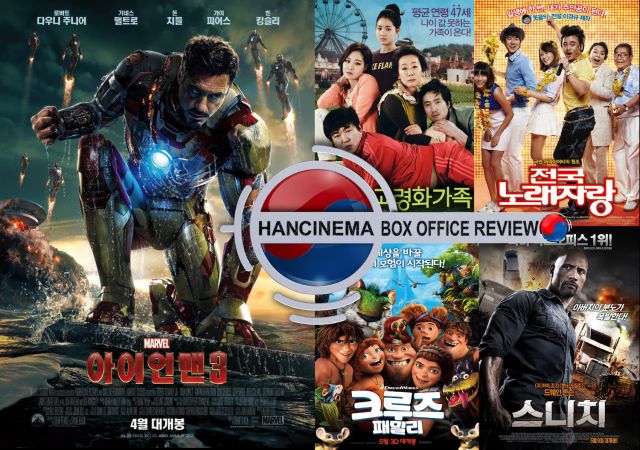 "Iron Man 3" once again defended its place at the top of the Korean box office, but this time there were a few new entries to help spread the wealth around. Marvel's metal magician added 1,039,876 (58.22%) admissions to its reign, moving it onto a total ticket count of 7.5M and to second in the list of Korea's highest grossing films of the year. Song Hae-seong sixth feature "Boomerang Family" and the new DreamWorks animation "The Croods" were among the some of more successful new releases that hit Korean cinemas this past weekend.

"Boomerang Family" is a family drama based off the 2010 novel "Aging Family" by Cheon Myeong-kwan. Song's film stars Park Hae-il, Yoon Je-moon, Gong Hyo-jin, Youn Yuh-jung, Jin Ji-hee and managed to opening with a healthy admissions count of 442,058 (23.4%).  "Boomerang Family" was followed by Lee Jong-pil's comedy "The Singing Contest" which slipped just the one place to third with 95,528 (8.7%). Lee's first fiction film now sits on a total ticket count of 794,601 after two weeks in the chart. At number four was "The Croods", produced by popular DreamWorks Animation, premiered at the 63rd Berlin International Film Festival in February and Korean audiences welcomed the film with a modest 53,031 (2.6%) admissions.

Dwayne Johnson returns in the crime drama "Snitch" along with Nigel Sinclair and Matt Jackson. "Snitch" was released in the States earlier this year, but has finally found its way onto Korean screens and claimed 23,902 (1.2%). The Japanese animation "Crayon Shin-Chan: Arasi Oyobu Ora To Uchi No Princess" fell three places with its 20,669 (0.9%) tally, and slipping two places we find "Fist of Legend" with 16,919 (0.9%). This is the fifth week for Kang Woo-seok's eighth film that has collected a little over 1.7M admissions thus far.

"To Rome with Love" is sticking around for a little while long, in fact climbing two places after sitting at number ten last week. "To Rome with Love" added 9,288 (0.4%) to bring its total tally up to 165,789 admissions in its forth week out in Korea. The re-release of "Finding Nemo", this time in 3D, managed to enter the charts at number four last week, but has sunk to ninth with just 5,868 (0.4%). Lastly, the French-Belgian romance film "Rust and Bone" by Jacques Audiard rounds this week's top films. "Rust and Bone" competed at the 65th Cannes Film Festival for the Palme d'Or (which was won by Michael Haneke "Amour"), and also managed to take home a number of other awards at the Cesar Awards, BFI London Film Festival, to name but a few. The film opened in Korea to 5,272 (0.3%) admissions, and has amassed almost 20,000 admissions in Korea since its release on the 2nd.