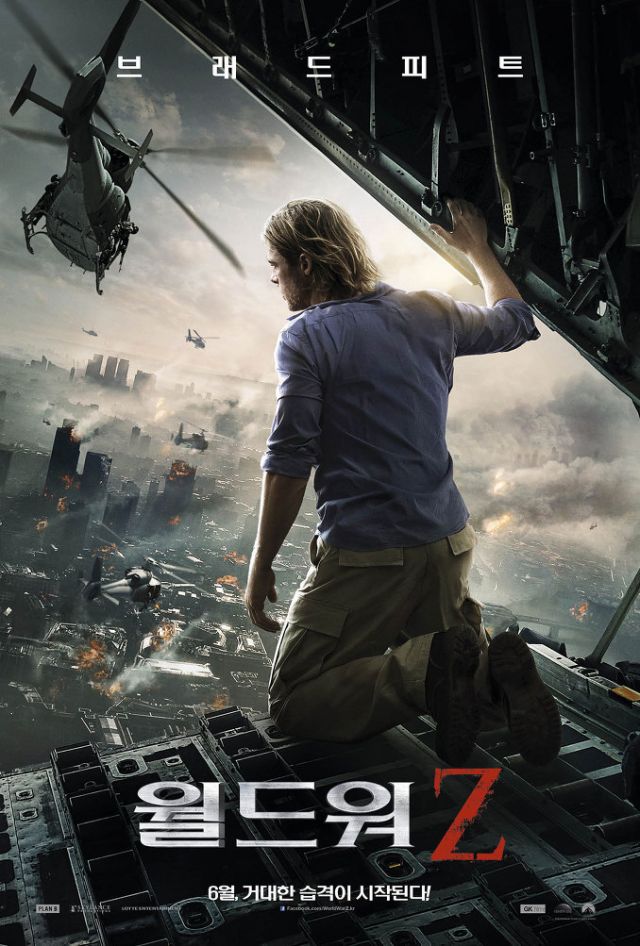 Marc Forster's "World War Z" continues its reign at the top of the Korean box office. Forster's post-apocalyptic horror cleared 933,807 (46%) admissions during its second weekend appearance, giving Brad Pitt's latest 3.1M admissions to take to the bank. The film cost $190M to produce and has already comfortably grossed $259M worldwide ($124M of which came from its own U.S. screenings). Last week the film easily dislodged Jang Cheol-soo's "Secretly and Greatly" at the top, pulling in over 800,000 tickets more than Jang's highly successful second feature. This week the Korean showing was a little limp, with only "Secretly and Greatly" and Kim Yong-gyun's "Killer Toon" making the grade.

Summertime is horror time in Korea, and with that comes Kim's new film "Killer Toon" starring Lee Si-young, Uhm Ki-joon and Hyun Woo. The film opened its account with 390,729 (18.6%) admissions and follows the webcomic creator Ji-yoon (played by Lee Si-young). Ji-yoon draws horror webcomics, but her work has an eerily strange connection to a series of murders that detective Ki-chul (Uhm Ki-joon) is trying to get to the bottom of. Kim Yong-gyun's previous features include "Wanee and Junah" (2001), "The Red Shoes" (2005), and "The Sword with No Name" (2009).

Jang Cheol-soo's latest film "Secretly and Greatly" may not have quite the same appeal as his previous revenge flick "Bedevilled", but this time Jang has gotten the formula just right for box office success. The film plays hosts to a string of popular male actors (Kim Soo-hyun, Park Ki-woong, and Lee Hyun-woo) and is actually based on Hun's hugely popular webcomic "Covertness". The film was released earlier in the month, and during its run the film has amassed an impressive 6.6M admissions, 231,782 (10.6%) of which came from this past weekend. "Secretly and Greatly" sits as the third highest grossing Korean film of the year, behind "The Berlin File" (7.1M) and "Miracle in Cell No.7" (12.8M).

Roland Emmerich's action-thriller "White House Down" was released this past week, claiming 274,756 (12.8%) admissions over 480 screens. The film stars Channing Tatum and Jamie Fox and has so far grossed $25.7M (with a $150M budget) at the U.S. box office. Its success meant that last week's number three ("Man Of Steel") was bumped down to fifth with 103,071 (5%); that's less than a third of its last weekend haul. Despite its movement towards the wrong end of the list, "Man of Steel" did managed to push past the 2M admissions mark. That's good enough to sneak itself into tenth on the list of highest grossing films released in Korea this year (number nine is currently the musical "Les Miserables" with 5.9M).

"The Croods" has had eight weeks in the top ten now and continues to remain steady as this week's number eight. This DreamWorks animation feature held the same position last weekend with 25,260, but does here with just 17,443, moving its total admissions count now to just less than 1M. "Star Trek Into Darkness" fell seventh to tenth and has seen its six weeks in the top ten yield 1.5M. A re-release of the Steven Spielberg's "Jurassic Park" (this time in glorious 3D) was one of new foreign films that came in, along with Justin Zackham's romantic comedy "The Big Wedding". "The Big Wedding" boasts an impressive ensemble of acting talent, including Robert De Niro, Katherine Heigl, Dian Keaton, Amanda Seyfried, Robin Williams and Susan Sarandon. The film scored 14,913 (0.7%) admissions in its first weekend outing over 166 screens around Korea.