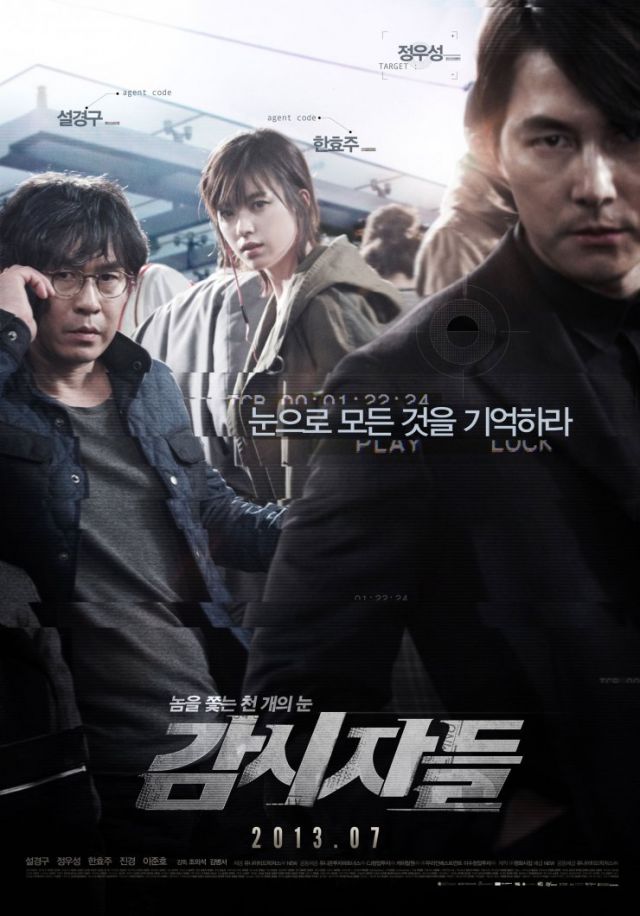 It is a shift from brain-dead to brilliant as Marc Forster's "World War Z" reluctantly relinquishes the crown to the local action drama "Cold Eyes". After two weeks at the top Forster's zombie epic was convincingly outvoted by this new Korean release that burst out the gates with 1.3 million admissions. Released on the third, "Cold Eyes" is the product of directors Cho Ui-seok ("Make It Big" and "The World of Silence") and cinematographer Kim Byeong-seo (directorial debut).

Starring Sol Kyung-gu, Jung Woo-sung, and Han Hyo-joo, "Cold Eyes" follows two highly observant and intelligent members of the Korean Police Forces Special Crime Unit (SCU). Chief Hwang and his newly appointed Yoon-joo must pull together if they are to stop James, the cold-hearted leader of a criminal organisation who continues to evade their nets. It is a battle of the brains that captured over 50% of the weekend's haul, displacing Brad Pitt's latest by more than 700,000. Do not feel too bad though, "World War Z" came in second with 630,626 and advances its total admissions count in Korea to 4.2 million.

"World War Z" now stands as the sixth highest grossing film released in Korean this year, and second in the list of foreign features. The film is now encroaching on Park Hoon-jung's "The New World" (4.6M) but will not be challenging the highest grossing foreign film of the year: "Iron Man 3" (9M). "World War Z" has enjoyed two consecutive weeks at the top, narrowly outplaying Jang Cheol-soo's latest film "Secretly and Greatly" and then "Killer Toon" last week.

Comparatively this weekend's sales were very top-heavy, with the top two films constituting 74.4% of all tickets sales. Add this week's third place finisher to that equation (Gore Verbinski 's "The Lone Ranger") and it creeps up to 82%. The prestigious power of it being a Bruckheimer film wasn't enough for "The Lone Ranger" to enter the charts any higher than third. This western vigilante film claimed just 207,891 (7.69%) across 400 screens, outperforming last week's number two, "Killer Toon", by the slim margin of just 15,000 admissions.

Kim Yong-gyun's "Killer Toon" managed to find 390,723 last weekend, but its opening effort wasn't followed-up here as Kim's summer horror saw its numbers sliced in half. "Killer Toon" claimed 192,437 (6.9%), advancing its total admissions count to 871,209. The only other Korean film to crack the top ten was Jang Cheol-soo's "Secretly and Greatly" which came in at number five with 111,394 to its name. Cheol-soo was the cinematic mind behind the grizzly "Bedevilled", but has found a more commercial formula and stars in "Secretly and Greatly" as it approaches 7 million admissions in its fifth week.

Roland Emmerich's "White House Down" fell three places to settle at sixth, the U.S. action flick added just 66,543 to bring its new total admissions count to 529,897. "The Man of Steel", "Jurassic Park" (3D), and "The Croods" mopped-up 34,688 admissions between themselves and were all outdone by the Chinese martial arts animation "The Adventures of Jinbao" (39,609).