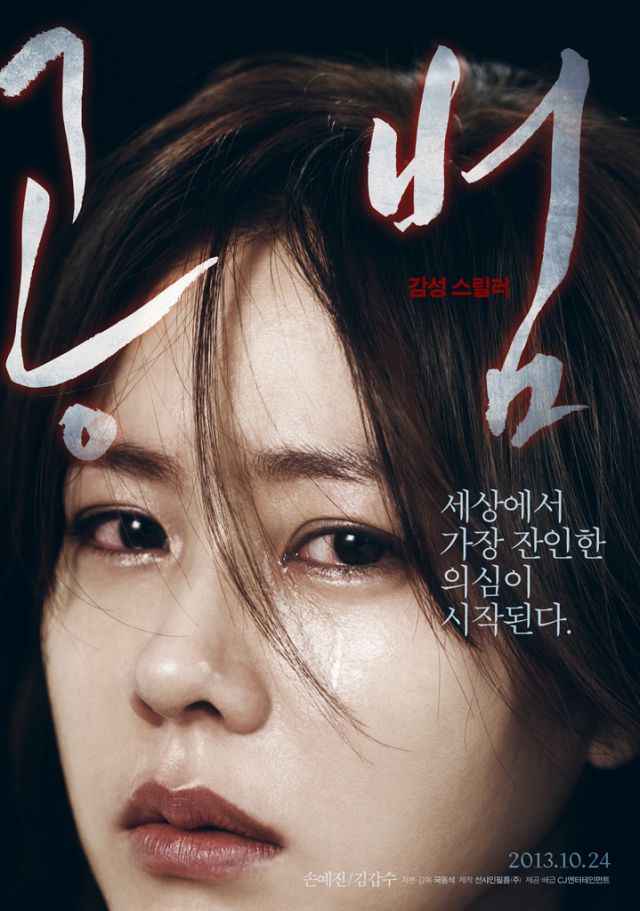 Gook Dong-seok's disturbing opening act "Blood and Ties" step into the game this past weekend and narrowly claimed the majority vote over last week's favourite: "Gravity". Gook's film drew in a spritely 648,192 filmgoers over 611 screens; a victory somewhat salted by the fact that Cuarón's 3D space thriller still floated away with most of the money (37.3%), for technical reasons. "Hwayi : A Monster Boy" and "Hope" gracefully gave way to Gook's debut, each taking about a hundred thousand admissions hit compared to their efforts last weekend. In addition to "Blood and Ties", Park Joong-hoon's "Top Star" and Shin Yeon-shick's "Rough Play" shook up the middle order somewhat; and the omnibus drama "If You Were Me 6" (4,853 admissions) almost became the fourth new Korean release to snare a top ten finish.

The movie/drama actress Son Ye-jin takes the lead in Gook's first solo flight in the director's chair. Son successfully appeared in last year's "The Tower" (5.1 millions admissions), and in 2011 she shared the screen with Lee Min-ki in the playful "Spellbound" (3 million). In Gook's domestic thriller she plays a daughter fighting to uncover and comes to terms with the truth about her father's past. "Blood and Ties" enjoyed highest amount of screens, 611, and technically it did manage to attract the most filmgoers; however its 648,192 admissions count was only good enough for 30.8% of the weekend's bottom line. That left plenty of wiggly room for "Gravity" (580,162) and its 3D capabilities to edge past the local newcomer, at a small price of course. "Gravity" managed 37.3% over 531 screens and its effort over the weekend now brings its total earnings in Korea to $15.5 million.

Last week's number two "Hwayi: A Monster Boy" claimed 169,192 (8.49%) admissions, but had to surrender a position in the process. Jang Joon-hwan's thriller still had enough in it though to keep ahead of Lee Joon-ik's new drama "Hope" (143,994). Lee's eighth feature scrambled 6.5% of the pie, a mouthful that now has "Wish" lying chubby on 2.5 million stubs. "Captain Phillips" was the only other foreign flick in the top five, it rose four places to fifth with 99,962 admissions (4.7%); a substantial improvement from the 10,579 it attracted last weekend.

Tom Hank's latest was closely followed by Park Joong-hoon's "Top Star" (94,551), another drama/thriller, but this time matters are moved from the domestic sphere to the k-crazed limelight as Uhm Tae-woong and Kim Min-joon battle for your gaze. This is Park's first time behind the camera but his mind's eye was help by the scripting work of Choi Seok-hwan ("Blades of Blood", "The King and the Clown"). At number seven was Shin Yeon-shick's thriller "Rough Play", which also takes a stab at a similar premise; and in fact also draws on some scripting 'mentoring', this time from one Kim Ki-duk. "Rough Play" claimed 63,030 (3%) admissions from a tough crowd in week one, a perhaps slightly disappointing arrival onto the scene. Ha Jung-woo's "Fasten Your Seatbelt" (26,616), Kim Je-yeong's "Queen of the Night" (14,870), and the slow-dying "Despicable Me 2" (5,782) closed out the weekend's top ten without too much fuss.