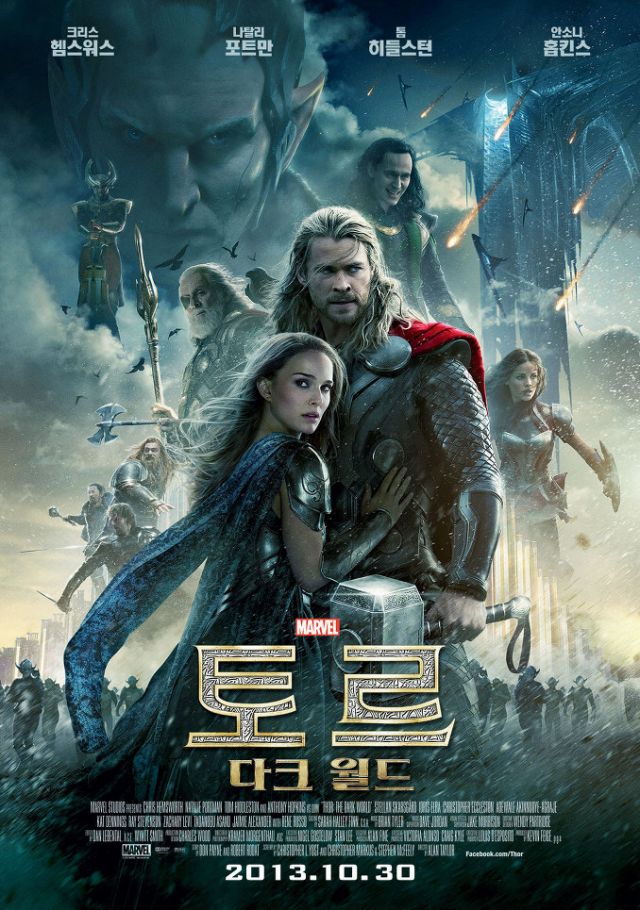 "Thor: The Dark World" has lit up the top of the Korean box office once again, claiming 655,484 (37%) over 711 screens to advance its total tally now to just over 2 million admissions. Marvel Comic's epic sequel has already grossed $327 million, almost doubling its production budget of $170 million as comic fans, kids, and cinephiles continue to pour in to the theatres to watch Mr. Odinson save the Earth day once again. The highest local flick came in the form of Park Hong-soo's "Commitment", an action drama that tackles Korea's fractured national identity and has Choi Seung-hyun's character torn between higher powers and those he holds dear. "Commitment" is the Park's debut feature and in it he enlisted the help of director/screenwriting Kim Soo-yeong ("Color of Woman", "Vampire Cop Ricky"). Last week no less than six Korean features found themselves in the top tier, however November's second weekend was less forgiving and forcefully ejected "Days of Wrath", "Hwayi : A Monster Boy", and "Top Star" from proceedings.

Alfonso Cuarón's "Gravity" was displaced by Park's opening entry and fell one position to second. The spacy thriller pulled in 244,622 (17.9%) admissions to move its fourth week's ticket tally to 2.7 million ($24.4M). "Gravity" has been a massive success worldwide and showcases two of Hollywood's top stars (Sandra Bullock and George Clooney) in this tech-feast space epic. And it has more than winked at next year's Oscar ceremony. Closely orbiting Cuarón's out-of-this-world feature was last week's number three "Blood and Ties". This is Gook Dong-seok's first film in the director's chair after having assisted with the directing duties in "Closer to Heaven" (2009), "Voice of a Murderer" (2006), and "You are my Sunshine" (2005). Last weekend Gook's freshman feature snatched 306,895 but was reduced to just 167,003 (8.7%) here as. It also marked the watershed point of this weekend's big winners and their more modest followers. "Blood and Ties" has now accumulated 1.6 million admissions, a haul that has Gook's movie sitting atop $10.8 million in its third week out in the open.

James DeMonaco's disturbing sci-fi horror/thriller "The Purge" attracted 67,934 (3.9%) over 232 screens to occupy fifth, closely followed by last week's number four "NO-BREATH". Starring Lee Jong-suk, Seo In-guk, Kwon Yuri, and Park Chul-min, "NO-BREATH" follows a group of young swimming talents as they prepare for a swimming competition that ends up testing more than just their aquatic abilities. The film added just 56,353 (2.77%) to its cause which brings its two-week tally to a stagnant 411,454 ($2.5M). The Spanish animation "Snowflake, the White Gorilla" managed to stick around for another top ten finish, climbing one place despite attracting less filmgoers (19,186) compared to last week's eighth place finish (28,815). Lee Joon-ik's eighth feature "Hope" (aka "Hope") is in its sixth weekend and during that spell Lee's drama has amassed 2.6 million admissions ($17.2M). Lee's film entered the charts early October in first, but has been slowly outgunned by a string of successful local debuts and international blockbusters. Lee's latest claimed just 16,654 (0.8%) and was closely tailed by Lasse Hallström's romantic drama "Safe Heaven"(15,741) in ninth. Rounding out this weekend's top ten was Henry Alex Rubin's "Disconnect", an American thriller that explores the negativedimension of our all-consuming digital lifestyles. "Disconnect" found 10,571 filmgoers to support its message, which left Choi Jin-seong's "Steel Cold Winter" and Shin Jai-ho's "Days of Wrath" hovering impatiently in the wings with 9,082 and 8,413 admissions respectfully.