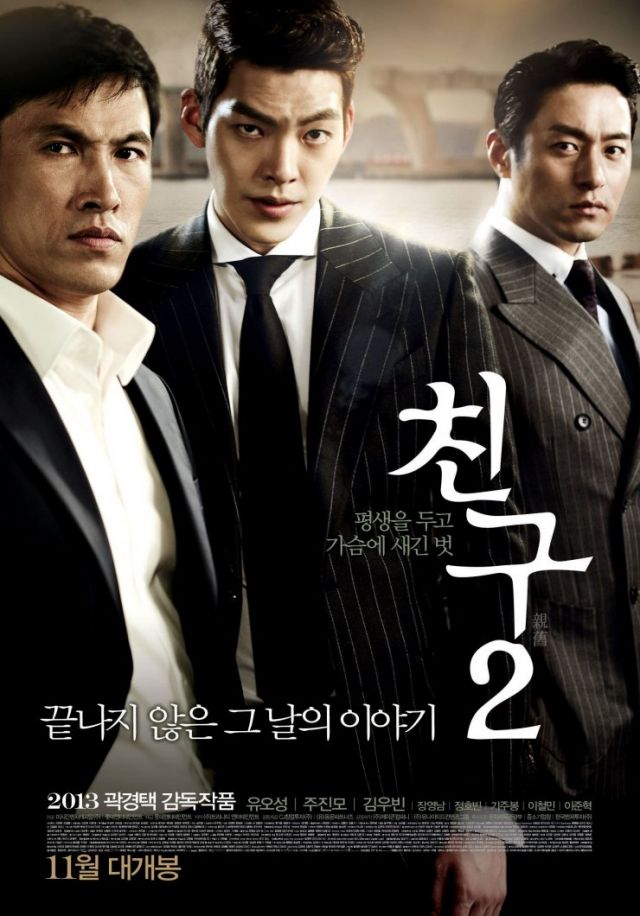 Kwak Gyeong-taek's "Friends 2" blew the God of Thunder away in its first weekend out. Kwak's latest is the sequel to his iconic debut "Friends" (2001) – a landmark feature which earned 8.1 million admissions to became the highest grossing Korean film since the nation's first real blockbuster "Shiri" in 1999. "Friends 2" broke the million admissions mark with the help of 968 screenings around the country, coverage that befriended 50.5% of all the filmgoers active over the weekend. Marvel's "Thor: The Dark World" was grounded due to unfavourable local conditions, dropping 47% from last week to just 346,931 (15.8%).  Jeong Yeon-sik's webcomic adaptation "The Five" and the documentary "Black Gospel" were the new Korean releases that managed to crack a top ten finish, while Ridley Scott's "The Counsellor" was the only new foreign feature that was competitive.

"Thor" has been flying around the top of the chart since late last month, but after two successive and successful weekends at that altitude Marvel's alien hero plummeted to just 346, 931 (15.8%). The comic book hero has already grossed $479M worldwide, but the superhero's premium shelf life just be coming into question. "Thor" was followed by Jeong Yeon-sik's debut feature "The Five" which managed third with 261, 725 (12.33%) over 491 screens. "The Five" is based off of a popular Korean webcomic and stars Kim Sun-ah, Ma Dong-seok, Shin Jung-geun, and Jung In-gi. The debutant came within striking distance of Marvel's hammer-yielding showboat, but with all eyes on Kwak's gangland return there simply weren't enough uncontested stubs up for grabs to mount a serious assault.

Alfonso Cuarón's spacy thriller "Gravity" has been floating around the Korean box office for five weeks now, during which the critically acclaimed drama has amassed 2.9 million admissions. "Gravity" claimed 128, 511 (8.3%) tickets over 288 screens. Its flight across Korea has, thus far, brought the blockbuster $26.7M; pocket change cosidering Cuarón's epic has already grossed more than $514M worldwide, making it the most commercially successful feature for both its leads (Sandra Bullock and George Clooney). Park Hong-soo's action drama "Commitment" took a tumble from second to settle at fifth in week two. Park's first feature claimed just 107, 009 (4.4%) after having opened last week with 426, 701. Still, this young-gunned spy special is approaching a million admissions, but will have to hope for a miraculous turn if it's to achieve more than this first milestone.

Ridley Scott's all-star feature "The Counsellor" graced proceedings but was only given a modest welcome of 63, 823 (3%); meanwhile CJ's "Blood and Ties" trailed in seventh with 26, 262 (1%). Last weekend "Blood and Ties" had high hopes as it held down fourth place with 167k, however, like Park's "Commitment", it was somewhat snubbed as it slipped towards the wrong end of the chart. It's not often that a Korean documentary (or any non-fiction feature for that matter) makes it into the top ranks, but the exception to that rule of thumb was given credence this past weekend by "Black Gospel". "Black Gospel" snuck in 16, 609 admissions from the fictional features to occupy eighth, a move that places its total tally at this early stage at almost 24k. Rounding out this weekend's list was the Spanish animation "Snowflake: The White Gorilla"(13, 028) in ninth, while the local sports drama "NO-BREATH" (8, 211) was left gasping on the fringes in tenth.