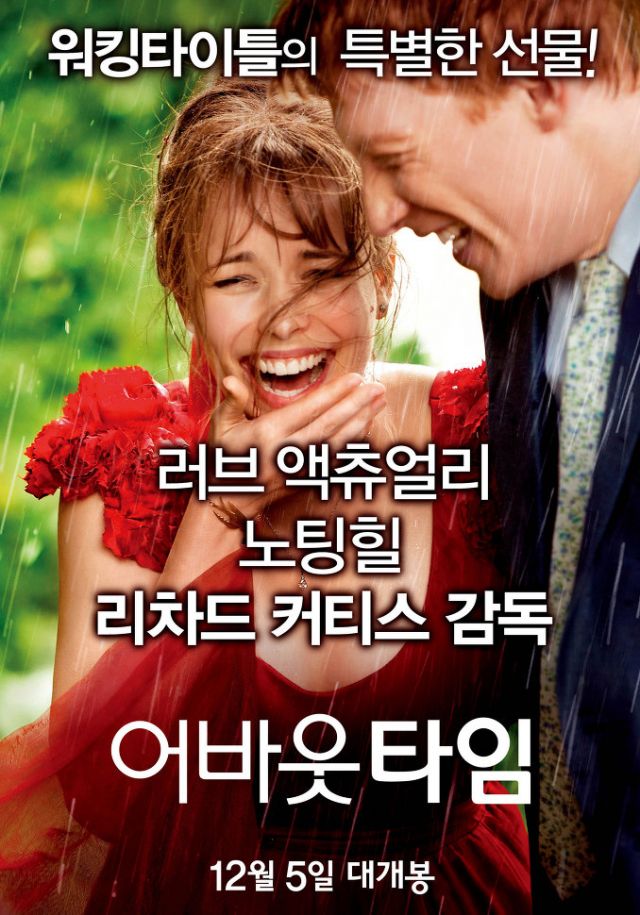 Richard Curtis's romantic comedy "About Time" and James Wan's supernatural horror "Insidious: Chapter 2" kept the local flicks at bay with a one-two finish for the away team. "About Time" claimed 477,267 (29.5%) admissions over 568 screens to secure the top spot while Wan's sequel attracted 225,734 (13.2%) filmgoers to his highly profitable horror franchise. Last week's number one, Kim Hyun-seok's "11 AM", slipped two places in light of the above new entries, and walked away with just 158,978 (9.4%) stubs in week two. Similarly, Hong Ji-young "Marriage Blue", Kwak Gyeong-taek's "Friends 2", and Lee Deok-hee-I's debut feature "Tumbleweed" all fell accordingly as Korea's final quarter continued to flat line after its stunning and recording-breaking Autumn figures.

Foreign love and alien ghouls were the choice pleasures for Korean audiences as 42.8% of the crowd gave their hard-earned won to the top two U.K. and U.S. imports. "Insidious: Chapter 2", like the original, has proven a plump cash cow for Wan and has already grossed $155M from a budget of just $5M. Korean audiences have bitten as well with the film's opening scare scoring it $1.8M, while "About Time" banked a heart-felt $4M of its own. Last week "11 AM" was top with 377,160 - a ticket tally that dropped sharply here (its second week out) to just 158,978. That advances the sci-fi flick now to 784,350 admissions and so it will have to soldier on if it hopes to breach the million admissions mark.

Sony Pictures Animation's "Cloudy with a Chance of Meatballs 2" managed to rise in the charts, climbing from last weekend's number six (194,587) to number four (153,167) despite the lower haul. The computer-generated sci-fi has already grossed $213M worldwide, and its efforts in Korean have allowed it to pocket $4.5M since it was released late last month. Meanwhile, Hong Ji-young's omnibus drama "Marriage Blue" cleared the million mark at settled for fifth, adding 128,680 subs to bring its total tally now to 1,097,786 ($7.2M). The aged-action thriller "Escape Plan" (starring Sylvester Stallone and Arnold Schwarzenegger) followed in sixth with a flaccid 112,355 (6.7%), while "Catching Fire" continued to tumble towards the wrong end of the chart with 98,067 (5.8%). "Catching Fire" - based on the second novel in Suzanne Collins's "Hunger Games" trilogy - has filled its worldwide coffers with $673M thus far, but Korean audiences have been largely unimpressed, contributing just $6.9M to blockbusters recording-breaking bottom line.