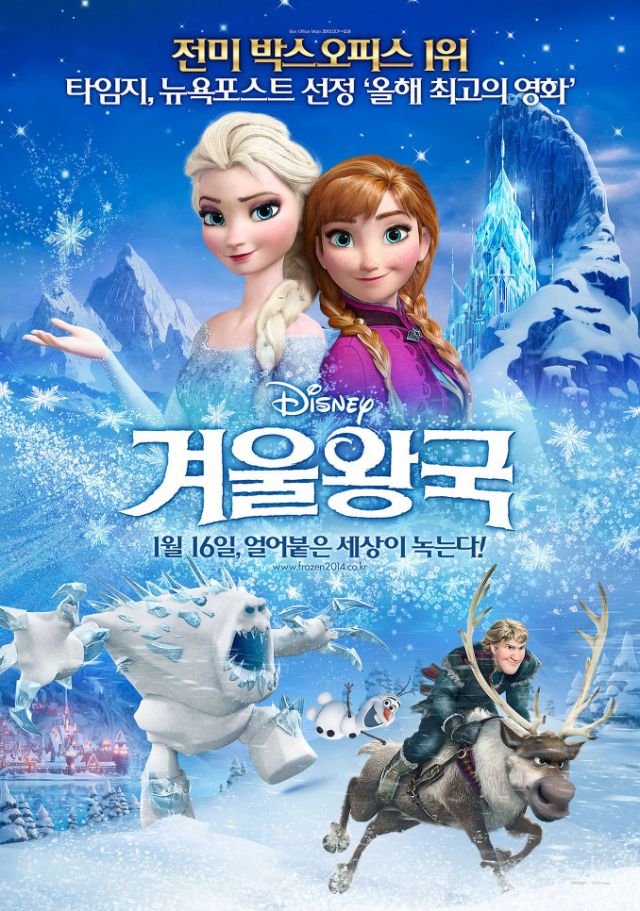 After four consecutive weeks at the top of the pile, Yang Woo-seok's "The Attorney" has finally given way to Walt Disney Picture's "Frozen" (1,036,102 admissions). The Oscar nominated animation has already grossed $759M worldwide and arrived on Korean shores to the delight of more than a million filmgoers. "Frozen" captured 41.4% of the market share to dislodge Yang's true-life drama and deny it a fifth straight week as Korea's number one. However that didn't overshadow the fact that this past week saw "The Attorney" breach 10 million admissions (10,162,511 - $69.5M), and it now joins an elite, and ever-growing, list of Korean films who have achieved such an incredible feat.

Yang Woo-seok's "The Attorney" added 510,759 (19.8%) admissions over this past weekend to become the ninth highest grossing Korea film of all-time, which places it above Bong Joon-ho's "Snowpiercer" (9.3M) and Han Jae-rim's "The Face Reader" (9.1M). The last Korean film to reach 10 million admission was "Miracle in Cell No. 7" (2013), and before that it was "The Thieves" and "Masquerade" (both of which came out in 2012). Korea's all-time top ten has now almost completely become a 10 million admissions club, with only "Snowpiercer" in tenth having not reached that mythical mark.

Kenneth Branagh's "Jack Ryan: Shadow Recruit" claimed 210,731 (8.11%) over 419 screens to take third place; an action thriller that follows critically acclaimed novelist Tom Clancy's character in a $60M production. The film, unlike previous adaptations, does not follow a particular book of Clancy's and instead is an original story; Tom Clancy died at the age of 66 last October and so the film has been dedicated to him. Martin Scorsese's "The Wold of Wall Street" came into the Oscar race late in the day, but has been nominated in five categories including Best Picture, Best Director, and Best Actor. Korea audiences welcomed the film with 129,298 (5.3%) admissions which was just good enough to push Seong Si-heup's comedy drama "Plan Man" (116,395 - 4.3%). down to sixth. "Plan Man" was released on the ninth and has struggled to find and ignite interest, attracting thus far just 602,306 admissions ($4M) from the locals.

In seventh was another animation, this time in the form of Germany's "TARZAN 3D". Last week this high-flying flick managed third with 344,943 admissions, however with the recent influx of popular and praised imports, the film slumped four places and claimed just 104,944 admissions (3.9%) in week two. "The Secret Life of Walter Mitty" followed with 57,674 (2.3%) while Lee Gi-wook's "The Murderer" (starring Ma Dong-seok and Ahn Do-kyu) struggled in ninth with just 48,158 (1.9%). Lastly, the weekend's top ten was rounded out by the Japanese animation "Pokemon the Movie: Genesect and the Legend Awakened" (45,536 – 1.6%) which fell four places.