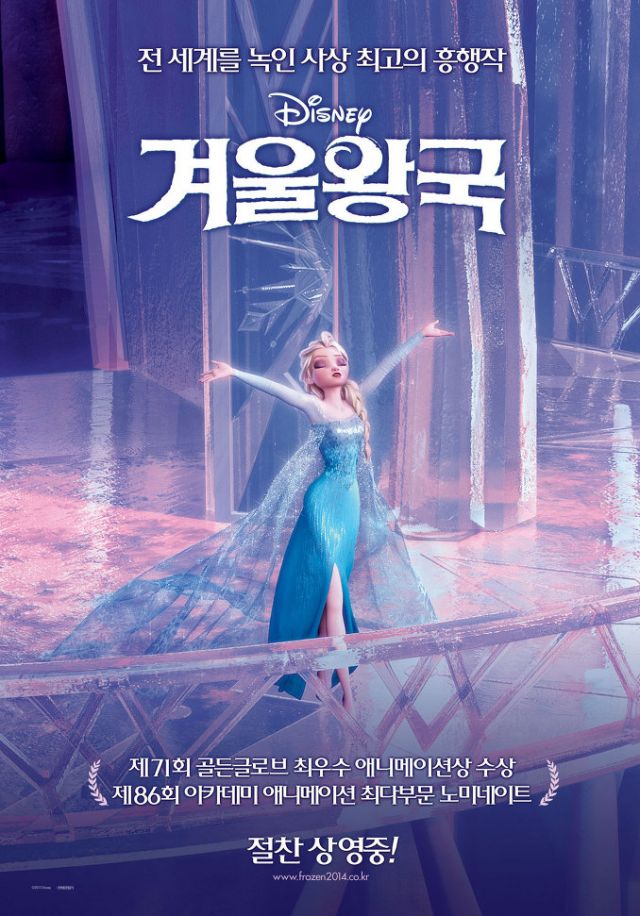 Walt Disney's "Frozen" recently won the Best Animation award at this year's BAFTA, but Korean fans have known about its magic for weeks now. After five weeks the film is still running hot at the top of Korea's box office and, despite ticket sales falling somewhat, the film has now raced to more than 8.9 million admissions and is still going strong.

After regaining the crown last week from Hwang Dong-hyuk's "Miss Granny", "Frozen" has managed to remain Korea's movie of choice having racked up 747,416 admissions (29.9%) over the weekend. In fact, both Disney's latest and Dong-hyeok's drama remained unmoved at the top of the pile, and that's despite the release of the must-anticipated "Robocop" and two new local entries in the form of "Venus Talk" and "Apostle".

Two weeks ago Hwang's "Miss Granny" (starring Shim Eun-kyung and Na Moon-hee) overthrew "Frozen" at the top by claiming 1.7 million admissions (34%) over the massive Lunar New Year holiday (the largest in fact). Since then, however, Disney's animation has come back firing and, despite the relatively narrow margin, has remained there ever since. "Miss Granny" claimed 680,930 admissions (24.5%) this past weekend that helped its total tally move on to 6.9 million ($47.5M); an impressive stack of stubs that some critics feel is rather generous and perhaps not a true reflection of the quality of the feature. Still, Hwang's comedy drama has proved profitable and continues to be well supported in the wake of the Lunar New Year rush that spurred its success.

In addition to these two juggernauts tussling it out at the top, there were a few foreign and local features that managed to make themselves know. José Padilha much-anticipated science fiction flick "Robocop" arrived last week, and with the help of 627 screens it captured 18.8% of the market share (509,000 admissions). This action event was inspired by the 1987 film of the same name and stars Joel Kinnaman as the broken man behind the techy suit. The film had a hefty budget of around $130M but has not yet managed to move itself into the black, an effort that Korean audiences seem uninspired to radically rectify.

Padilha's remake was followed a new local entry: Kwon Chil-in's "Venus Talk" starring Uhm Jung-hwa, Moon So-ri, and Jo Min-soo. This, Kwon's fifth feature, is a racy comedy that follows three career woman in their 40s and tackles live, love, and mature friendship. Kwon's previous features include "Singles" (2003), "Hellcats" (2007), "Loveholic – Movie" (2009) and the cute romantic comedy "Wonderful Radio" that came out in 2011. All of which detail love in various forms, but Kwon's latest has chosen to focus on mature relationships and opened its account in fourth place with 272,605 admissions (10.3%).

Falling a little more off the pace in sixth was Kim Jin-moo's "Apostle", a true story about a group of churchgoers who were persecuted in the North and try to head South. The film claimed just 94,850 admissions (3.4%) in week one over its allocated 262 screens. Closely behind "Apostle", and down one place, came Kim Tae-yoon's "Another Family", another true-life inspired film that added 96,262 admissions (3.3%) to its cause. This is the second week for Kim's true-life drama and it so far it's amassed 358,685 admissions ($2.5M).

"Detective Conan" is popular Japanese animation and the latest in the franchise ("Detective Conan: The Pirate Eye's Requiem") recently came to Korea's shores to refresh its foreign fan base. The animation claimed 84,897 stubs (2.7%) over 294 screens to hold entry into seventh place, and was followed by Han Dong-wook's "When A Man Loves A Woman" with its 57,609 (2.1%). Last weekend Han's drama was all the way up in third (although it did so with only 212,021), but fell from grace here rather sharply in the light of other, newer, releases. Thus far "When A Man Loves A Woman" has claimed 1.9 million admissions ($13.3M) in four weeks. Lastly, it was "The Lego Movie" (34,951) and "Escape from planet Earth" (20,919) that brought in the rear, and between them they claimed less that 2% of this past weekend's spoils.