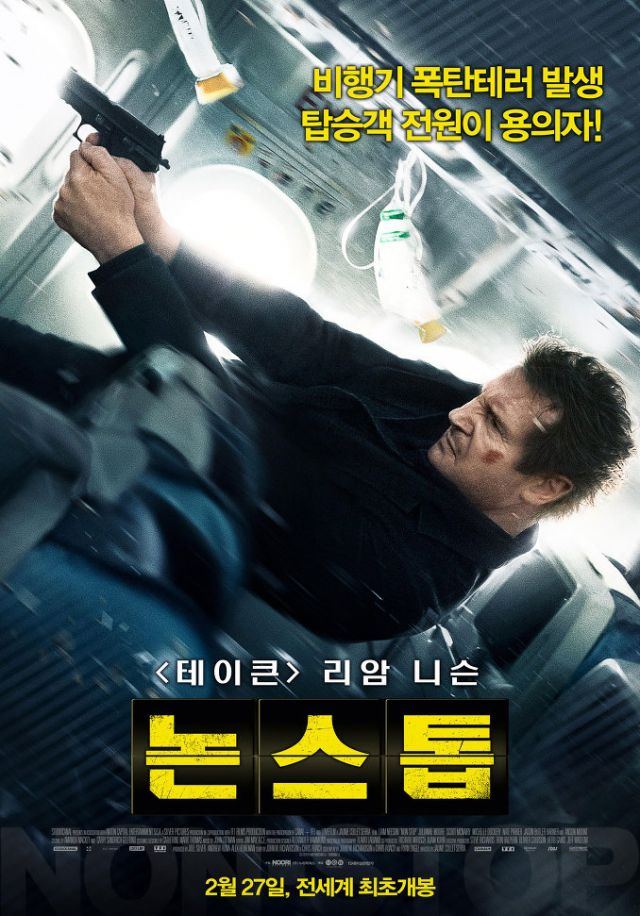 Paul W. S. Anderson's disaster epic "Pompeii" failed to retain the top spot this past weekend as the mystery thriller "Non-Stop" flew into first without contention. "Non-stop" managed to capture 33.7% of the sales (704K admissions) as it open its account with more than double that of its nearest rival. The film, which stars Liam Neeson alongside Julianne Moore, Scoot MacNairy, and Michelle Dockery, was given 582 screens in week one and secured pole position with plenty of elbow room. The only other new features to make it into the weekend's top films were 20th Century Fox's "The Monument Man" and the Oscar-winning drama "12 Years a Slave".

Last weekend "Pompeii" dislodged "Frozen" at the top to challenge the Oscar-winning animation's impressive and record-breaking run. However that glory didn't last long as the disaster flick was bumped promptly down to second with just 299,792 admissions (14.2%), a modest haul but one representative of very quiet week that still managed to push Anderson's epic past the million-admissions mark. That fire and brimstone was closely tailed by Hwang Dong-hyuk's "Miss Granny" in third, the same position Hwang's film held last weeked, although the 276,513 tickets (12.8%) it scored here was about a hundred thousand light of last week's effort. Hwang's comedy drama has performed extremely well thus far, amassing 8.1 million admissions ($55.4M) since its release late in January.

The 86th Academy Awards were held last night and the ceremony awarded Disney's "Frozen" with its Best Animation award. "Frozen" came out halfway in January and has since become the highest grossing animation in Korea with more than 10 million admissions ($75.1M) to its name. Kim Kwang-sik-I's drama "Tabloid Truth" entered the chart in second last weekend with over 400K admissions, however that initial excitement failed to extend into week two as the film slumped to fourth with just 229,275 (10.9%). Still, that small take was enough to push "Tabloid Truth" over the million admissions mark ($7.1M).

The big winner at last night's Oscar ceremony was Steve McQueen's historical drama "12 Years a Slave" starring Chiwetel Ejiofor, Micheal Fassbender, Benedict Cumberbatch, and Paul Dano. The film, which is based on the 1853 memoirs of the same name by Solomon Northup, won Best Picture as well as Best Support Actress (Lupita Nyong'o) and Best Adapted Screenplay (John Ridley). "12 Years a Slave" opened in Korea in sixth with the support 94,215 eager filmgoers (4.3%), and was followed by the American-German war film "The Monuments Men" (43,772 – 2%) in seventh. Kwon Chil-in's "Venus Talk" (40,735 – 2%) and Kim Jin-moo's "Apostle" (33,960 – 1.5%) occupied eighth and ninth respectfully, while the sci-fi action remake "RoboCop" settled in tenth with 25,977 (1.1%).