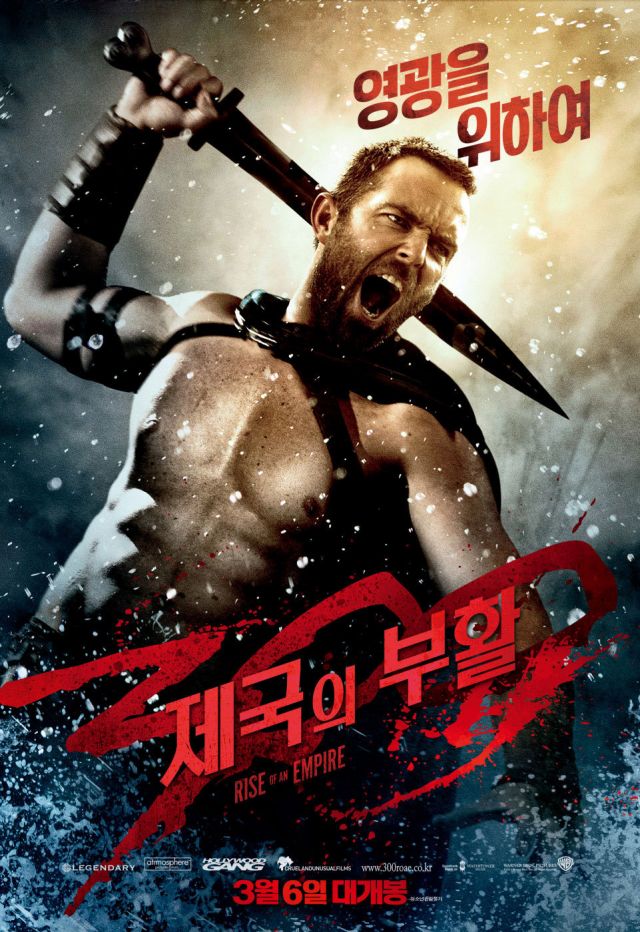 It's been hard going for local flicks the past month. "Frozen", "Pompeii", and "Non-Stop" have all occupied the top spot but have been unable to hold onto that position. Now a new contender has come forth in the form of Noam Murro's "300: Rise of an Empire", an epic action fantasy sequel to the 2006 film "300". The film, which is based on a graphic novel by Frank Miller that is still to be released, claimed 661,909 (40.6%) over 720 screens to stand as the country's new number one. It was an epic start to its campaign as it dislodged "Non-Stop" at the top of the pile to take gold.

Last week "Non-Stop" claimed more than 700K but bowed in week two to Murro's bloodly sequel with only 395,833 (21.9%) fans in its camp. Hwang Dong-hyuk's "Miss Granny" followed with 145,181 (7.8%) of its own to occupy third. "Miss Granny" was released during the last week of January, capitalised on the Lunar New Year crowds, and has since been Korea's highest performer collecting almost 8.5 million admissions during its lengthy run. Hwang's comedy drama has remained solid in third for three weeks now, before then second, and was even able dislodge the Oscar-winning "Frozen" over the frantic Lunar New Year weekend.

Last week saw the conclusion of the 86th Academy Awards and a number of those nominees and winners have been making the rounds in Korea. Before the ceremony revealed its picks Korea was already behind "Frozen", and in the last two week's "12 Years a Slave (winner of the Best Picture award) and "Dallas Buyers Club" have been campaigning for stubs in the South. "12 Years a Slave" may have stunned American crowds, but the historical significance of the film has been less supported in Korea as it added just 108,202 (5.8%) to its new total tally of 299,554 ($2.1M). Steve McQueen's award-winning biopic was followed by "Pompeii" (97,098 – 5.8%) and then "Frozen" (the most successful animation ever released in Korea) which claimed 96,098 (5.5%) admissions during its eighth week in the country's top ten.