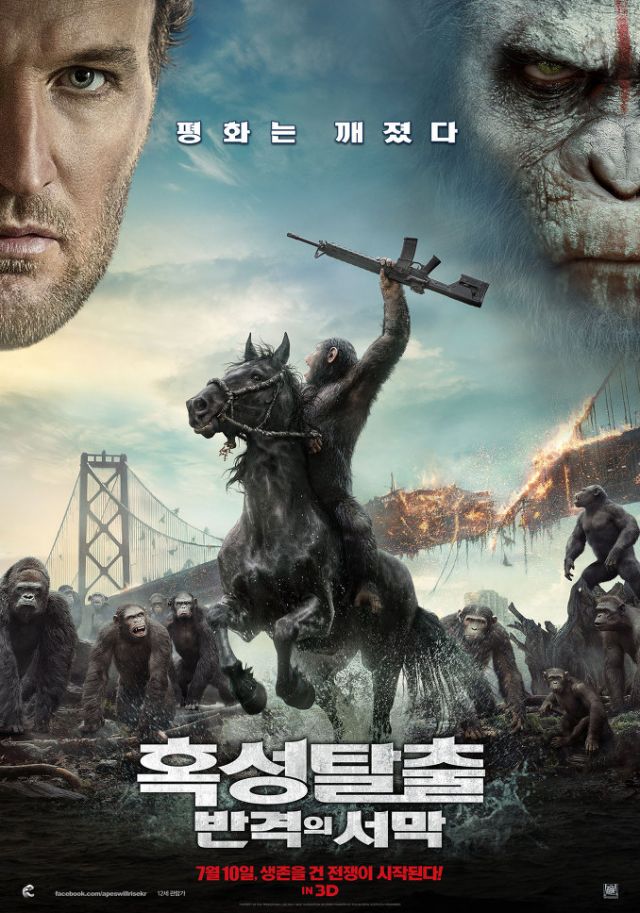 Prime gives way to primates as a new king is crowned...

"Dawn of the Planet of the Apes", the sequel to the 2011 film "Rise of the Planet of the Apes", recently hit Korean shores and dislodged Bay's "Transformers" at the top of the pile. Matt Reeves' film captured more than 47% of the box office pie (1.3M admissions) over 919 screens to break the hat-trick "Transformers" was eyeing. Still, Bay's bombastic blockbuster held firm in third, while Jo Beom-goo's drama "The Divine Move" stayed umoved in second place with 925K (23%).

"The Divine Move", Jo Beom-goo's fourth feature, stars Jung Woo-sung, Lee Beom-soo, Ahn Sung-ki in a high-stakes action flick that involves underground gambling, revenge, and one of most complex board games around, Go. Jo Beom-goo's last film "Quick" (starring Lee Min-ki and Kang Ye-won) attracted more than 3.1M filmgoers back in 2011, and his latest is looking set to overtake those figures. The film had to confront some stiff competition in the form of the titanic "Transformers: Age of Extinction", as well as Reeves' popular sequel, but despite these foreign franchises the film made good use of its allocated 683 screens in week two and now has a total tally of over 2.3M ($19M).

"Transformers" may have slipped a couple places in the chart, but with its weekend's haul the big budget Hollywood flick now moves onto 4.9M admissions in Korea ($40.7M); making it the fourth highest grossing film of year having just overtaken "Edge of Tomorrow" and its 4.5M. However it's unlikely that Bay's latest will have the steam to propel it pass the 5.6M claimed by "The Attorney".

Third and fourth place were held by local features in the form of Lee Do-yoon's "Confession" and Oh In-chun's debut "Mourning Grave". "Confession", which stars Ji Sung, Ju Ji-hoon, and Lee Kwang-soo, was released on the tenth and opened its account over the weekend with 148K (5.4%). Last weekend Oh In-chun's opening act claimed third place with 216K, however week two for this high school horror saw it slip to fifth with 76K (2.4%). "Mourning Grave" has now attracted 458K ($3.3M) of Korea's summer crowds.

Following on from those two local favorites came William Eubank's sci-fi film "The Signal" starring Laurence Fishburne, Brenton Thwaites, and Olivia Cooke. The film claimed 42K admissions (1.5%) and was followed by Kim Seong-hun's action drama "A Hard Day" in seventh. "A Hard Day" has been in the charts for an impressive six weeks now, during which the it's attracted over 3.4M filmgoers ($26.4M) to its cause. This, Kim's second feature, only just managed to outperform "Edge of Tomorrow" and its 18K--another foreign sci-fi whose hefty 4.6M makes it the fifth highest grossing film of year thus far. Lastly, the weekend was rounded out by the Israeli animation "VIPO : Adventures of the Flying Dog 2" (10K - 0.3%) and the critically acclaimed drama "Her" by Spike Jonze (4.9K - 0.1%).