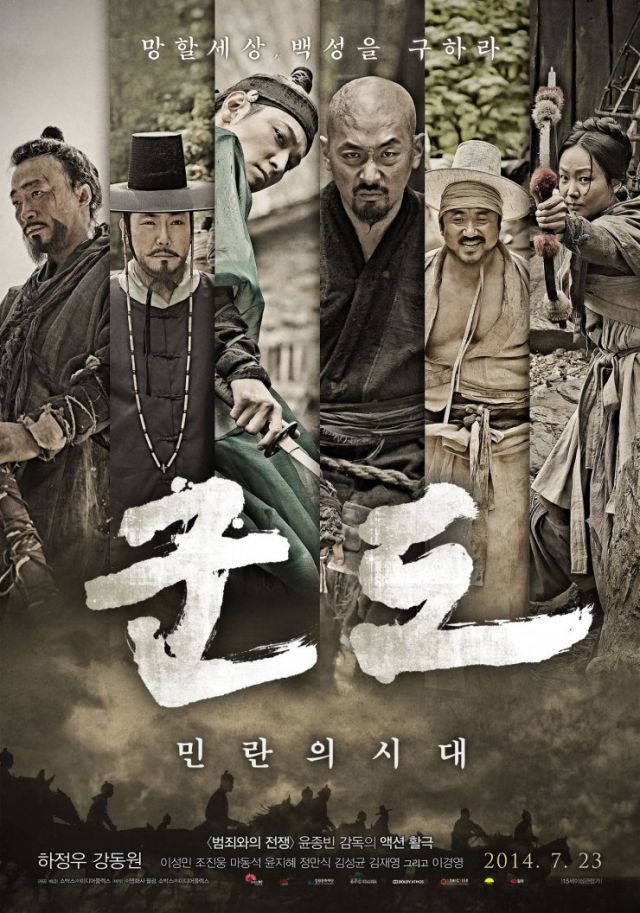 It's been nine weeks since a Korean film last held the top spot in its own box office, but finally a local flick has managed to reign true. Last week Yoon Jong-bin's much-anticipated "KUNDO : Age of the Rampant" was released and captured over 61% of the sales (2.1M admissions). The film, whose scintillating cast includes the likes of Ha Jung-woo, Gang Dong-won, Lee Sung-min, Ma Dong-seok among others, opened to an incredible 1,394 screens around the country and Korea its first film at the top of pile in over nine weeks.

"KUNDO" first had to dislodge Matt Reeves' "Dawn of the Planet of the Apes" at the top; a foreign blockbuster that, including the 322K (9%) it claimed over this past weekend, has thus far amassed over $29.1M (3.7M admissions) in Korean alone. No easy task to be sure, but Yoon's Robin Hood-style period piece also had to contend with another hot sequel in "How To Train Your Dragon 2" (735K - 22.6%) which was also released last Wednesday. However despite the stiff competition, "KUNDO" opened its account with gusto and walked away the undisputed must-see film of the week.

In fourth place, and down two places, came Jo Beom-goo's action drama "The Divine Move" starring Jung Woo-sung, Lee Beom-soo, Ahn Sung-ki, and Kim In-kwon. Jo's film entered the fray at the beginning of July and has been Korea's number one contender ever since. "The Divine Move" claimed 118K admissions (3.5%) over this past weekend to move its total tally now to 3.4M ($27.5M). That means it has now overtaken Kim Seong-hun's "A Hard Day" (with its 3.4M admissions) as the fourth highest grossing Korean film of 2014 (ahead of "The Divine Move" in that list still stands "The Fatal Encounter" - 3.8M, "The Attorney" - 5.6M, and the comedy drama "Miss Granny" - 8.6M).

Fifth position marked the watershed for success in this week's chart with the seventh installment in the "Ju-on" Japanese horror franchise, "Ju-on: The Beginning of the End", claiming just 29K (0.8%), followed closely by Michael Bay's "Transformers: Age of Extinction" (23K - 0.6%). This is the fifth weekend for Bay's blockbuster, and during its Korean run the Hollywood giant has attracted over 5.2 million Korean filmgoers ($42.7M).

In seventh was the American comedy drama "Frances Ha" by Noah Baumbach (who also wrote the screenplay for the film along with Greta Gerwig, the film's star). The film climbed up two places from last week and has thus far been enjoyed by over 41K moviegoers in Korea. Following Noah's critically acclaimed effort was the 2013 French comedy "Attila Marcel". Unlike Noah's drama, "Attila Marcel" has received rather mixed reviews back home (with the influential French periodical Cahiers du cinéma giving it a devastating 1/5), but all the same over 10K Korean's came out to support and experience it for themselves.

Spike Jonze's "Her" made a surprising reentry into the top ten. After teetering in tenth for two weeks Jonze's comedy drama was finally ejected from the list last week, only to return here to claim a ninth week in Korea's top ten. "Her" added another 5.4K to its Korean cause which brings its total tally now to 338K. The last weekend of July was closed with another big-budget historical epic: Kim Han-min's "Roaring Currents". Although officially set for released this coming Wednesday, fans of this much-anticipated cinematic imagining of Admiral Yi Sun-shin greatest battle simply could not wait for this promising epic to land.