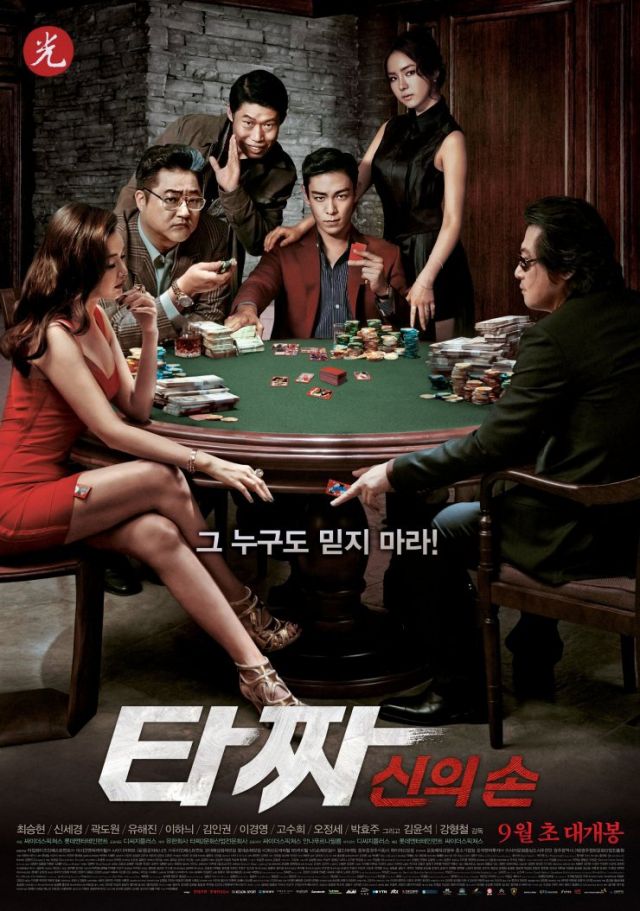 "Tazza: The Hidden Card" had a fantastic week and managed to extend its lead at the top of pile. Kang Hyeong-cheol's comedy drama attracted over 540K filmgoers (26.7%) over the weekend to move its total tally now to 3.1M ($24.6M), which makes it the ninth highest-grossing Korean film of 2014 having just overtaken Director Chang's "The Target". Kang's closest competition came in the form of the American musical drama "Begin Again" and its 351K (17.1%), but otherwise the top ten remained largely unchanged except for Frank Miller's neo-noir "Sin City: A Dame to Kill For" creeping in at ten.

Last week Steven Quale's "Into the Storm" fought its way back to third having taken a tumble the weekend before. "Into the Storm" claimed 225K stubs to puts its new admissions total in Korea at 1.8M ($14.5M), and was closely tailed by Luc Besson's sci-fi action flick "Lucy" (225K – 11.3%). Last weekend "Lucy" say pretty in second place with over 621K to its name, and with the weekend's latest haul Bresson's latest now moves onto 1.7M admissions.

Lee Seok-hoon's popular period piece "Pirates" continued its slow decent out of favour as it slipped another spot to fifth. Lee's action adventure scored 205K (9.6%) from 464 screens to advance its total tally now to 8.3M ($61.8M). However "Pirates" still needs around another 300K to surpass "Miss Granny" as the second highest grossing Korean film of year.

Lee Jae-yong's touching family drama "My Brilliant Life" entered the fray on the third and has now amassed, with the additional 194K (8.8%) it scored over the weekend, over 1,4M admissions ($10.8M). "My Brilliant Life" also marks the watershed in this week's chart with our next entry, "Step Up: All In", only managing 95K admissions (4.4%) and remains unmoved in seventh.

In eighth, and also stubbornly staying put, came the unstoppable "The Admiral: Roaring Currents" by Kim Han-min. The film has managed to smash any and all records that came before its 30 July release, and has been doing a victory lap at the bottom half of the chart for the last two weeks. Kim's box office Champ added another 71K (3.3%) to bring its already gargantuan bottom line to 17.5M ($130M). Lastly, this past weekend's top ten was rounded out by "Maya The Bee 3D" (50 K) and neo-noir adaptation "Sin City: A Dame to Kill For" (45K).