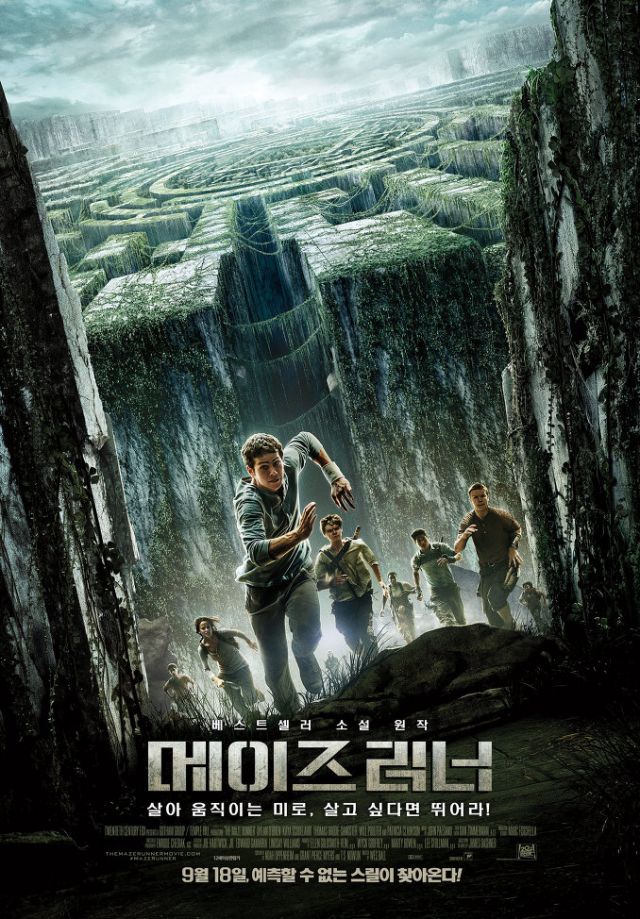 "The Maze Runner" remains unchallenged at the top…

Wes Ball's science fiction film "The Maze Runner" managed to remain Korea's top showing over the last week of September. Ball's adaptation has been a huge success, and has already grossed over $148m worldwide. The film's second weekend in Korea was less than stellar, but the 572K admissions (43%) it claimed was enough to secure its place at the top of pile.

Last weekend's two and three, the American musical "Begin Again" and Kang Hyeong-cheol's "Tazza: The Hidden Card", remained unmoved with 267K (20%) and 132K (10%) respectively. With the weekend's haul added, "Tazza: The Hidden Card" now moves onto 3.8M admissions ($29.9M) and is the verge of offer taking Lee Jae-gyoo's "The Fatal Encounter" as the sixth highest grossing Korean film of the year.

In fourth place came Naomi Foner's drama "Very Good Girls". The filmed premiered at the Sundance Film Festival back in January, and has since made its way to Korea where it was greeted by an opening weekend by 57K (4%) Korean filmgoers. It narrowly outplayed Lee Seok-hoon's popular "Pirates" and its 53K (4%). "Pirates" has now amassed a total tally of 8.5M ($63.2M) and stands firm in third in the list of highest grossing Korean films of 2014. The only two films above it are Hwang Dong-hyuk's "Miss Granny" (8.6M) and Kim Han-min's "The Admiral: Roaring Currents" (17.5M).

"Pirates" was the only other Korean film to crack a top ten finish, and from then on the foreign flicks flourished. Last week Scott Frank's adaptation "A Walk Among the Tombstones" held fourth with 99K, but the crime thriller slipped during the course of the week and had to settle in sixth with 41K (3%). In seventh, and down just the one place, came Steven Quale's "Into the Storm" on 26K (1.9%) and German animation "Maya the Bee" (18K – 1.3%) which climbed to eighth after having occupied ninth last weekend with 25K.

The last weekend of September was rounded out by the animation "Frank", by Lenny Abrahamson, and Luc Besson's sci-fi action flick "Lucy". "Frank", a collaborative effort between the United Kingdom and Ireland, claimed 17K admissions (1%) over 207 screens, while Besson's latest added another 15K (1%) to bring its total tally in Korea now to 1.9M.