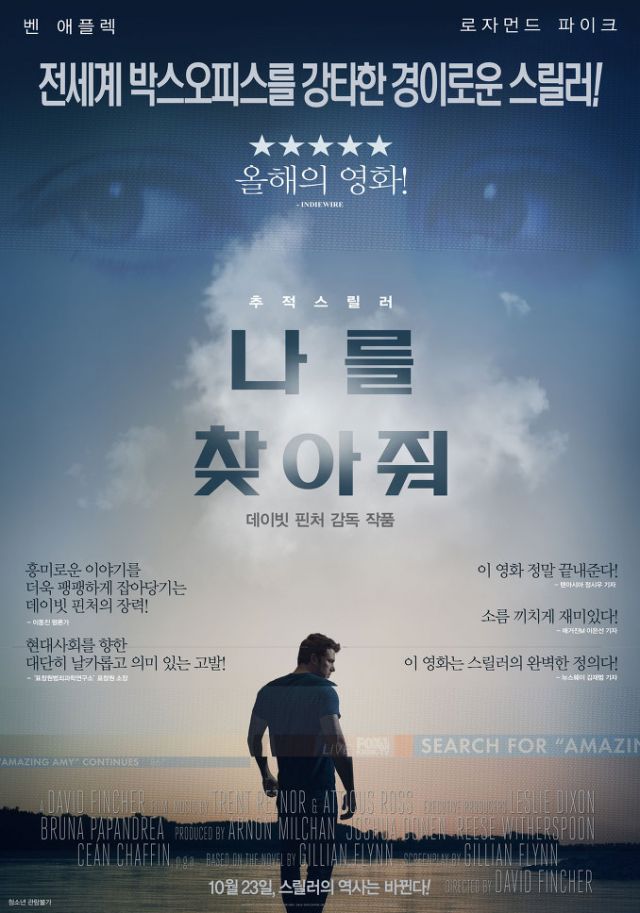 Last week's number one, David Fincher's "Gone Girl", retained the top spot during its second week out, only this weekend the victory was a little more convincing. Fincher's latest added another 452K admissions (34%) to bring its two-week total now to 1.2M ($9.1M). Its closest rival came again via Jang Jin's "We Are Brothers" (starring Cho Jin-woong and Kim Sung-kyun), which managed to register just over 243K (17%), but Jin's comedy drama still finds itself 200K short of that million milestone.

Lee Hae-joon's drama "My Dictator" was the only new local release to crack a top ten finish, and over its allotted 654 screens managed 207K (15%). It was a competitive haul that came close to sending "We Are Brothers" packing (which, surprisingly didn't happen despite the newbie enjoying 150 more screenings than Jang Jin's). In fourth place, and down just the one place, was "My Love, My Bride - 2014" (134K - 9.6%) by Lim Chang-sang; a romantic comedy released early October that has since amassed over 2M admissions ($15M).

The top five gobbled over 80% of the box office pie, which left films like "Dracula Untold" (56K - 4%) and "Boyhood" (43K - 3%) to scramble for recognition in the middle order. Both these features, to be fair, came close to challenging Chang-sang's favourite, as there was just 25K stubs that separated 4th from 6th. Richard Linklater's coming-of-age-drama "Boyhood" has grossed over ten times its $4M production costs, and the film continues to enjoy unanimous critical acclaim for its enduring depiction of a human subject in motion. This innovative experimental drama, however, has not resonated much with Korean filmgoers, and has managed just 126K ($907K) since entering the Korean fray late last month.

In eighth place came the British-American mystery thriller "Before I Go to Sleep", which stars Nicole Kidman, Mark Strong, and Colin Firth in Rowan Joffé's adaptation of S. J. Watson's 2011 novel of the same name. It claimed 26K (1.9%) over 197 screens and was tailed by last week's number six, "Whistle Blower" (previously known as "The Messenger"). Lee Choon-hyeong's true-life drama now moves onto 1.7M admissions ($12.5M) after four and a half weeks of steady interest. Lastly came "The Maze Runner" whose long run in Korea (the film came out back in mid-September) is now teetering to a close as occupied tenth with 18K, but has presently scored over $20M from local moviegoers.