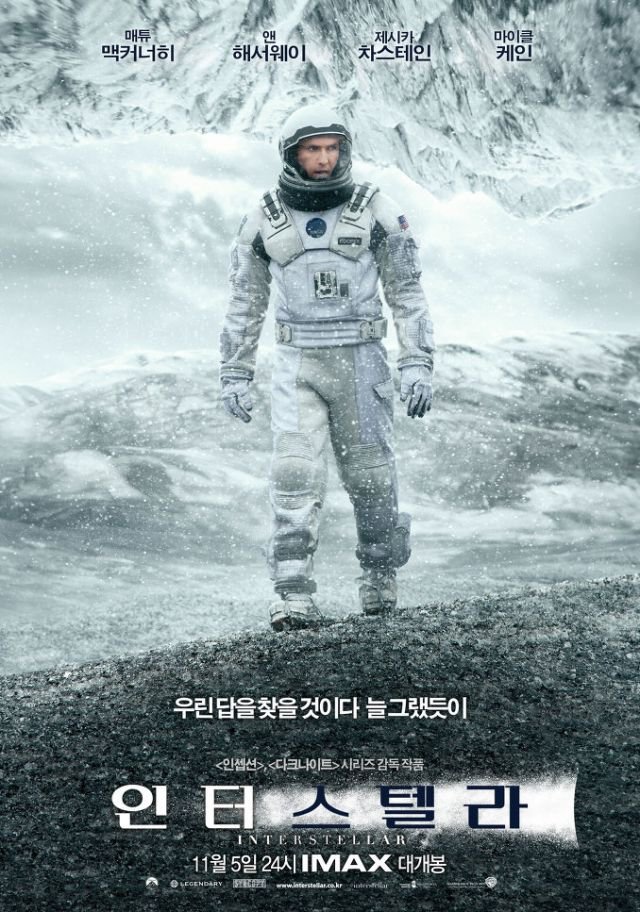 Week two for Nolan's spacey success saw the breakthrough blockbuster add another 1.7M admissions to its Korean cause. "Interstellar" recently crossed the $300M mark internationally, $36M of which coming from Korean screens as it becomes the seventh highest grossing film of the year behind "Transformers: Age of Extinction" ($38M). Unfortunately this galactic stub-guzzler had little competition, and so absorbed over 76% of ticket sales from a greedy 1,410 screenings (close to triple its nearest rival).

The only new Korean entry came in second. Boo Ji-young's "Cart" entered this arid arena on the 13th, and its opening weekend yielded 292K (11.6% over 544 screens). The film, Boo's fifth since "Sisters on the Road" in 2008, is a drama starring Yum Jung-ah, Moon Jung-hee, and Kim Young-ae and seeks to reveal the struggles of one non-contract employee as she battles her wrongful dismissal.

The critically acclaimed "Gone Girl" followed in fourth (58 - 2.5%), trailed by the highest new foreign entry "The Other Woman" (34K - 1.4%). Cameron Diaz, Leslie Mann, and Kate Upton are the three leading ladies in Nick Cassavetes' "The Other Woman", a romantic comedy that has already grossed $194M since its release back in April. The animated fantasy "The Boxtrolls" fell just the one place to sixth with its allotted 28K (1%), an American film that has failed to perform in Korea despite being $40M in the black worldwide.

The supernatural film "Wolves" by Canadian director David Hayter managed 19K and seventh position, while the new foreign drama "What If" open its account with 11K. Finally, this weekend's winners were rounded off by the nostalgic return of "Thomas & Friends: King of the Railway" (8K), as well as the epic innovation of "Boyhood" (6K).