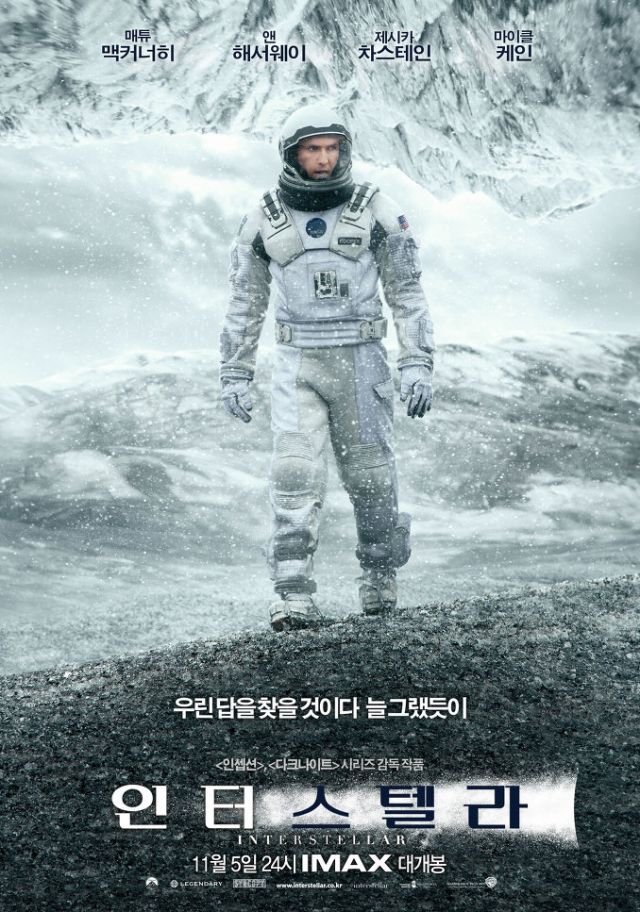 Christopher Nolan's sublime "Interstellar" once again held steady at the top as Nolan's cosmic cinemascope added another 1.2M admissions (54.6%) to its Korean cause. Since its released on the sixth, "Interstellar" has banked $49.2M, about a ninth of the film's worldwide bottom line (which is nearing $450M). Its recent performance in Korea saw it surpassed "The Attorney" and its allotted 5.6M ($37.6M); and in doing so, becomes Korea's fifth highest grossing film of year.

"Interstellar" stood unperturbed in pole position in week three, despite the appearance of two new favourable foreign films in the form of the "The Hunger Games: Mockingjay - Part 1" (the penultimate film in the "Hunger Games" 'trilogy'), and Brad Pitt's WWII drama "Fury". Young-adult dystopian fiction has gained tremendous popularity in recent years, and Lawrence's adaptation of Suzanne Collins' book series has become the martyr of that movement. The film opened its Korea account with 387K admissions (16%), but was narrowly outplayed by "Fury" and its 389K. This does come as somewhat of a surprised, especially given the the extra 100 screens that were provided to Lawrence's latest instalment.

Together these top three claimed over 87% of the total ticket sales, and leading the struggle for the remaining stubs was, last week's number two, "Cart". Boo Ji-young's drama entered the fray on the thirteenth where it scored 292K in the wake of "Interstellar". Week two, however, was less stellar, and from its allocated 409 screens the film managed a little over 115K (4.5%). "Cart" now moves onto 668K, but will find it hard going if it has any aspirations of sealing a seven-figure sum.

Kim Deok-soo's family comedy "Dad for Rent" (starring Kim Sang-kyung, Moon Jung-hee, and Chae Jung-an) featured in fifth for its first weekend out (84K - 3.2%), while the Chinese animation "Boonie Bears: To The Rescue" (which enjoyed the highest-grossing opening weekend for a Chinese animation when it premiered back in January) sat in sixth with 22K (0.8%). The critically acclaimed "Gone Girl", starring Batman-to-be Ben Affleck, moved its total tally onto 1.7M with the additional 16K (0.7%) it scored over the weekend. "Gone Girl" was released late in October and spent its first two week's (pre-"Interstellar") as Korea's film of choice, but has since struggled to compete.

Oh Ki-hwan's "Fashion King - Movie" has proved more faux pax than fabulous as week three saw it fall from third to eighth. The film's highest weekend haul came in week one, where it managed 284K (2nd), but interest quickly wavered and film's figures subsequently dropped to 93K (3rd), and now just 11.9K. That puts "Fashion King - Movie" well below par with its current total tally of 583K ($3.8M), and makes it a strong contender for further relegation in the near future. The quirky American animation "The Boxtrolls" followed in ninth (9.3K), and the best the box office had to offer was finished by Choi Ho's impatient (being officially scheduled for released this Thursday) action flick "Big Match" and its (8.3K).