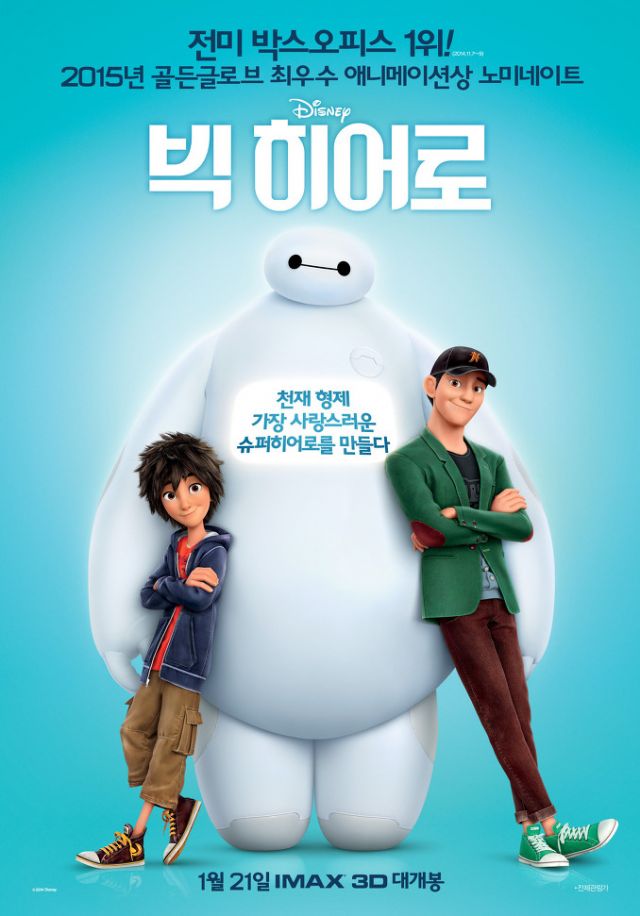 Last week Yoo Ha's "Gangnam Blues" entered the fray and scored a narrow victory during a highly competitive weekend. "Gangnam Blues", "Big Hero 6", and JK Youn's "Ode to My Father" were all in the running for gold, but its was Yoo's action noir that the public championed. This weekend, however, saw Walt Disney's "Big Hero 6" gain momentum and claim the week's top spot with over 611K admissions going its way (29%), bumping its total tally in Korea now to 1.7M ($12M). To date, Disney's, Marvel-inspired, Oscar nominee has already banked $484M worldwide, more than double its production budget of around $165M.

Following this animated foreign favourite came the local film of the year: "Ode to My Father". Week seven for Yoon's war drama (which stars Hwang Jung-min, Kim Yunjin, Oh Dal-soo, Jung Jin-young) saw it climb back up to second having been overtaken last week by both "Gangnum Blues" and "Big Hero 6". But Yoon's fifth feature has been a popular phenomena that refuses to fade just yet, and so scored an additional 420K (20%) over the week to push its total tally now to an awesome 12.7M ($89M). "Ode to My Father" is now the fifth highest-grossing Korean film of all time, have recently surpassed "Masquerade" (12.3M) and "The King and the Clown" (12.3M), and now has "Miracle in Cell No.7" (12.8M) clearly in its sights. Simply incredible stats, and it's not done yet.

As mentioned, it was a promising start for Yoo's "Blues", but the popularity of the above mentioned flicks forced it to third with its 403K (20%). The film also marked somewhat of a watershed mid-chart, as the next feature only managed 168K (7.8%). Mun Je-yong's first solo effort in the directors chair ("Shoot Me in the Heart") was released on the 28th, and from its 452 screens the film banked $1.1M. "Shoot Me in the Heart", which stars Lee Min-ki and Yeo Jin-goo as two friends who break out of a mental hospital, is based on the novel by award-winning Korean author Jeong Yoo-jeong-I's novel "Shoot My Heart".

Not too far behind this promising adaptation came the romantic comedy "Love Forecast" with Lee Seung-gi and Moon Chae-won. Last weekend the film occupied fourth with 281K, but slipped to fifth here with 116K (7.8%). "Love Forecast" was released on the 14th of last month and is now approaching two million tickets sold (1.8M - $12.9M).

To the lover half of the table now, and in sixth place (down one) came "Night at the Museum: Secret of the Tomb" with 81K (3.6%), followed by the new foreign release "The Water Diviner" by actor-director Russell Crowe (61K - 2.8%). The American action thriller "The Equalizer" (starring Denzel Washington, Marton Csokas, Chloë Grace Moretz, David Harbour, Bill Pullman and Melissa Leo) and Tim Burton's biographical romantic drama "Big Eyes" came in eighth (37K - 1.8%) and ninth (36K - 1.7%) respectively. And lastly, the weekend was rounded out by Ha Jung-woo's drama "Chronicle of a Blood Merchant" with 32K (1.5%), down four places from last weekend and now finds itself just 60K short of a million admissions.