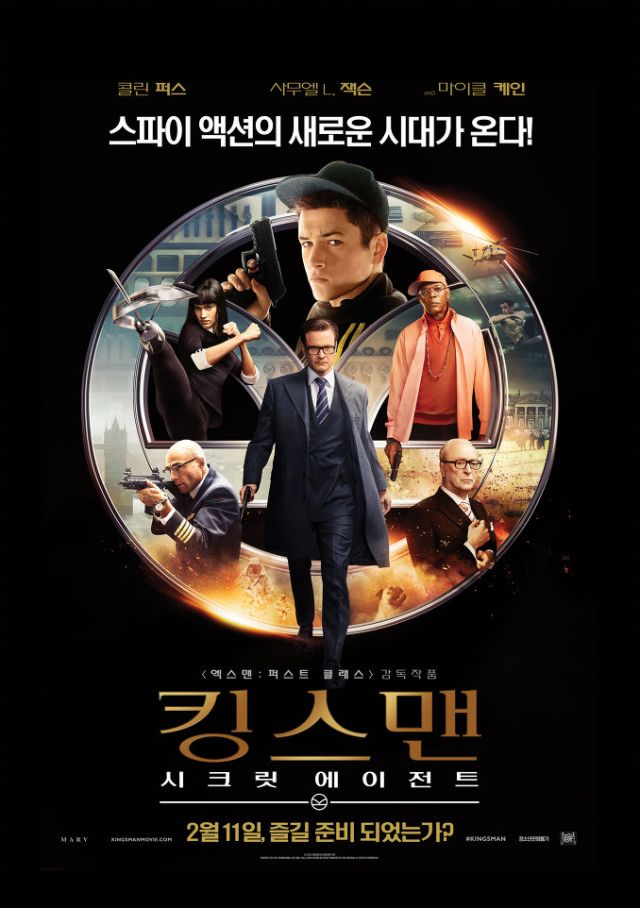 The British spy comedy "Kingsman: The Secret Service" fought back after losing out to "Detective K: Secret of the Lost Island" last weekend. "Kingsman" captured 32% of the box office pie to comfortably top the chart, banking $4.6M (597K admissions) and moving its total in Korea now to 3.3 million.

Matthew Vaughn's adaptation as not the only U.K. flick to feature. Morten Tyldum's "The Imitiation Game" (which stars Benedict Cumberbatch as the famous WWII cryptanalyst, Alan Turing) climbed two spots to second with 312K stubs scored (16%), but was closely tailed by the highest local listing in Kim Seok-yoon's "Detective K: Secret of the Lost Island".

Back in 2011 the original "Detective K" hit theatres and attracted 4.7M filmgoers over three months to become one of the most popular films of the year. Now, in 2015, Kim's returned with another Joseon adventure that has pleased Joseon junkies. "Detective K: Secret of the Lost Island" was released on the 11th of last month, and during that time has amassed $26.3M (3.6M admissions - 13%) and stands as one of only two Korea representatives in this weekend's top ten.

In fourth place came the BDSM phenomena "Fifty Shades of Grey" by Sam Taylor-Johnston, who adapted this sexy story from E. L. James' bestselling novel of the same name. Worldwide the film is on the brink of reaching $500M, and during its first weekend out in Korea the film managed to coerce 8.5% of the filmgoing public to its cause (161K). Not too far behind fell David Aponte's action drama "Back to the Beginning" that follows an ex-con trying to turn his life. David's flick managed 139K over 247 screens to take sixth, almost double the stub count of its nearest challenger.

Capturing 3.8% of the pie with 72K admissions came the Japanese sci-fi horror "Parasyte: Part 1" by Takashi Yamazaki (with the original story by Hitoshi Iwaaki). The film straddles between black comedy and serious sci-fi, but so far Korean cinephiles have been lukewarm about this manga from across the sea. Glenn Ficarra and John Requa's dark comedy "Focus"(starring Will Smith and Margot Robbie) occupied seventh place with 53K (2.6%). "Focus" is still in the red worldwide (the film was made for around $50M, but has so far only recouped $31.3M), and only recently made its way to Korean cinemas to enter the fray.

The runaway favourite of the year, JK Youn's "Ode to My Father", had a boast last week thanks to the Lunar New Year crowds, but normality returned here as Yoon's hit war drama fell five places to settle at eight with 50K (2.4%). "Ode" was released back in December, and has consistently garnered massive support to bring its total tally now to a record-breaking 14.2M admissions. Currently, "Ode" has made over $100M and stands as the country's second highest grossing film of all time, behind "The Admiral: Roaring Currents" (2014).

"The SpongeBob Movie: Sponge Out of Water", down three places, and "Stand by Me Doraemon", which made a top ten comeback, closed out the week claiming 49K (2.3%) and 49K (2.2%) respectively.