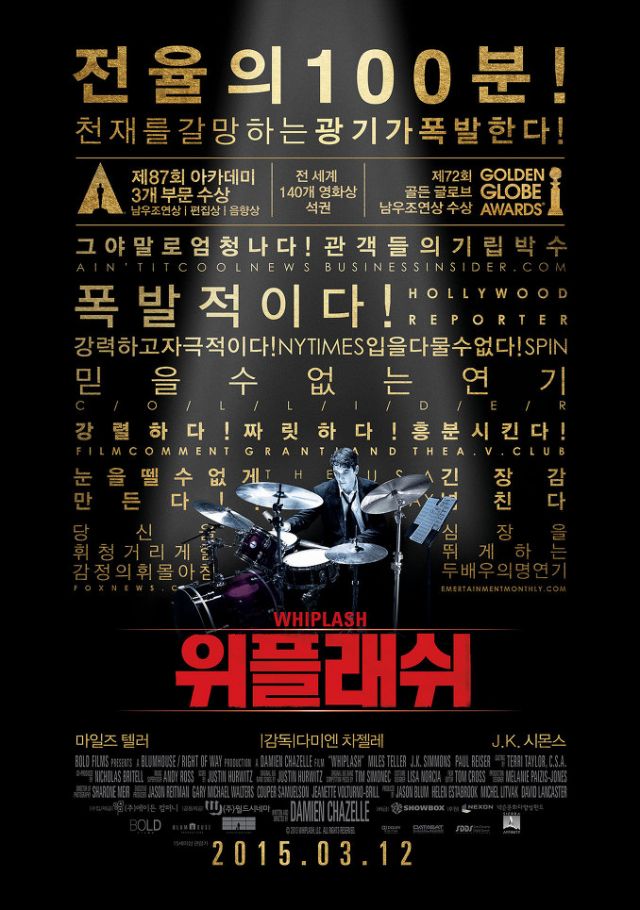 Damien Chazelle's "Whiplash" rose to the top of the pile over the weekend having entered the fray last weekend in fourth. The film, which is based on Damien's experiences in the Princeton High School Studio Band, claimed 374K (24%) over 574 screens to top the chart, brining its total tally in Korea now to 825K, or $5.9M.

Not far behind fell the British spy flick "Kingsman: The Secret Service". Matthew Vaughn's latest has performed well in Korea having attracted over 5.3M filmgoers since its release mid-February, 317K (21%) coming from this past weekend. Worldwide the spy comedy has to date grossed $295M.

In third place, and new to the chart, came the American romantic fantasy Cinderella by Kenneth Branagh. The film is based on the Disney fairytale of Cinderella, but the script itself is by Charles Perrault, and 311K (19%) Korean filmgoer welcomed the remake to their shores. The film received 530 screens from which to pool from, and garnered enough attention to outplay another foreign release: "Run All Night".

Jaume Collet-Serra's "Run All Night" (starring Liam Neeson, Joel Kinnaman, Common, and Ed Harris) was released last Thursday to 410 screens around the country and attracted 151K (9.6%) to its cause. Close on its heels fell last week's number one "The Deal" by Son Yong-ho. Last week "The Deal" entered into the chart, where it occupied the top spot with 409K admissions going its way. Week two for Son's crime drama was, however, less successful as it managed just 139K (9%) over this past weekend which bumped it to fifth. Since its release on the 12th "The Deal" has amassed 780K ($5.7M).

In sixth was the South African sci-fi effort "Chappie". Neill BlomKamp's third feature was able to reach third place last weekend, but, like "The Deal", "Chappie" found itself heading towards the wrong end of the chart. "Chappie" claimed 94K (5.8%) over 365 screens which moves its total tally now to 544K ($3.9M). Hong Seok-jae's mystery "Socialphobia" slip two places to seventh, attracting 41K filmgoers to its cause as it crept to 232K tickets sold.

"Granny's Got Talent" has been around since the 5th of March, and the penultimate weekend of the month saw this local family drama bump its bottom line to $3.5M (493K - 2.2%). The Japanese anime "When Marnie Was There" by Hiromasa Yonebayashi was the only other new release to crack a top ten finish (claiming 22.7K, 1.2%, over 242 for ninth place), and has thus far banked $157K. Lastly, Morten Tyldum adaptation of Andrew Hodges's "Alan Turing: The Enigma" teetered in tenth with 18K in its favour. Tyldum's film was released mid-February in Korea and has since accumulated 1.7M admissions ($12.1M).