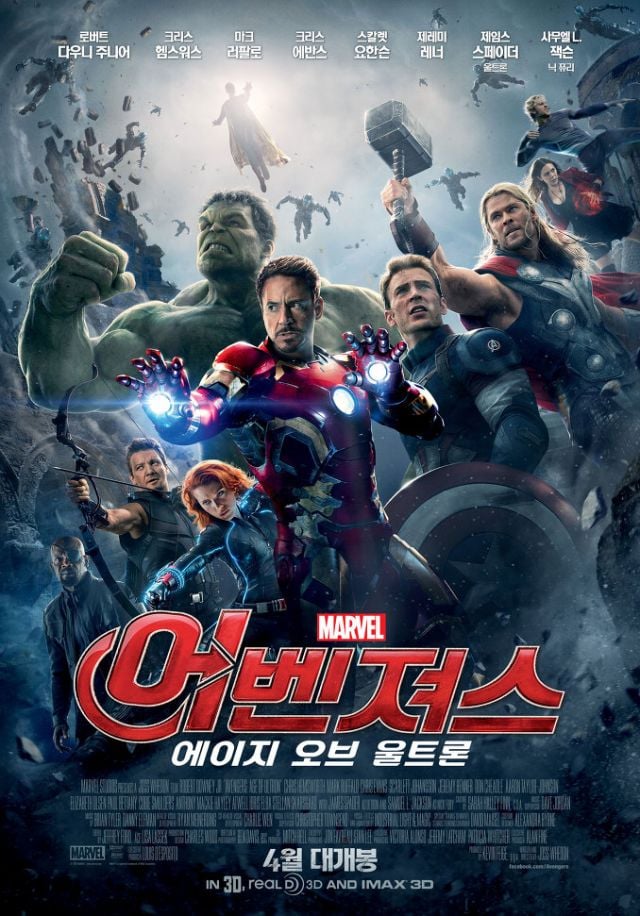 Marvel's massively successful "Avengers: Age of Ultron" continued its reign at the top of the pile over this past weekend. The $280 billion film added an additional 804 admissions (52%) to its cause, bringing its total tally in South Korea now to 9.3 million admissions (or $73 million). Currently, "The Avengers: Age of Ultron" has grossed over $875 million worldwide.

Han Hun-hee's drama "Coin Locker Girl" (aka "China Town') was unmoved in second and secured its place by attracting 272 thousand to its screens (18%), which was enough pushed it past the million admissions mark. This is the second weekend out for "Coin Locker Girl", and so far the film (which stars Kim Hye-soo, Kim Go-eun, and Um Tae-goo) has banked just over $9 million.

The American supernatural horror film "Unfriended" arrived last Thursday, and from its 386 screens secured 7% of the box office pie (123 thousand admissions) to take third place. The film is directed by Levan Gabriadze and premiered last year in July at the Fantasia Festival. Not far bend Levan's dark delight fell Kim Aaron's romantic comedy "Love Clinic" starring Oh Ji-ho and Kang Ye-won. Like "Unfriended", "Love Clinic" was released last week and managed to attract 123 thousand to its cause over the weekend (6.7%).

Kim Jin-young's "Enemies In-Law" occupied third place last weekend but, with above new entries making their play, was bumped down to fifth with 74K going its way (4.3%). The Korea-USA animated co-production "Dino Time" took sixth place with 40 thousand admissions (2.3%, and down two spots), while the Japanese horror "Parasyte Part 2" (based on Hitoshi Iwaaki's manga series) took seventh place with 33 thousand (2%).

Kang Je-gyu's family drama "Salut D'Amour" has been active the charts since early April, and since then has claimed 1.1 million admissions ($7.8 million), 27 thousand of which came from this past weekend. The European animation "Ooops! Noah is Gone..." (Aka "Two by Two") tumbled from fifth to ninth without much fuss. This Noah-inspired animation claimed just 23.8 thousand to move its total tally in Korea to 205 thousand ($1.3 million). Lastly, the list of the weekend's top films was rounded out by the Taiwanese drama Secret starring Jay Chou and Gwei Lun-mei. Jay Chou's Secret is a re-release from 2007, but South Korean cinephiles welcomed back this award-winning film warmly as over 21 thousand (1.3%) came out to re-live its magic moments.