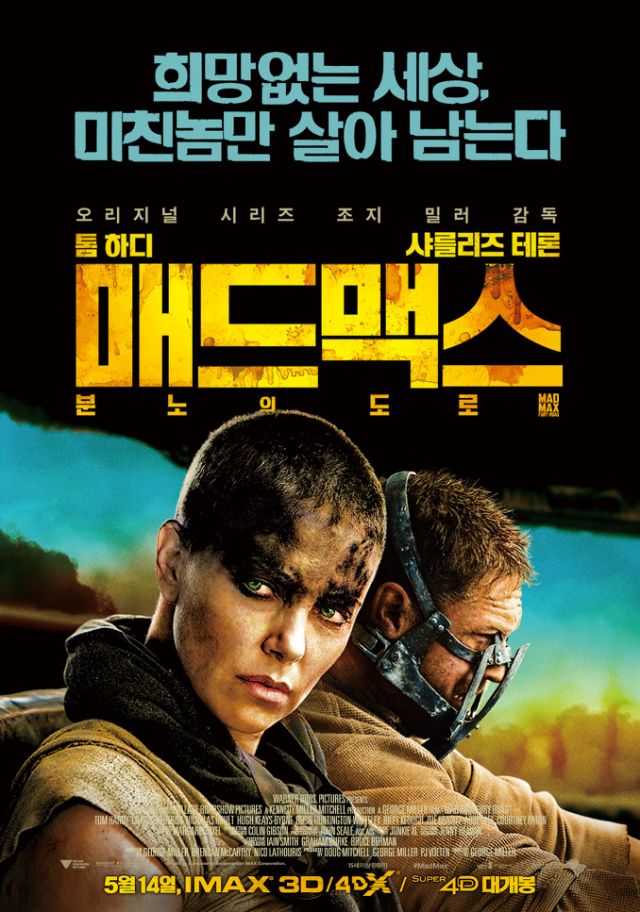 The fourth film in the "Mad Max" series continued its reign atop the Korean box office, claiming additional 310K (31%) across 714 screens to move its total tally now to 1.8M ($15M). "Mad Max: Fury Road" has been peppered with praise from critics and filmgoers worldwide, and is quickly closing in on the estimated $150M it took to produce. Last weekend "Mad Max" (along with Spy) entered and dislodged Marvel's "Avengers" as the country's favourite flick; week two for George Miller's dusty dystopia saw that success continue as fans flocked to theatres to catch Tom Hardy and Charlize Theron in action.

Pal Feig's Spy remained in second place having captured 23% of the box office pie. Spy claimed 257K admissions across 663 screens to retained its prized place on the podium. Baek Woon-hak's "Chronicles of Evil" (starring Son Hyeong-joo, Ma Dong-seok, and Choi Daniel) was one of the only films that saw any movement (in the right direction) as it climbed one place to settle in third. Baek's thriller scored the attention of 415K last weekend but saw that figure drop to 153K (17%) here. Currently, "Chronicle of Evil" has amassed 1.4M stubs, or $10.3M.

From fifth place down the figures took a turn to the tranquil, with Marvel's "Avengers: Age of Ultron" marking the watershed with just 65K (7%) to its name. "Avengers" hit Korean shores at the end of April and has since amassed 10.2M admissions, or $79.3M; worldwide, the film has grossed over $1,2B. The American 3D flick "Home" was the only new entry to make it onto the top ten, pocketing 61K admissions over 514 screens for sixth. The film (which is based on Adam Rex's 2007 book "The True Meaning of Smekday") is already in the black in terms of its earnings worldwide having banked $344M (the film was made for $135M by DreamWorks Animation).

Han Jun-hee's "Coin Locker Girl" (starring Kim Hye-soo, Kim Go-eun, and Um Tae-goo) added just 2.8K (0.3%) to it cause (which now stands at $11M), and was closely followed by the American comedy drama "While We're Young" and its 2.3K. Lastly, the list of the weekend's top performers was rounded out by Richard Glatzer and Wash Westmoreland's adaptation "Still Alice" starring Julianne Moore (1.6K), and the South Korean animated adventure "Dino Time" by Choi Yoon-seok-I and John Kafka (1.5K).