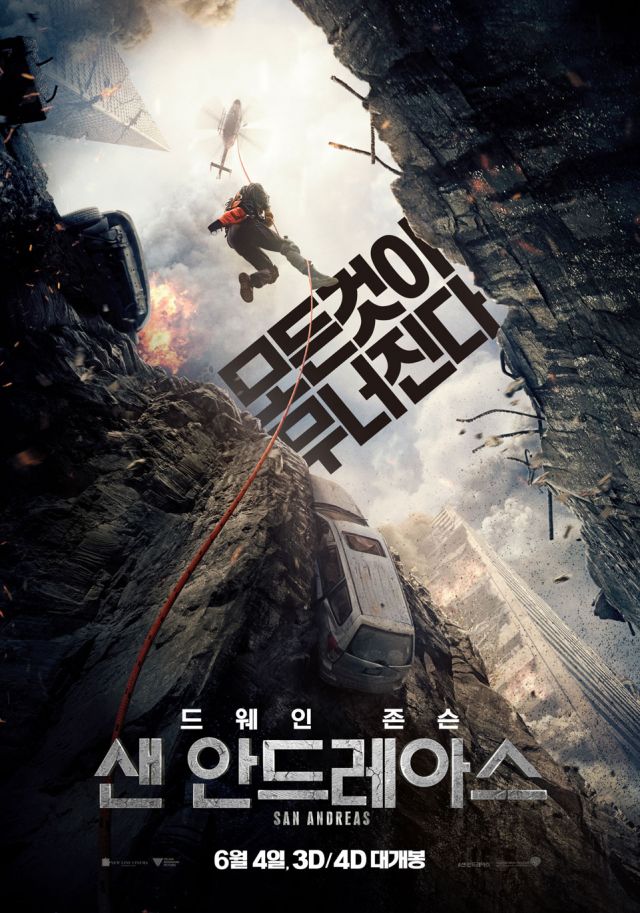 Brad Peyton's epic disaster film "San Andreas" hit South Korea last Wednesday and now sits atop the box office. The $110M film attracted 724K admissions over 847 screens to end the first weekend of June comfortably on top with 48.3% of the box office pie going its way. Despite receiving mixed reviews from critics, the film has attracted fans locally and internationally and has already banked over $150M worldwide.

Meanwhile, the critically acclaimed post-apocalyptic action film "Mad Max: Fury Road" slipped down a place to second (Andreas' fault), adding 276K (18%) to its total tally which now stands at 3.4M, or $26.4M. "Fury Road" has been praised by critics and filmgoers alike, citing the film's stunning visual effects, top talent, and progressive portrayal of women as some its charms. Since its released halfway through May, "Fury Road" has managed to double its production cost by raising $308M around the world, and it a strong contender for next year's Academy awards.

The action comedy Spy (starring Melissa McCarthy, Jason Statham, Rose Byrne and Miranda Hart) was released in Korea in the third week of May, and since then it's managed to retain its podium position. During that time, however, the film has only managed to attract 1.9M filmgoers to its cause, 249K of which came from this past weekend. Spy made this weekend a clean sweep for the visitors at the top of the pile, and sadly the film also marks somewhat of a watershed in the chart as those that followed claimed less than 5% each.

Yoon Jae-goo's thriller "Perfect Proposal" was another new release, but although the film featured highly in this weekend's top performers, it did so with only 71K (4.3%). The film stars Lim Soo-jung and Yoo Yeon-seok as a young woman is dangerous tempted by a man who offers to change her life forever. Yoon's intimate thriller was followed Min Gyoo-dong' period drama "The Treacherous" with 54K (3.4%), which is a place higher than what it earned last week. That rise came at the expense of "The Chronicles of Evil" (49K) and "The Shameless" (35K), both of whom stumbled and fell towards the wrong end of the chart and took sixth and seventh respectively.

In eighth place entered the Japanese survival horror film "Fatal Frame" (aka "Gekijōban Rei ~Zero~") with 21K admissions, followed by DreamWork's animated buddy comedy, "Home". Tim Johnston's "Home" is based on Adama Rex's "The True Meaning of Smekday", a popular children's book from 2007 that DreamWork's jumped on. Lastly, this weekend's list of top performers was rounded out by Brad Bird's science-fiction film "Tomorrowland" starring George Clooney and Hugh Laurie. "Tomorrowland" open in Korea late last month, entered in fifth place, but has since slid towards the wrong end of the chart and is now in danger of being evicted. The film added just 14K to its total tally, which now sits at 259K ($1.8M).