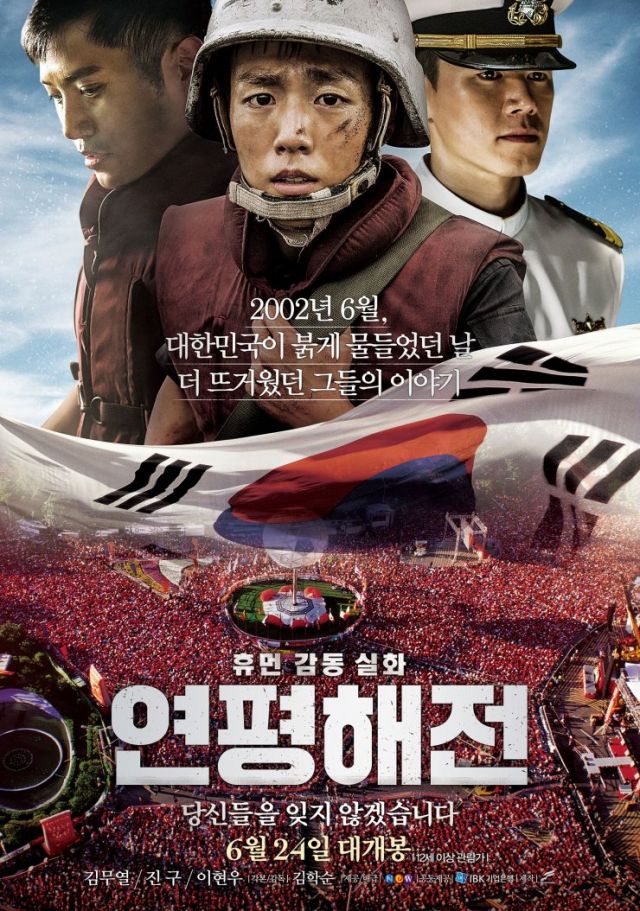 Kim Hak-soon's war drama "Northern Limit Line" returned to the top of the pile this past weekend after having been dislodged last week by the hard-hitting "Terminator Genisys". Kim's war drama did this by capturing 26% of the box office pie (872 thousand admissions), and so moved its total tally onto 4.6 million ($31 million). Last week's number one, the fifth in the "Terminator" series, fell two places to settle in third with 647 thousand (21%), while second place went to the critically acclaimed new Disney and Pixar feature: "Inside Out" by Pete Docter.

Made for around $175 million, "Inside Out" has already managed to gross over $435 million worldwide, and its first weekend in Korea mirrored that excitement. Docter's efforts were welcomed by 21% of the filmgoing public which amounted to the sale of 679 thousand admissions during its first weekend out. Following that successful release for second fell Kim Kwang-tae's fantasy thriller "The Piper" starring Ryu Seung-ryong, Lee Sung-min, Chun Woo-hee and Lee Joon. Kim's flick had 634 screens from which to pool, and from it managed to attract 14% of the total tickets sold (437 thousand admissions). This was one of the closest top ten's we've seen in recent months, and together the top four features captured 82% of the tickets sold.

In fifth place, and down two, came the nostalgic and titanic "Jurassic World". It brought in another 233 thousand admissions (7%) which moves its total admissions count in Korea now to 5.3 million ($49 million). Worldwide, Colin Trevorrow's action flick has banked over $1.4 billion; incredible, record-breaking figures. The third instalment in the "Insidious" series of films was released last Thursday, and during its first weekend it claimed sixth with 198 thousand admissions (6%) from 410 screens. Behind Leigh Whannell's horror, and falling three places, came Kwak Gyeong-taek's drama "The Classified File" starring Kim Yun-seok and Yoo Hae-jin. "The Classified File" was released mid-June, and with the 63 thousand admissions (2%) it claimed over the weekend, the film's bottom line now sits at 2.8 million, or $19.5 million.

Moving to the final three now and in eighth place entered "Woman in Gold": a British-American drama by Simon Curtis starring Helen Mirren and Ryan Reynolds. The film was given 247 screens, and from those it attracted 34.7 thousand to its cause for its first weekend showing. Another new foreign entry followed this time in the form of the American musical drama "Rudderless" by director William H. Macy. It managed to captured just over half a percent of the total ticket sales (18,9 thousand admissions) and was followed in tenth by Kim Seong-je's "Minority Opinion" (which stars Yoon Kye-sang, Yoo Hae-jin, Kim Ok-vin, Lee Kyung-young, and Kim Eui-sung). "Minority Opinion" closed the weekend's top performers with 7.8 thousand admissions (0.2%), and so moved its total tally now to just 372 thousand ($52 thousand).