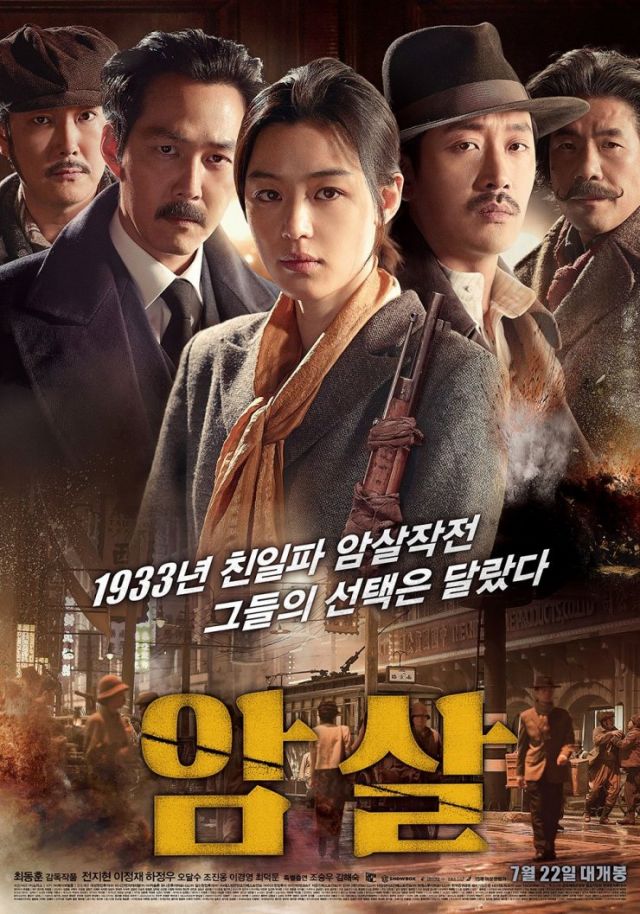 "The Assassination" dominates and threatens records...

Not since "The Admiral: Roaring Currents" (South Korea's highest-grossing film) have Korea's moviegoers rallied so vehemently behind a moving picture. Choi Dong-hoon's drama "The Assassination" was officially released last Wednesday and was the film to see over the weekend. And see they did.

Choi's thriller captured 66% of the box office pie, which equates to 2.4 million admissions, or $16 million just over the weekend. The film also enjoyed the second-most views in a single day on Saturday (950 thousand), and has once again put a local delight firmly at the top of the pile (something Korean features have not seen too much of this year). "The Assassination" is set in the early half of the last century when Korea was still under Japanese rule and follows a top-notch sniper who's tasks with taking down a Japanese commander. The film stars Jun Ji-hyun, Lee Jung-jae, Ha Jung-woo, Oh Dal-soo, Cho Jin-woong and has thus far managed to really wow local audiences this summer.

The massive success of Choi's efforts meant that the rest of the picture pack struggle to amassed any significant stubs. The critically acclaimed "Inside Out" claimed the top spot last weekend, but was relegated here in light "The Assassination", and managed to add another 696 thousand admissions to bring its total tally now to 3.1 ($21.4 million). Together the top two flicks captured just over 84% of the total sales.

In third place came the Japanese animation "Yokai Watch: Tanjo no himitsuda nyan" (which is based on the popular series of Nintendo video games by Noriyuki Konishsi), the first of two Japanese animations to feature this week, and claimed 217 thousand admissions (5%) from a possible 510 screenings around the country. Kim Hak-soon's war drama "Northern Limit Line" fell two places to fourth with 149 thousand (4%), and so moves it's bottom line to $38 million since its release back in June.

Despite the critic's lambasting of Chris Columbus' "Pixels", 67 thousand of Korea's most curious came out to catch Adam Sandler and Co. in this questionable romp with magical realism. Rolling Stone's Peter Travis said that it is "a 3D metaphor for Hollywood's digital assault on our eyes and brains". The film was made for $88 million and has so far recouped just over half of that investment.

The third chapter in the "Insidious" series of films featured in sixth place with 54 thousand (1.4%) and was closely tailed by "Terminator Genisys" with 44 thousand admissions. The latest "Terminator" arrived in Korea on the second of this month (where it then top the chart), and has since given way to the summer's hit list, but still the foreign flick has been generally well-received as it moves it total tally now to 3.2 million ($22.5 million).

Closing out this week's top performers now, and in eight place we find another Japanese animation, this time in the form of Kunihiko Yuyama's "Pokemon Ranger to Umi no Ouji Manaphy" that captured the interest of just over 20 thousand filmgoers. "Jurassic World" tumbled from sixth to ninth, and with the additional 17 thousand it claim here the film's total bank in Korea stands at over $40 million (5.5 million admissions). The last weekend in July was closed out by Simon Curtis' drama "Woman in Gold" starring Helen Mirren as she tells the tale of the late Maria Altmann. The film was released on the 9th (where in entered in eighth) and for the past week's it's hung onto tenth place.