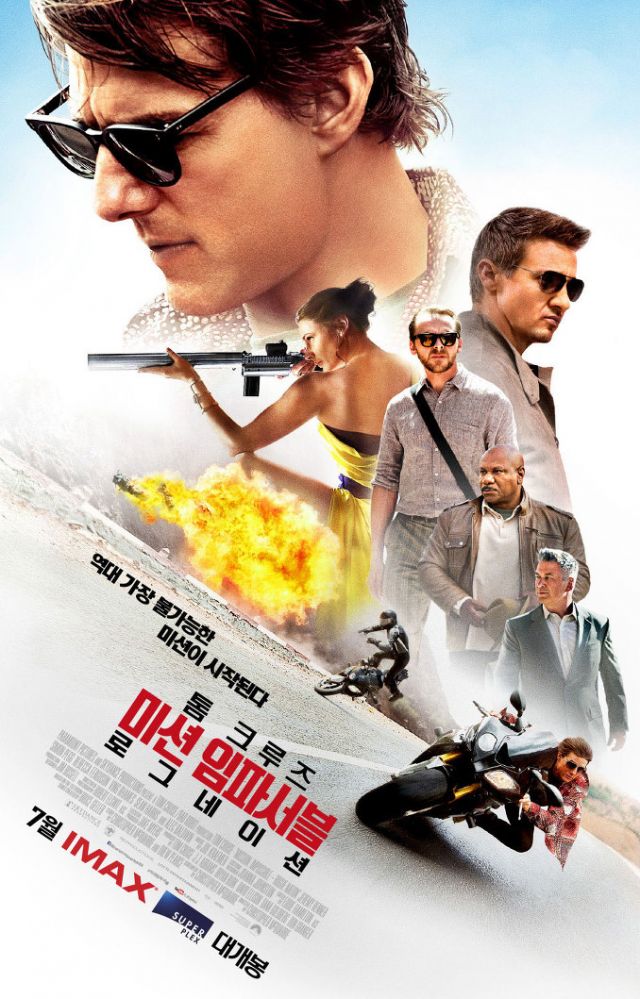 Cruise disrupts "The Assassination" on entry…

After a recording-breaking performance by a local hit last week, Tom Cruise qua Ethan Hunt has come in and immediately upped the ante and put pressure on a home hero. Last weekend Choi Dong-hoon's "The Assassination" attracted over 2.4 million admissions ($16 million) during its opening weekend out; it was a stunning start that finally put a Korean film firmly back on top. Choi's high-stakes drama may have conceded the lead, but in just over a week it's managed moved its total tally to 6.5 million admissions (that's $43.8 million since July, 22), 1.5 million of which came from this past weekend.

It would, of course, be Tom Cruise to unsettle the Korean box office with another installment of the popular "Missions Impossible" series of films. Cruise is a favourite here in Korea, and with that base Christopher McQuarrie's film managed to outplay the established front-runner for first place. "Mission Impossible: Rogue Nation" opened last Thursday and was given 1,202 screens around the country, from which nearly 2 million tickets were sold ($13.8 million). Together "Rogue Nation" and "The Assassination" guzzled 77% of the box office pie.

In third place came the spinoff "Minions" by Pierre Coffin and Kyle Balda. It managed a healthy 647 thousand admissions (13.2%) from just under 800 screens, and was followed in four by another animation, this time the cognitively complex "Inside Out" by Pete Docter. "Inside Out" has been heralded by critics as an important part of Pixar's return to righteous, and has so far made over $602 million worldwide. In Korea, "Inside Out" entered in second last week with 696 thousand admissions (18.3%) going its way, and week two was close to half that at 331 thousand (6.8%) for a total of 4 million ($26.8 million).

The Japanese animation "Youkai Watch: Tanjou no Himitsu da Nyan!" fell two places to settle in fifth with a little over of a percent (61 thousand admissions), and South Korea's "Tasty 2: Happy Together" (by Choi Kyeong-seok and Nonaka Kazumi) claimed 18 thousand for sixth to make the bulk of this weekend's middle order an animated affair.

Breaking that string, though, and down three places, was Kim Hak-soon's war drama "Northern Limit Line" which added another 13 thousand to bring its bottom line now to 6 million ($38.9 million). Bill Pohland's "Love & Mercy", Simon Curtis' "Woman in Gold", and the American musical "Rudderless" all came in under 2% to make up the rest of the pack in what was a significantly top-heavy top ten.