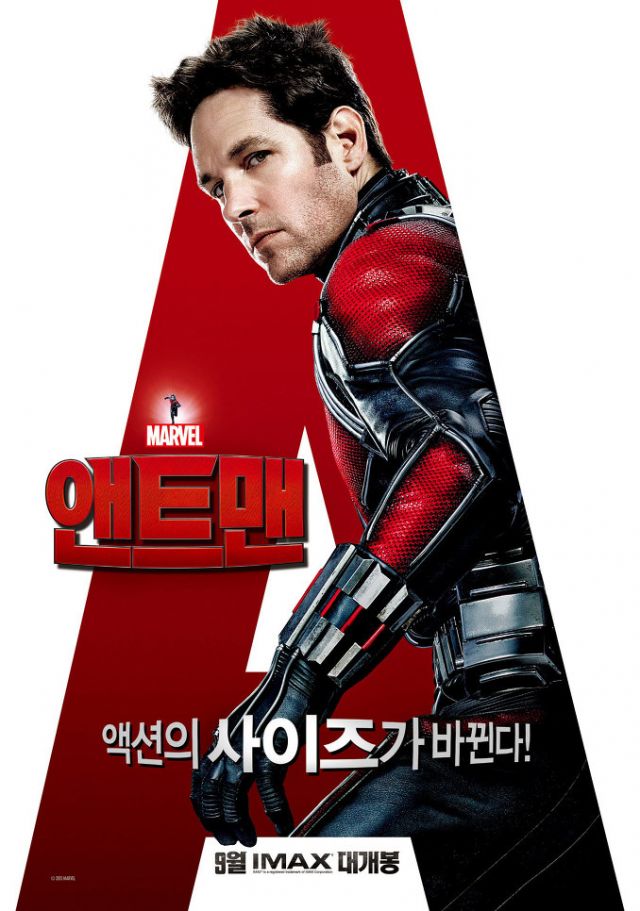 After weeks of local delights dominating, Marvel's latest superhero film, "Ant Man" by Peyton Reed, has managed to outperform the home team's frontrunners to top the chart. "Ant Man" was allocated 946 screens around the country, and from that pool it was able to attract an impressive 1.1 million filmgoers to its cause (45.7%). Peyton's effort made its debut in Los Angeles back in June, and has already grossed over $383 million, but only arrived in Korea last Thursday.

Last week's number one, Ryoo Seung-wan's "Veteran", has enjoyed a stellar run at the top of the pile over the last month, but with already 11.8 million admissions in the bag ($11.8 million), this local crime drama looks to have peak and has finally surrendered pole position. "Veteran" claimed just under 600 thousand admissions across 667 screens (23%), and along with "Ant Man", the top two flicks were able to capture 68% of the box office pie.

In third place entered another competitive local film: Hong Won-chan's "The Office" starring Go Ah-sung and Park Sung-woong. This mystery thriller claimed 207 thousand admissions (7.8%) from 424 screens to take third place during its first weekend out, only narrowing edging out Bak Jong-yeol's "Beauty Inside" which attracted 201 thousand (7.8%). Thus far "Beauty Inside" has amassed over $11.6 million since its release on the 20th (1.7 million tickets).

In fifth place fell the blockbuster "The Assassination" by Choi Dong-hoon. Last weekend, the "The Assassination" was seated in third but was forced to surrender two places here as it attracted just 152 thousand (5.7%). However, Choi's film is one of only eleven Korean films that have ever been able to claim more than 10 million admissions, and with this past weekend's tally included, the controversial film can now boast an impressive 12.4 million tickets sold; currently, that's $80 million.

The lower half of this week's top performers was largely made up of foreign favourites, and in sixth place entered the American supernatural horror, "The Gallows" by Travis Cluff and Chris Lofing. The film has received very poor reviews from critics and it's struggling to even dream of getting into the black; "The Gallows" was made for an estimated $100 million, but since its premiere late June, the film has only managed to earn $38.1 million; 53.9 thousand tickets were sold in Korea over the weekend (2%) from 298 screens ($425 thousand), which was good enough for sixth place.

"Hitman: Agent 47" followed with 34 thousand of its own (1.3%), and Kang Hyo-jin's comedy drama "Wonderful Nightmare" fell three places to settle in eighth with 34 thousand (1.2%). Lastly, the first weekend of September was rounded out by the billion dollar spinoff "Minions" (22.6 thousand) and, finally, the Japanese animation "Love Live! The School Idol Movie" closed out the top ten with 19 thousand admissions (0.6%).