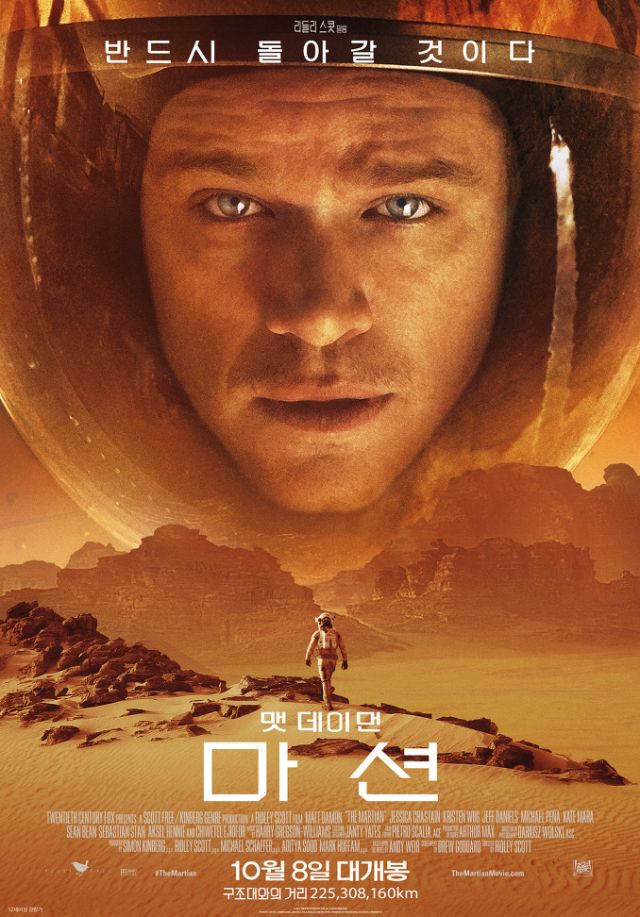 Ridley Scott's sci-fi epic, "The Martian", managed to remain at the top of the box office pile without much fuss or competition. "The Martian", based on Andy Weir's 2011 novel, and adapted by Drew Goddard, saw 819 thousand filmgoers come out and support its cause across 1,040 screens around the country, which meant that this popular space thriller captured over 46% of the box office pie during its second week out in Korea.

The interest the film received over this past weekend pushes "The Martian"'s bottom line now to 3.1 million ($22.7 million) since its released in Korea a week and a half ago. Worldwide, "The Martian" has been well-received by critics and moviegoers and has grossed $319.2 million. Second and third place were a little more competitive as Nancy Meyer's comedy "The Intern" and Heo Jong-ho's "The Advocate : A missing body" tussled it out with 317 thousand (17.2%) and 222 thousand admissions (11.9%) respectively; "The Intern" was released late September and currently has 2.7 million admissions to its name, while Heo's action drama (which opened alongside "The Martian" on the 8th) is now just 48 thousand admissions short of a million admissions.

Fourth place went to a new foreign release by Camille Delamarre, "The Transporter Refueled": the fourth instalment in the "Transporter" series of films, and the first not to star Jason Statham. The "Transporter" was allocated 432 screens from which to pool, and from them managed to attracted the interest of 93.7 thousand filmgoers, and so captured just over 5% of the box office pie during its first weekend out. Not far behind in fifth place fell Kim Jeong-hoon-II's comedy crime thriller "Accidental Detective" starring kwon Sang-woo and Sung Dong-il. It only had 335 screens to make the most of, and from them Kim's film claimed 88 thousand admissions, 4.6% of the weekend's box office activitely.

Period dramas have been wildly successful in recent years, and hoping to ride that wave of attention has been Lee Joon-ik's "The Throne". This Joseon-era drama has been active in the charts since its released mid-September, during which Lee's latest has been able to bank over $43.1 million, or 6.1 million admissions, $581 thousand of which (83 thousand admissions) came from this past weekend. In addition to the latest "Transporter" film, there were three other new releases that made it into the top ten: "The Visit" by M. Night Shyamalan, Lee Dong-ha-II and Park Eun-kyeong's "Circle of Atonement", and the epic romance fantasy, "The Age of Adaline" by Lee Toland.

M. Night Shyamalan has been on the receiving end of some harsh criticism over his filmmaking career, but he's back with another eery flick (a "found footage" comedy drama) that was made for just $5 million. "The Visit" opened its Korean account with 30.8 thousand admissions (1.6%), and worldwide M. Night Shyalaman's fourteenth film has grossed over $87.3 million. "Circle of Atonement" was next and stars Sung Dong-il, Son Ho-jun and Kim Yoo-jung in a suspense drama that follows a man and his daughter as they come face-to-face with a 10-year-old secret. "Circle of Atonement" was given 302 screens and managed to attract 28.2 thousand (1.4%).

"The Age of Adaline", which has been nominated in three categories in the 2015 Teen Choice Awards, opening weekend yielded 19 thousand admissions across 239 screens (1%) and, lastly, the list of the weekend's top performer's was rounded out by the American fantasy adventure "Pan" by Joe Wright whose 15.9 thousand (0.8%) bring its new bottom line now to 180 thousand admissions ($1.2 million).