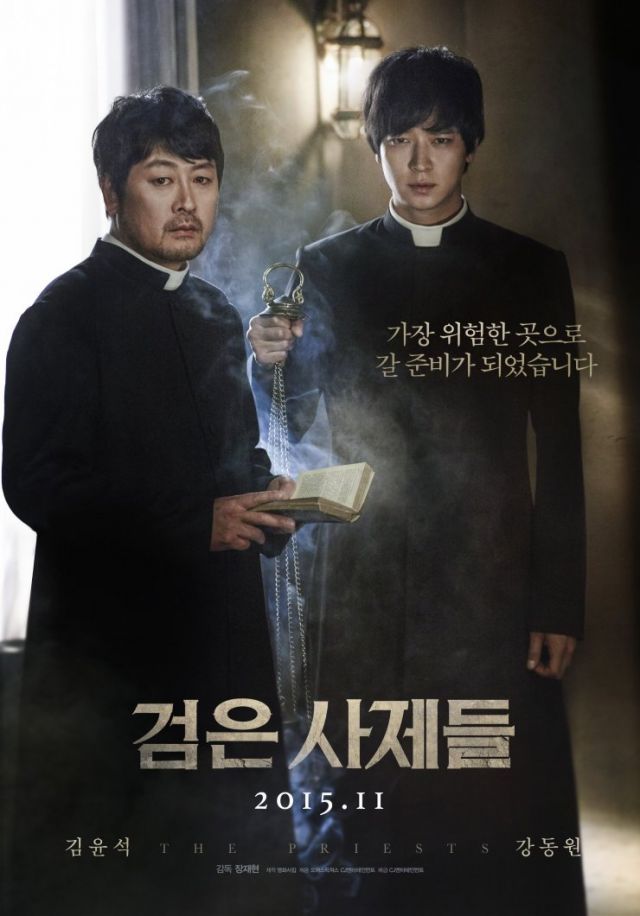 Jang Jae-hyeon's "The Priests" clean up at the top...

Jang Jae-hyeon's debut feature film "The Priest" entered at the top of the pile by capturing a domineering 62% of the box office pie over the weekend. The local film made its debut last Thursday, and from the 1,088 screens it was allocated managed to attract over 1.4 million filmgoers. Formerly known as "Black Priests", the film has been lightly compared to the iconic "Exorcist" film, and, more locally, the film conjures up images of Park Chan-wook's bloodly vampire film "Thirst". In "The Priests", Kim Yun-seok and Gang Dong-won play two Catholic priests who become involved in a disturbing mystery the can't forsake.

"The Priests" arrived to bump last weekend's number one "Fatal Intuition" down two places to third, with Ridley Scott's sci-fi epic, "The Martian", still seated in second. Worldwide, Scott's adaptation has grossed over $458 million, and since its release in Korea early October, the film has attracted the interest of 4.7 million (6.8%) filmgoers and grossed $33.2 million. Yoon Joon-hyeong's thriller "Fatal Intuition" (starring Joo Won and Yoo Hae-jin) managed to entered in first place last weekend with just over 456 thousand admissions but was pushed back to third here having claimed just 145 thousand in week two (6.3%).

Steven Spielberg's "Bridge of Spies" also arrived on Korean shores last week and was allocated 425 screens from which to pool. 134 thousand (5.7%) came out to support Spielberg's depiction of a Cold War incident involving a pilot who's downed over Soviet Russia and the lawyer determined to secure his release. John Wells' comedy drama "Burnt" (starring Brad Cooper) followed in fifth with 102 thousand (4.5%) during its first weekend out in Korea, and Kim Bong-joo's "The Phone" tumbled from second place to sixth place with just 71.4 thousand (3%) going its way. Since its released late October, "The Phone" has sold over 1.5 million tickets and banked just over $10.4 million.

Nancy Meyers' "The Intern" with Robert De Niro and Anne Hathaway fell three places to seventh, attracting 66.4 thousand (2.9%) across 263 screens, while a re-release of Michel Gondry's 2004 romantic comedy "Eternal Sunshine of the Spotless Mind" came around again to the big screen to the delight of 45.7 thousand (2%). Finally, two new foreign entries closed out the top ten: the French animation "Arthur and the Two Worlds War" (38 thousand at 1.5%), and the American action film by John E. Dowdle, "No Escape", claimed 28 thousand admissions for 1.2% of the pie.