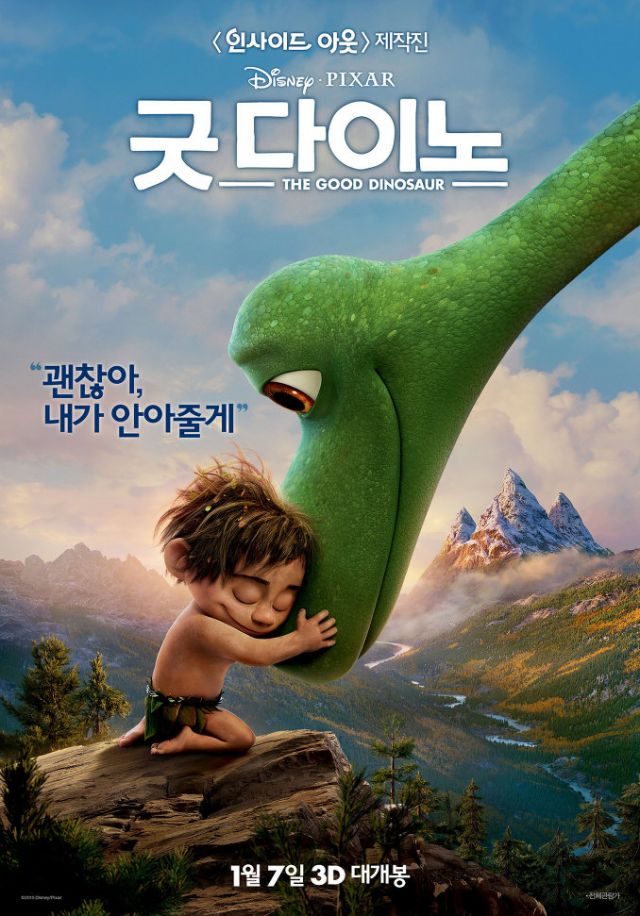 "The Good Dinosaur" comes out on top, "The Himalayas" still strong, and "The Force" has run its course...

Disney and Pixar's latest, "The Good Dinosaur", doesn't quite live up to the high standard these studios have set in the past, but that didn't stop this prehistoric adventure from rising to the top of the pile in South Korea over the weekend. For the past few weeks, "The Himalayas" and "Star Wars: The Force Awakens" have been battling it out at the top (with the former firmly holding the high ground), but the second weekend of the year saw a slight slowdown in terms of the number of admissions sold as "The Good Dinosaur" and a re-release of "Inside Men" took the honours on offer.

"The Good Dinosaur" was allocated 788 screens in its first weekend out, and from them, the film attracted 458.8 thousand admissions to captured 19.6% of the box office pie. The film, directed by Peter Sohn, was made for around $200 million, and since its premiere in Paris back in November, "The Good Dinosaur" has grossed over $266 million worldwide. Its closest challenger, "Inside Men: The Original", added 384 thousand admissions (18%) to its efforts, bringing its bottom line now in Korea to 1.5 million admissions, or $10 million.

It was a close race between second and third place, but the 375 thousand that Lee Seok-hoon's "The Himalayas" claimed was not enough to ensure the film only dropped one place from last weekend. "The Himalayas" has been in direct competition with the record-smashing "The Force Awakens", but that scrap seems to have simmered down with Lee's drama being the clear favourite having now made $45.5 million (7 million admissions).

There was a host of new foreign flicks that made the top ten this week, but the only new local release that made the top ten came in the form of Lee Yoon-jeong-II's drama "Remember You - Movie" starring Jeong Woo-seung and Kim Ha-neul. This story was originally a short film that came out back in 2011 at the Mise-en-scene Short Film Festival, but this tale of solitude and memory loss was reframed for the longer format and claimed the attention of 231 thousand across 556 screens (10.7%) to open its account in fourth place in week one. Close behind Lee's drama fell "Sherlock: The Abominable Bride" with 217 thousand (9.8%), down two places, and then a new entry: Ericson Core's "Point Break" based on a story by W. Peter Iliff Rick King with152 thousand (7%).

Particular Japanese animations often find their way into Korea's top ten and this week its Masakazu Hashimoto's "Crayon Shin-chan: My Moving Story! Cactus Large Attack" that cracked a top ten finish. It attracted 97 thousand across 396 screens (4%) while the American computer animated fantasy "Hotel Transylvania 2" followed in eighth place with 62 thousand (2.6%) of its own, down three places from last weekend where it featured in fifth with 315 thousand.

Rounding out this past weekend's top ten was Quentin Tarantino's "The Hateful Eight" (with Samuel L. Jackson and Kurt Russell) and the latest "Star Wars" film: "The Force Awakens". Tarantino's grim and grueling piece managed 53 thousand admissions from 162 screens (2.5%), while "The Force Awakens" added just 48 thousand to bring its total tally in Korea now to 3.2 million ($23.1 million). Worldwide, "The Force Awakens" has grossed an incredible $1.7 billion.