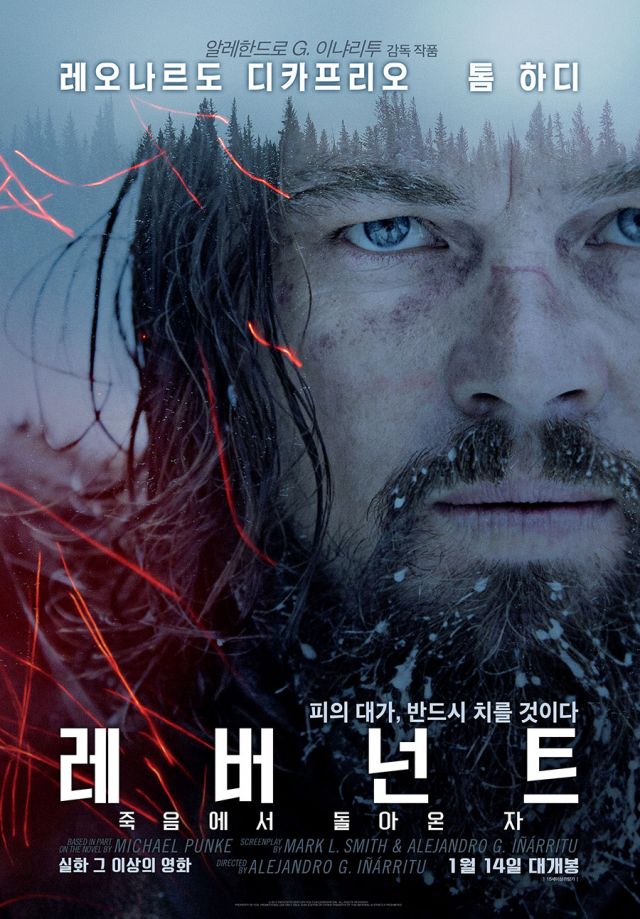 "The Revenant" keeps going despite "A Melody to Remember"...

The grizzly and gruelling "The Revenant" survived a narrowed encounter with Lee Han's "A Melody to Remember" (starring Im Si-wan and Go Ah-sung) to defend the top spot over the weekend. "The Revenant", director by Alejandro G. Iñárritu, has been nominated across an impressive number of categories for the upcoming Oscars, receiving twelve nominations including Best Picture, Best Director and (here's DiCaprio hoping) Best Actor.

Pixar and Disney's "The Good Dinosaur" remained unmoved in third place with 146.6 thousand admissions (8.5%), as opposed to last weekend's haul of 270 thousand (12.4%), followed by a new entry from America: "The Big Short". Starring a dreamy cast, Christian Bale, Steve Carell, Ryan Gosling, and Brad Pitt, "The Big Short" has already made $87.1 million worldwide; in Korea, its first weekend saw 143 thousand flock ($1 million) to its screens (489), but it was unable to claim a podium finish because of "The Good Dinosaur".

Fifth place went to South Korea's Star Wars-killer, "The Himalayas" by Lee Seok-hoon. The film was released mid-December and captured the attention of cinephiles over the record-breaking "Star Wars: The Force Awakens" (which has since been ejected from South Korea's Top Ten). Since its release, "The Himalayas" has made $49 million (7.6 million admissions), 84 thousand of which ($559 thousand) came from this past weekend.

Jo Kyoo-jang's romantic melodrama "Mood of the Day" with Yoo Yeon-seok and Moon Chae-won fell five places from second to sixth with just 83 thousand during its second week out (5.3%), pushing its total tally now to 577, or $2.8 million. A re-release of Woo Min-ho's "Inside Men" ("Inside Men: The Original") sat in seventh place (down two) with 67 thousand (4.4%), followed by a local animation by Ryoo Jeong-woo: "Tayo the Little Bus Movie: Rescue My Friend Ace". This 48-minute piece is Yoo Jeong-woo's second animated feature (his first being "If You Were Me - Anima Vision 2"), and its first-weekend run earned it the attention of just over 40 thousand filmgoers (3.16%).

Lastly, Korea's Top Ten was rounded out by two America films: "Goosebumps", based loosely on the children stories of R.L. Stone, which banked $255 thousand (40 thousand admissions), and the biopic "Steve Jobs" (which was released last Thursday) starring Michael Fassbender with 32.6 thousand (2%).