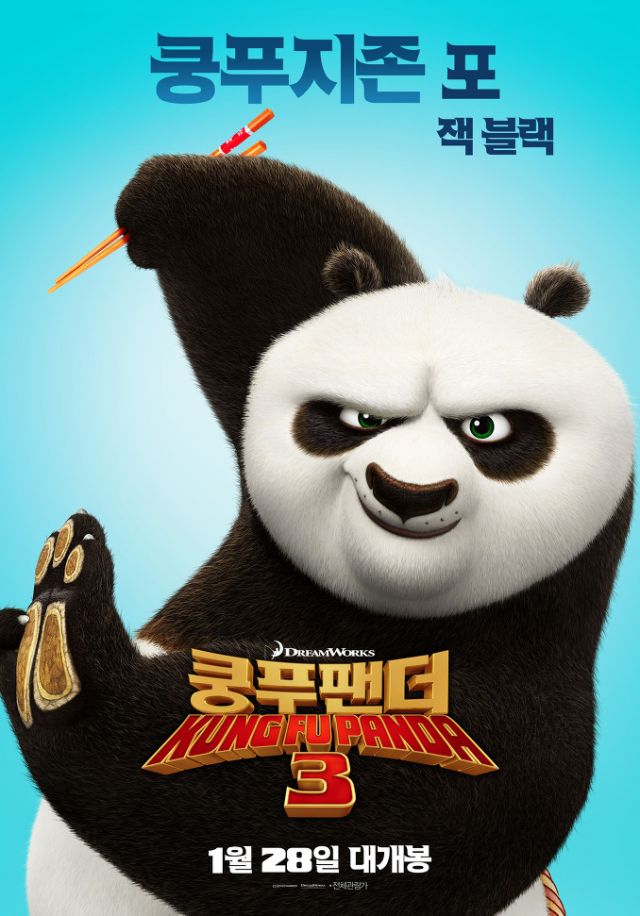 DreamWorks Animation's third installment of the "Kung Fu Panda" series of films came to Korean screens last Thursday and dominated proceedings over the weekend. "Kung Fu Panda 3" had a massive 1,364 screens from which to pool and from them captured 63% of the box office pie (1.3 million admissions). The film was made for around $145 million, and worldwide the film has already grossed $116.7 million.

Second and third place fell to two local films: Lee Ho-jae-I's science fiction drama "SORI: Voice from the Heart" (starring Lee Sung-min and Lee Hee-joon) and Lee Han's war drama "A Melody to Remember". "SORI: Voice from the Heart", a new release, managed 179 thousand admissions across 578 screens (7.8%), while week two for Lee's tale saw it drop just the one place with 177 thousand (7.9%). Last weekend "A Melody to Remember" occupied third place with 147 thousand (24.7%), and with this past weekend's tally added, the film sits on 907 thousand admissions ($5.6 million).

The Oscar-nominated "The Revenant" was unable to secure a third weekend at the top as it was bumped down three places to fourth with 177 thousand admissions (8.3%). To date, over 1.8 million tickets have been sold in Korea alone, and worldwide, the film has grossed over $274.7 million. The serious shuffle at the top meant that "The Big Short" (based on Michael Lewis' novel of the same name, and starring Christian Bale, Steve Carell, Ryan Gosling, and Brad Pitt) also feel, but just the one spot to fifth; it claimed an additional 85 thousand across 33 screens to bring its total tally now to 351 thousand ($2.3 million).

Lee Seok-hoon's epic drama "The Himalayas" (starring Hwang Jung-min, Jung Woo, and Jo Sung-ha) outplayed the latest "Star Wars" over December, and, unlike "Star Wars: The Force Awakens", it's still with us. Last weekend the film slipped to fifth place, and it fell one more here having attracted just 28.3 thousand (1.3%). Since its release mid-December, "The Himalayas" has grossed an incredible $49.8 million.