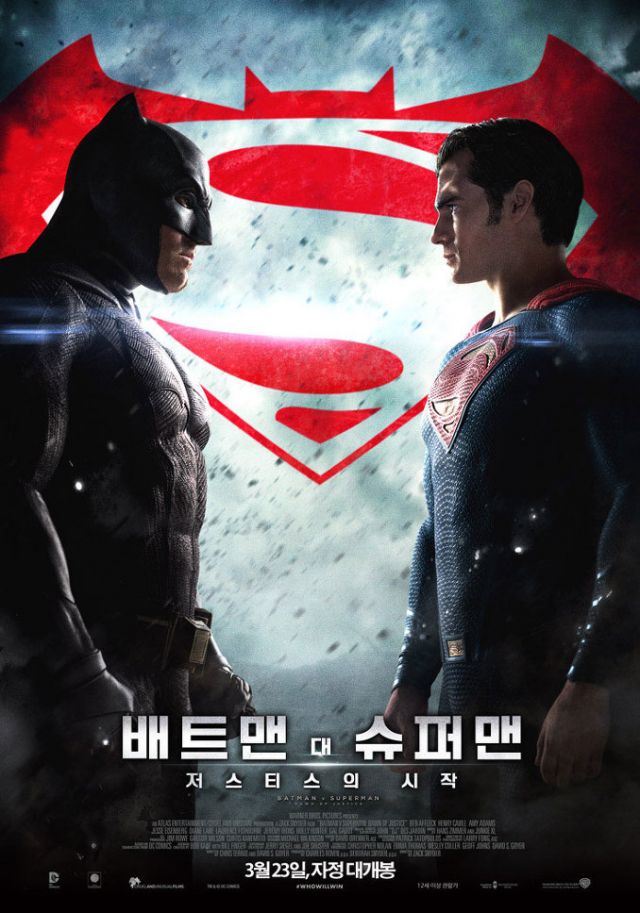 DC's much-anticipated superhero brawl, "Batman v Superman: Dawn of Justice", has made millions over the past few days as filmgoers and comic book fans around the world flocked to their closest theatres to catch these two iconic titans clash. In Korea, the film was released on Thursday and was given an incredible 1,696 screens, from which it attracted 1.1 million admissions to capture 68% of the box office pie. Worldwide, "Batman v Superman" has already grossed over $424 million.

Zack Snyder's duel departs from the what fans have already seen in previous films such as Frank Miller's "The Dark Knight" trilogy.cWarner Brother's executive vice president, Jeff Goldstein, said that they were "absolutely jubilant about the way the fans embraced the film", and that "[t]o be this successful as we launch the DC Comics universe is really a triumph". Some critics, however, have been super harsh on Snyder's marriage, but for now the reception is buzzing as this cinematic event goes live.

The success of DC's latest meant that last weekend's number one, "Zootopia", had to take a step back from its recent winner streak. "Zootopia" was released in Korea mid-February but only took pole position a couple weeks later after the film was released in America. Last weekend the film occupied first by capturing 30.5% (358 thousand admissions) but settled in second here having managed only 14.5%, or 258 thousand. With this weekend's figures added, "Zootopia" has now made over $21.2 million in Korea alone (3.1 million admissions); worldwide, Walk Disney's animal antics has grossed nearly $700 million.

In third place entered a local drama by Choi Jeong-yeol, his first film as a director: "One Way Trip" starring Ji Soo, Suho, Ryu Jun-yeol and Kim Hee-chan. The film is a coming-of-age story about an overnight accident that affects four teenage friends. "One Way Trip" attracted 87.5 thousand filmgoers across 493 screens to capture 4.8% of the sales; which is about three times less than this weekend's number two scored. Cho Jung-rae's timely drama about Korean 'comfort girls' was next with 45 thousand (2.4%); "Spirits' Homecoming" was released ahead of International Women's Day and has since attracted 3.5 million filmgoers ($23 million).

Kevin Reynolds' biblical drama "Risen" rose three place from last weekend's eighth to fifth with 1.8% of the sales going its way (37.7 thousand admissions) and was closely tailed by Babak Najafi's sequel to the 2013 film "Olympus has Fallen", "London Has Fallen" on 36.5 thousand (2%) from 394 screens. Seventh place went to Mo Hong-jin's thriller "Missing You - 2016" starring Shim Eun-kyung and Yoon Je-moon. "Missing You - 2016" came out earlier this month and with the 22.5 thousand it claimed over the weekend, the film's total tally now sits at 622 thousand, or $4.4 million.

In addition to "Batman v Superman" and "One Way Trip", the only other new entry to crack a top ten finish was the Coen Brothers' "Hail, Caesar!" starring Josh Brolin and George Clooney. From 250 screens around Korea, "Hail, Caesar!" attracted just under a percent of the pie (15 thousand), narrowly outplaying last weekend's number seven, "DongJu, The Portrait of A Poet" by Lee Joon-ik. "Dongju" added 12.7 thousand admissions to bring its total tally to 1.1 million ($7.4 million), and the last weekend of the month of March was rounded out by Kwon Hyeok-man's documentary about the Korean martyr Joo Ki-cheol, "Single Determination" with 10.6 thousand admissions.