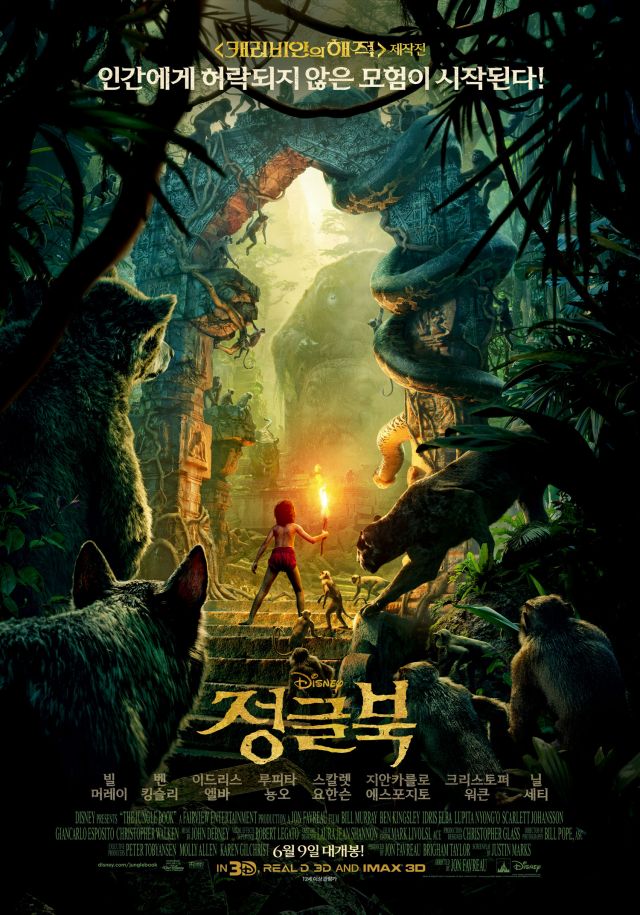 "The Handmaiden" submits to "The Jungle Book" and "Warcraft"...

Park Chan-wook's latest thriller, "The Handmaiden", was released two weeks ago where it entered at the top with 1.2 million admissions. Week two for Park's critically acclaimed film, however, saw it swiftly overtaken by two foreign flicks: Disney's "The Jungle Book" and fantasy flick "Warcraft".

Inspired by Walt Disney's 1967 film, which was in turn based on the collective works of Rudyard Kipling, "The Jungle Book" reimagines an iconic tale through all the glorious technology and know-how of the twenty-first century. Fans have been excited to see how Disney has gone about recreating this classic story, and worldwide the film has already grossed $901.8 million. In Korea, the film's first weekend out saw it claim 771 thousand admissions across 925 screens (27.8%) and managed to topple "The Handmaiden" for pole position.

Duncan Jones' "Warcraft" is based on the popular video games series of the same name, a game that is immensely popular in Korea and its cinematic counterpart was expectedly well-received. During its first weekend, "Warcraft" campaigned across 736 screens around the country and finished the second weekend of June with 555 thousand admissions (20%), followed by last weekend's number one, Park Chan-wook's "The Handmaiden".

Park's thriller recently had a successful showing at Cannes and the film's local release got off to a great start last weekend as fans flocked to the theaters to see what this influential filmmaker had to offer. Last weekend "The Handmaiden" had over a thousand screens from which to pool; week two, however, saw those numbers drop to 781. From then the film captured the attention of 18.8% (526 thousand admissions) bringing its total tally now to 3.1 million ($22.1 million).

In fourth place entered the second installment of the "The Conjuring" horror series of films. James Wan's supernatural horror, "The Conjuring 2", was produced for just $40 million, a sum that it has already more than doubled in sales, and in Korea, it's opening weekend yielded $3.4 million (484 thousand admissions). Na Hong-jin's mystery thriller "The Wailing" (starring Kwak Do-wan, Hwang Jung-min, Jun Kunimura and Chun Woo-hee) was next with 134 thousand stubs going its way (4.8%), the only other local film to enjoy a top ten finish. "The Wailing" occupied third place last week with 375 thousand stubs, but it's been a month since its release and it's starting to buckle under the pressure of fresh summer hits. To date, "The Wailing" has grossed $46.1 million with 6.6 million admissions.

Thea Sharrock's "Me Before You" arrived in Korea at the beginning of June and its second weekend out saw an additional 103 thousand admissions added to move its bottom line in Korea to 5000 thousand ($3.4 million). One of the biggest losers occupied seventh: Marvel's latest, "X-Men Apocalypse", had a strong start last weekend where it took second place with 532 thousand admissions. Week two was less pleasing. "X-Men" claimed 98.2 thousand admissions (3.4%) across a dwindling screen count to move to its new total of 2.8 million. Worldwide, "X-Men" enjoyed strong opening weekends, but thereafter Marvel's new superhero adventure has swiftly shifted out of favour.

"The Angry Birds Movie" banked another 27 thousand admissions ($135 thousand; 0.87%), but slipped three places to settle in eighth, the Japanese animation "Yu-Gi-Oh!: The Dark Side of Dimensions" entered the fray in ninth place with 19.8 thousand (0.65%), and rounding out the second weekend of June was Irish musical drama "Sing Street" by John Carney with 18.2 thousand (0.5%).