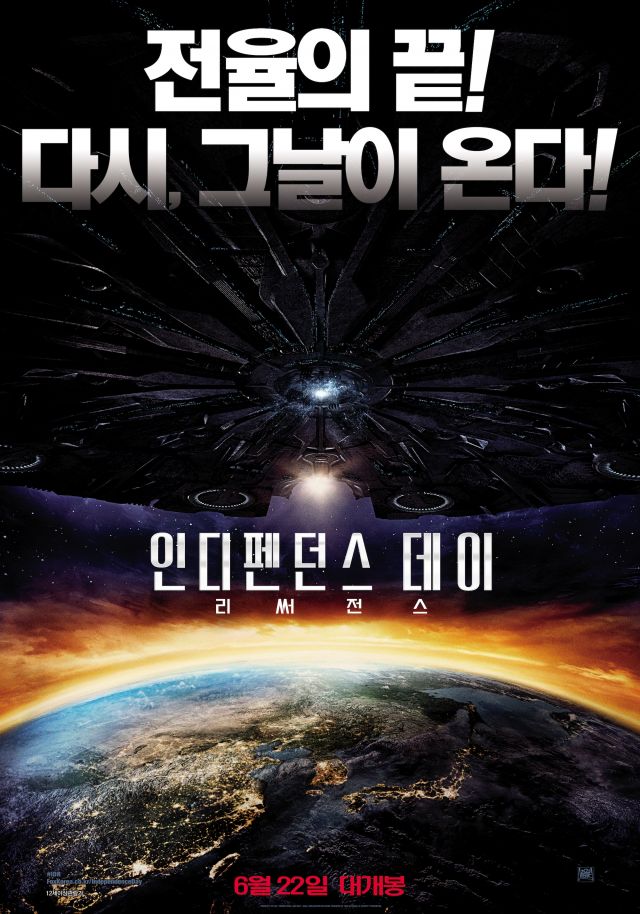 It's been two decades since Roland Emmerich's aliens met Will Smith in "Independence Day", but now the invading extraterrestrials and back for another attack on our Pale Blue Dot. "Independence Day: Resurgence", also directed by Emmerich, but still short a Smith, arrived in Korea on Wednesday and landed firmly in first place with 695,000 admissions (35.7%) across 926 screens.

That meant that Jon Favreau's "The Jungle Book" was denied a third-straight weekend as Korea's number one, but the 349,664 (16.%) it amassed over the weekend was enough to push its total tally now to 2.2 million, or $16.2 million. Disney's remake of their 1967 classic was given a glorious 3D makeover and has grossed almost a billion dollars worldwide since its release early this year.

The highest positioned Korea film came next with Kwon Jong-gwan's crime drama "Proof of Innocence" starring Kim Myung-min, Kim Sang-ho, Sung Dong-il and Kim Young-ae. Released on June 16, "Proof of Innocence" failed to overthrow "The Jungle Book" at the top of the chart during its first weekend out and has subsequently slipped a place thanks to Emmerich's blockbusting sequel. From the 520 screens allocated to Kwon's third feature, 235,881 admissions were added to bring the film's bottom line now to $6.9 million (roughly 1 million admissions).

James Wan's supernatural horror flick "The Conjuring 2" took fourth place by finding another 201,907 admissions (10%), followed by Park Chan-wook's "The Handmaiden" which grabbed 7.6% of the box office pie (153,831 admissions). "The Handmaiden" has now sold over four million admissions ($28.5 million) making this dark thriller one of Park's most commercially successful flicks on home soil. Lee Kyoung-mi's second feature film, "The Truth Beneath" starring Son Ye-jin and Kim Joo-hyuk, was the only new local release to force a reshuffle in the top ten. From its 501 screens, the film attracted 136,066 filmgoers (2.9%) to settle in sixth behind Park's latest.

The American-British comedy "Me Before You" by Thea Sharrock arrived in Korea at the beginning of June, and with the 59,521 admissions (2.9%) Sharrock's romantic drama gathering over the weekend, the film now has 775,342 admissions to its name, or $5.4 million. "Me Before You" took $20 million to make and it's closing in on $100,000 million ($87 million) in sales worldwide.

"Criminal", an action thriller by Ariel Vromen, was also released on Wednesday, but it only managed to capture 1.8% of filmgoers (44,415 admissions) during its first weekend out and about. In ninth place with 36,562 admissions was "Warcraft" (down four places), a film based on the popular series of video games of the same name, followed by Na Hong-jin's latest thriller: "The Wailing". "The Wailing" was released mid-May, and with the 20,358 thousand stubs it gathering over the weekend, the film now stands on 6.8 million admissions ($47.4 million).