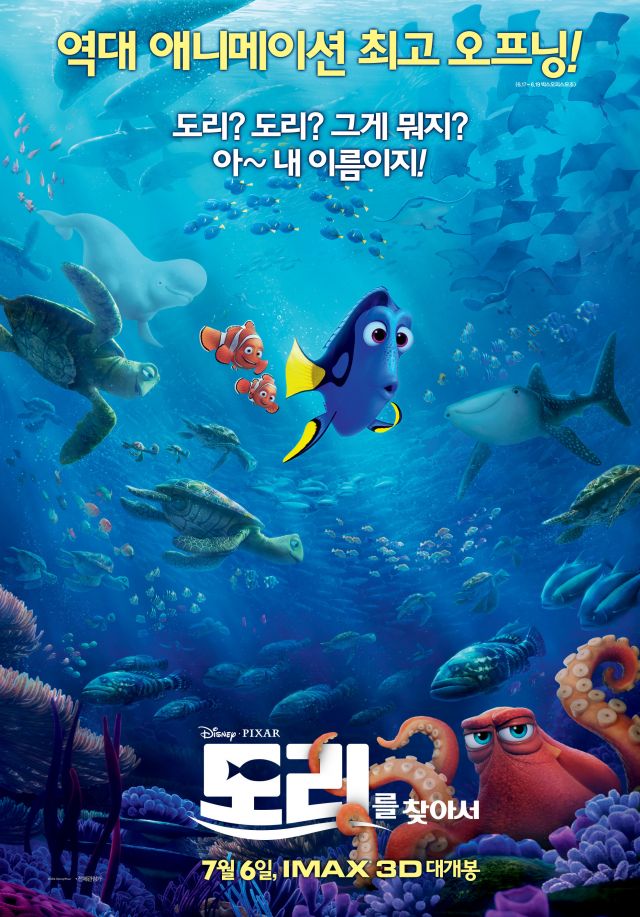 Dory finds a way to beat "The Man Who Sells the River"...

Disney and Pixar's sequel to "Finding Nemo" (2003), "Finding Dory", arrived in theatres last week and-as expected-dominated box offices around the world. In Korea, the film was allocated over a thousand screens around the country and from them captured 32% of the box office pie (825,131 admissions) to come out on top during a very competitive season. "Finding Dory" has already sold over a million admissions ($7.3 million) since Wednesday, and, worldwide, it's grossed over $642.8 million (the film was produced for an estimated $200 million). "Finding Dory" is on track to becoming one of the highest-grossing films of the year.

Park Dae-min's historical comedy "Seondal: The Man Who Sells the River" (starring Yoo Seung-ho, Cho Jae-hyun, Ko Chang-seok and Ra Mi-ran) was also released this past week. "Seondal: The Man Who Sells the River", Park's second feature after the 2009 film "Private Eye", claimed 779,200 admissions (28.9%) across 942 screens to settle in second place just behind "Finding Dory". It was a close race to see who would claim pole position this weekend, with less than 50,000 admissions between one and two, and together these two new releases gobbled over 60% of the box office pie.

The success of "Finding Dory" and "Seondal: The Man Who Sells the River" meant that last week's winner, "Familyhood" by Kim Tae-gon, was thrust to third and so denied a second-straight weekend at the top of the pile. Last weekend Kim's comedy attracted 652,894 admissions (30.4%), and with the 409,186 (15.7%) its claimed over the weekend, the film has now made over $12.1 million (1.7 million admissions).

Fourth place went to "Now You See Me 2" on 196,989 admissions (7.7%) from 412 screens, followed by David Yates's "The Legend of Tarzan" on 119,795 (4.6%). "The Legend of Tarzan" arrived in Korea late June and sat just behind "Familyhood" last week in second place with 405,820 admissions (19.8%). It was unable to maintain that initial enthusiasm here, however, and was promptly denied another podium finish. This latest version of the Tarzan tale is still currently running the red: the film was produced for $180 million but so far it's only managed to amass $135.4 million worldwide.

James Wan's supernatural horror film "The Conjuring 2" entered the fray in sixth place having attracted 37,708 admissions (1.4%), followed by the bombastic sequel "Independence Day: Resurgence" by Roland Emmerich. Two weeks ago, "Resurgence" was Korea's film of choice, but the aftermath of that initial release was been less spectacular and the film now finds itself slipping towards the wrong end of the chart having banked a total of $11 million (1.4 million admissions), 34,005 of which came from this past weekend.

"The Jungle Book" also took a tumble. It fell from fifth to eighth place by banking another 27,603 admissions (1%), moving its total tally in Korea now to 2.5 million ($18.7 million). Worldwide, this contemporary reboot is around $60 million short of a billion dollars (the film was produced for $175 million). The Japanese mystery horror "The Inerasable" by Yoshihiro Nakamura finally made its way over to Korea having been released in its home country late last year (it was released in Korea on Thursday), and from the 280 screens allocated, "The Inerasable" banked $252,641 (24,774 admissions). Lastly, a re-release of Marc Webb's 2009 romantic comedy is still hovering in tenth, and this week it managed to add 23,159 admissions to shift its bottom line now to 252,736 ($1.7 million).