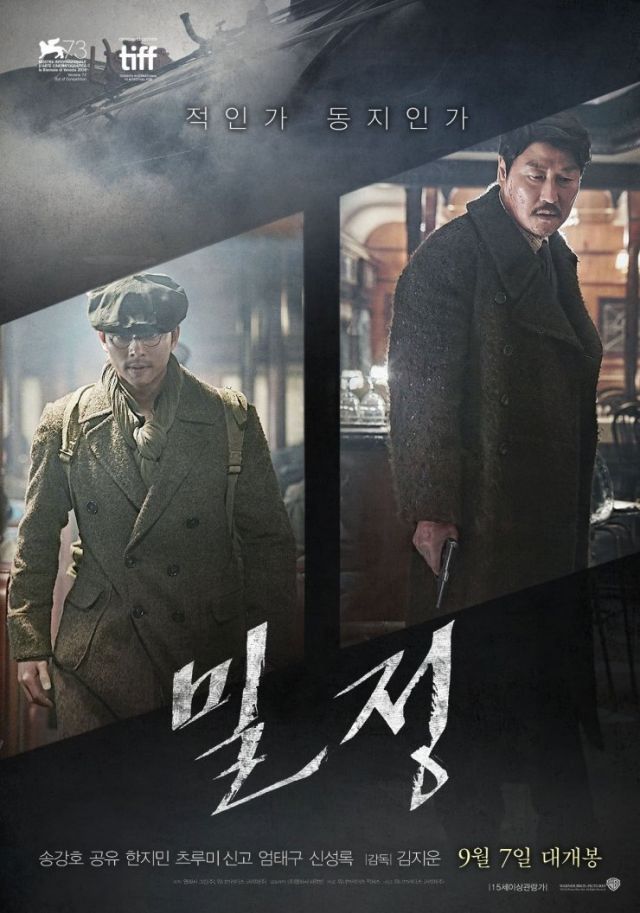 After a month-long run as Korea's number one, Kim Seong-hun's action thriller "Tunnel" (Ha Jung-woo, Bae Doona, Oh Dal-soo) was finally dethroned over the weekend following the release of a string of new films. The most successful of which came in the form of Kim Jee-woon's latest, "The Age of Shadows": Korea's official submissions to next year's Oscars.

"The Age of Shadows" is a wartime spy thriller depicting the history of the 'Organisation of Righteous Bravery' during Japan's occupation of Korea during the first half of the twentieth century. Kim is responsible for such hits as "A Tale of Two Sisters" (2003), "A Bittersweet Life" (2005), "I Saw the Devil" (2010), and his latest film enjoyed a massive opening weekend by clinching 1.6 million admissions (40.9%) across 1,444 screens.

Its closest rival, Kang Woo-seok's "The Map Against the World" (starring Cha Seung-won, Yoo Jon-sang, Kim In-kwon and Nam Ji-hyun), attracted less than seven times Korea's new number one. "The Map Against the World" is also based on real-life events: during the late 1800s, cartographer Kim Jeong-ho produced a large scale map of the peninsula ("Daedongyeojido", or "The Great Map of the East Land") which is considered to be the oldest map in Korea. The film, director Kang's ninth feature film, drew 219,297 admissions (18%) from 756 screens during its first weekend.

Disney's "Alice Through the Looking Glass" by James Bobin (with, most notably, Tim Burton as one of the producers) arrived in Korea on Wednesday and its first weekend out yield 156,040 admissions (10.2%); worldwide, Disney's remake of Lewis Carroll's iconic tale has already banked $295.4 million (the film was produced for an estimated $170 million).

Local animation "Moonlight Palace" by Kim Hyun-ju-I (her debut feature) was up next in fourth place with 55,006 admissions (3.5%). The story is a fantastical adventure of one young girl's adventure as she awakens the sleepy gods hibernating in Changdeok Palace. The voice acting for the film was done by Lee Honey, Kim Seul-gi, Kwon Yool and Kim Su-an. Another animation, this time out of South America, was up next in fifth place; the 2013 Argentine-Spanish film "Underdogs" claimed 49,492 admissions (2.2%), followed by last weekend's number one",Tunnel".

"Tunnel" is currently the fourth highest-grossing film of the year with over 7 million admissions, 46,305 of which came from this past weekend. Not far behind Kim's latest fell the America supernatural horror "Lights Outs" by director David F. Sanderberg. Last weekend "Lights Out" took third place, and before that second, but given the host of new releases this week, Sanderberg's flick fell four places to settle in seventh with 41,760 admissions, moving its total tally in Korea now to just over a million.

The only other new release to make the top ten was the Belgium animated film "Robinson Cruseo" by Vincent Kesteloot and Ben Stassen. This soccer-inspired film was released in Belgium back in March and arrived in Korea this past Wednesday. From the 329 screens allocated, "Robinson Cruseo" attracted 41,472 filmgoers during its first weekend out.

Critics and filmgoers have largely slammed Dennis Gansel's "Mechanic: Resurrection", and after being out just one week, Korean audiences have followed suit; the film fell from second place to ninth having only managed to add an additional 39,190 admissions for a new total of 516,531. Finally, the weekend's top performers were rounded out by Heo Jin-ho's period melodrama, "The Last Princess" starring Son Ye-jin. Heo's eighth film added 10,554 admissions to bring its total now to a respectable 5.5 million.