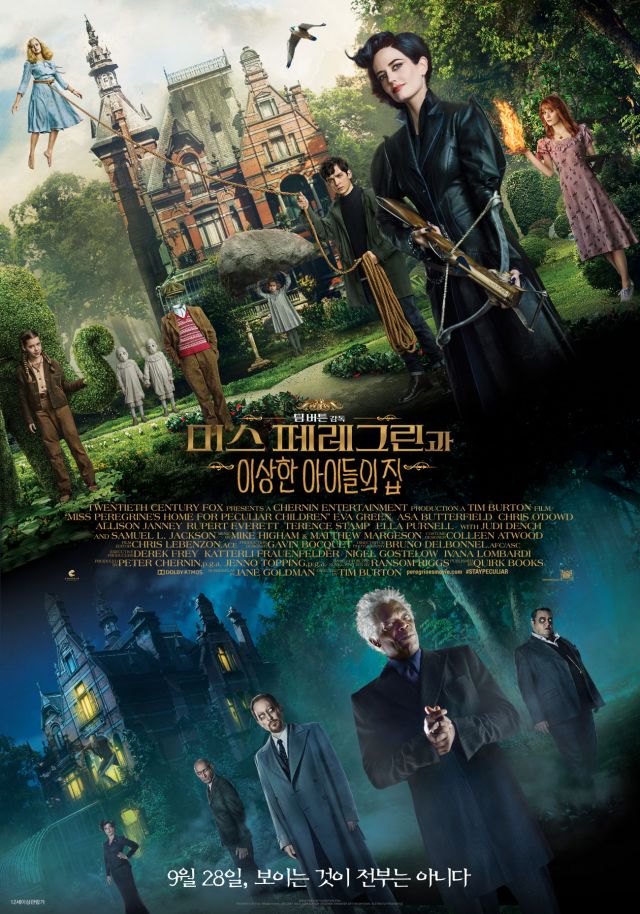 It's been weeks since a foreign film topped the charts in Korea, but after entering the fray in second place last week, Tim Burton's dark fantasy drama, "Miss Peregrine's Home for Peculiar Children" (starring Eva Green), managed to top the charts with 660,702 admissions (35.3%). Last weekend, Burton's latest, which is based on Ransom Riggs' 2011 novel of the same name, entered in second place with 23.5% of the sales from 810 screens, but an increase in screens to just under 900 helped propel the film to the top as its total tally in Korea moves to 1.9 million ($14.6 million).

392,348 admissions (22%) was enough for Fede Alvarez's "Don't Breathe" to capture second place during its second week out. Last weekend, this American horror entered in eighth with under 30,000 admissions, but after having its screens increased from 302 to 671, this short feature (the film is only 88 minutes) rose six to settle behind Tim Burton's "Miss Peregrine".

Last weekend's number one, Kim Seong-su's action film "Asura: The City of Madness" (starring Jung Woo-sung, Hwang Jung-min, Ju Ji-hoon and Kwak Do-won), captured 11.4% of the box office pie (207,424 admissions) and moved its total tally to 2.4 million, or $17.7 million, making it the only Korea film this week to claim a podium finish. "Bridget Jones's Baby" by Sharon Maguire, the sequel to popular 2004 film, came next with 138,793 (7.6%), followed by the only new Korea release to made the top ten this week: Lee Gye-byeok's "Luck.Key" starring Yoo Hae-jin.

"Lucky.Key" is Lee's second feature as a director (his first being "The Beast and the Beauty" back in 2005) and it's based on a Japanese film that sees a notable gangster and a side actress switch places. Lee's sophomore film was allocated 345 screens and from them captured the interest of 125,949 filmgoers (7%). Not too far behind Lee's efforts was Clint Eastwood's biographical film "Sully" based on the heroic acts of Captain Chesley Sullenberger who saved the lives of 155 passengers when he successfully landed a commuter jet on the Hudson River. "Sully" has been hovering in the middle order since its release late September, and with the 97,942 admissions (5.4%) the film claimed over the weekend, Eastwood's latest now moves its bottom line in Korea to $4 million (532,985).

Lee Jae-yong's drama "The Bacchus Lady" was screened at the 66th Berlin International Film Festival under the Panorama section, but only recently arrived on home soil where 32,470 filmgoers (1.6%) came out in support from 313 screens. The story stars veteran actress Youn Yuh-jung as a sex worker who helps one of her male clients commit suicide.

Kim Ki-duk's latest film, "The Net" starring Ryoo Seung-bum, also recently arrived on home soil after featuring at the 73rd Venice International Film Festival that took place last month. The film follows a North Korean fisherman who accidentally ends up in South Korea after his engine breaks down, but when he eventually returns to the North learns that he may not belong on either side of the divide.

Finally, the second weekend of October was rounded out by the American animated feature "Pete's Dragon" by David Lowery (a remake of Malcolm Marmorstein's 1977 musical film of the same name). The film added 18,184 admissions (1%) from 138 screens, moving its total admission count in Korea now to 88,276 ($638K); worldwide, Lowery's latest has grossed $128 million having produced the film for $65 million.