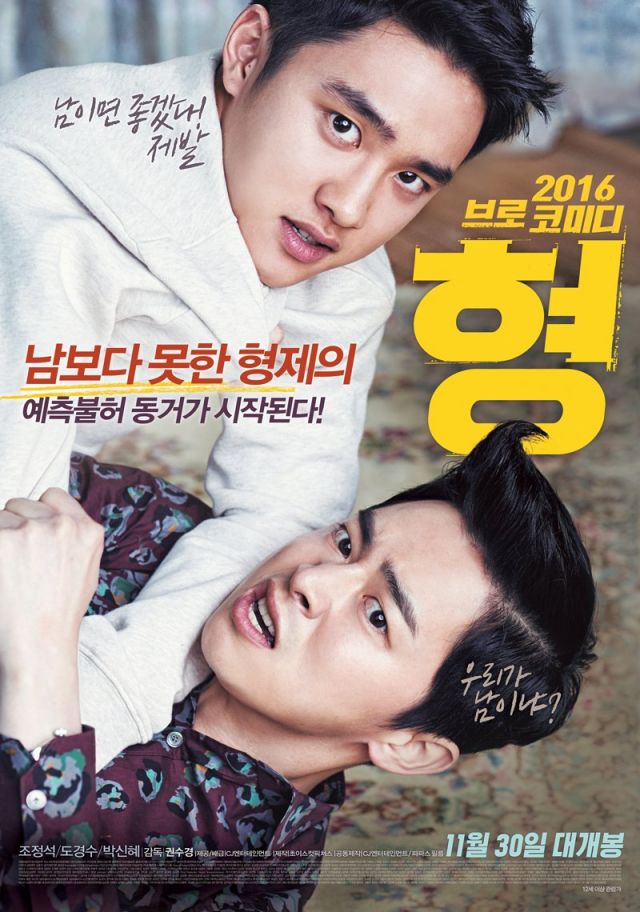 Local comedy "My Annoying Brother" rises to the top amid protests...

Kwon Soo-kyeong's family comedy "My Annoying Brother" captured 30% of the box office sales to push its total tally now past the 2 million mark. The film, Kwon's second after "Barefoot Ki-bong", added 597,954 admissions from 831 screens and has now grossed $14.4 million (2.1 million admissions) since its release late last month. That means it has surpassed the 1.9 million admissions Kwon's debut film attracted back in 2006.

Not far behind Kwon's comedy entered Lee Eon-hee's "Missing Woman" starring Uhm Ji-won and Gong Hyo-jin. From 790 screens, No's latest claimed 23.7% of the ticket sales (470,159 admissions) and pushed last weekend's number one, David Yates's "Fantastic Beasts and Where to Find Them", down two places to third. Yates's film – based on J. K. Rowling book's of the same name; she also wrote the screenplay – added 432,623 admissions (22.9%) to push past "Kung Fu Panda 3"'s 3.9 million admissions and become the thirteenth highest-grossing film in Korea this year. The film still needs another 200,000 to pass Park Chan-wook's "The Handmaiden".

Two new entries from America occupied fourth and fifth place: "Jack Reacher: Never Go Back" (sequel to "Jack Reacher") and "Underworld: Blood Wars" (the fifth film in the franchise) both arrived on Friday and claimed 283,762 (14.2%) and 34,161 (1.7%) respectively. The German animation about a young girl who goes on a journey to save her grandfather's life, "The Little Medic: Secret Mission of the Bodynauts", move down one place to sixth with 25,871 admissions (1.2%), followed by another new local release: "Derailed" by Lee Seong-tae. This 91-minute action film is Lee's debate and stars Ma Dong-seok, Choi Minho and Kim Jae-young; the film had its premiere in October at the Busan International Film Festival, Korea's most prestigious film festival, under the Panorama section.

The second-highest grossing foreign film of the year was up next. Marvel's "Doctor Strange" has been active on Korea's chart since late October, and with the 18,152 admissions (0.9%) it claimed here, Scott Derrickson's surreal superhero flick has accumulated $40.4 million (5.4 million admissions) in Korea; worldwide, "Doctor Strange" has grossed $634.9 million having been produced for an estimated $165 million. "Miss Saigon : 25th Anniversary Performance" slipped one place to ninth with 7,319 (0.9%), followed by the Japanese animated feature "Sinbad" on 6,088 (0.3%) in tenth.