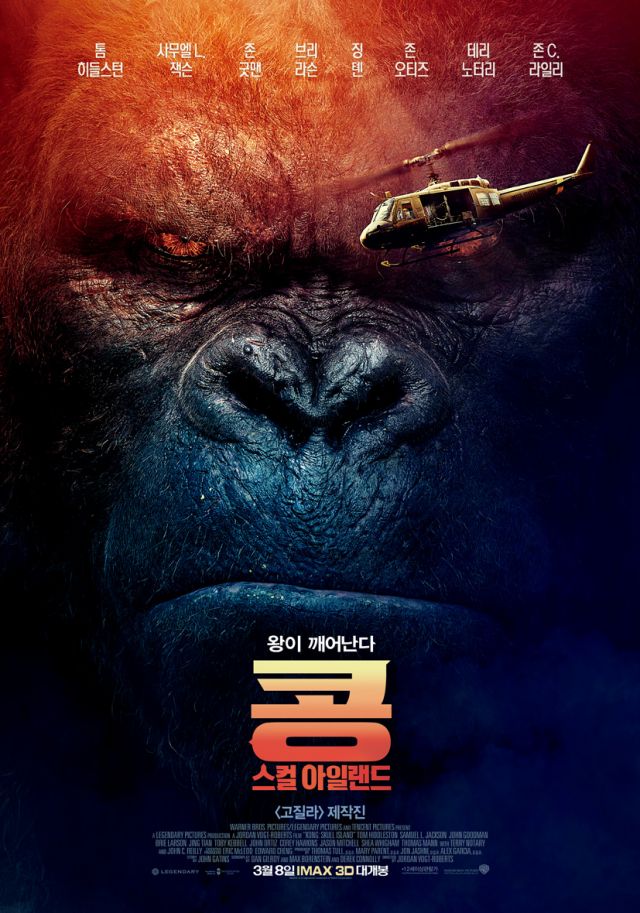 Jordan Vogt-Roberts's reboot of the iconic King Kong character in "Kong: Skull Island" (Tom Hiddleston, Samuel L. Jackson, John Goodman and John Goodman) arrived last Wednesday and climbed to the top of the chart with 49.14% of the box office pie. (Interestingly, one of the films that Vogt-Roberts said influenced him was Bong Joon-ho's "The Host".) From 984 screens, "Kong" attracted 823,219 admissions ($6.1 million) during its first weekend out in Korea. Worldwide, "King" has already recouped an estimated $142.6 million of the $185 million it took to produce; the film was released in the US last Friday.

Lee Soo-yeon's crime thriller "Bluebeard" was the highest local film this week. This psychological thriller, Lee's third film after "The Uninvited" (2003) and "Modern Family" (2012), saw its screen count drop from 914 to 544, and with the 115,066 admissions "Bluebeard" claimed over the weekend, its second, the film's total gross is now $8.2 million, or 1.1 million admissions.

M. Night Shyamalan's latest was up next. Three weeks ago, Split became the first foreign film to claim the top spot in Korea's chart in 2017, and with the 63,656 (3.79%) it earned over this past weekend, Shyamalan's low-budget horror has now banked $11.6 million in Korea alone. The film reportedly cost just $9 million to make, but already its earned nearly a quarter of a billion dollars in sales worldwide.

"New Trial", a detective drama by Kim Tae-yoon, has been out since mid-February where it entered in first place. Week four for Kim's third film saw its total gross reach $16.5 million (2.3 million admissions), $475,712 (63,656 admissions) of which came from this past weekend. Currently, "New Trial" is the fifth highest-grossing film of the year behind the the Japanese anime "Your Name" ($25.3 million), "The King" ($37.8 million), and "Confidential Assignment" ($55.5 million).

"La La Land" (starring Ryan Gosling and Emma Stone) by director Damien Chazelle made a return to Korea's top ten last week in the wake of the Oscar ceremony (where it won Best Director, Best Actress, Best Cinematography, Best Original Score, Best Original Song, and Best Production Design). The film has since moved up the chart one place to settle in six with 32.610 admissions (1.96%), bringing its total in Korea now to 3.4 million ($24.8 million).

Derek Cianfrance's adaptation of M. L. Stedman's 2012 novel of the same name, "The Light Between Oceans", arrived in seventh to 275 screens and captured 1.58% of the sales (27,541 admissions), followed by the 3D computer animation "Trolls" starring Anna Kendrick and Justin Timberlake. "Trolls" fell three places to eighth with 23,451 admissions (1.28%), and since its release mid-February, Mike Mitchell's feature has grossed $4.3 million in Korea alone (669,329 admissions); worldwide, this DreamWorks Animation film has more than doubled its production of $125 million by bringing in $344 million.

Like "La La Land", Barry Jenkins's "Moonlight" also made a return to Korea's top ten after the Oscar ceremony; it won Best Picture, Best Supporting Actor and Best Adapted Screenplay. "Moonlight" added 17,362 admissions (1%) across 139 screens and was followed in tenth by Tate Taylor's adaptation of Paula Hawkins' debut novel, "The Girl on the Train" (Emily Blunt). "The Girl on the Train" was released in the US back in September last year, but only recently arrived in Korea. From 319 screens, this psychological thriller captured the interest of 14,695 filmgoers across 319 screens.