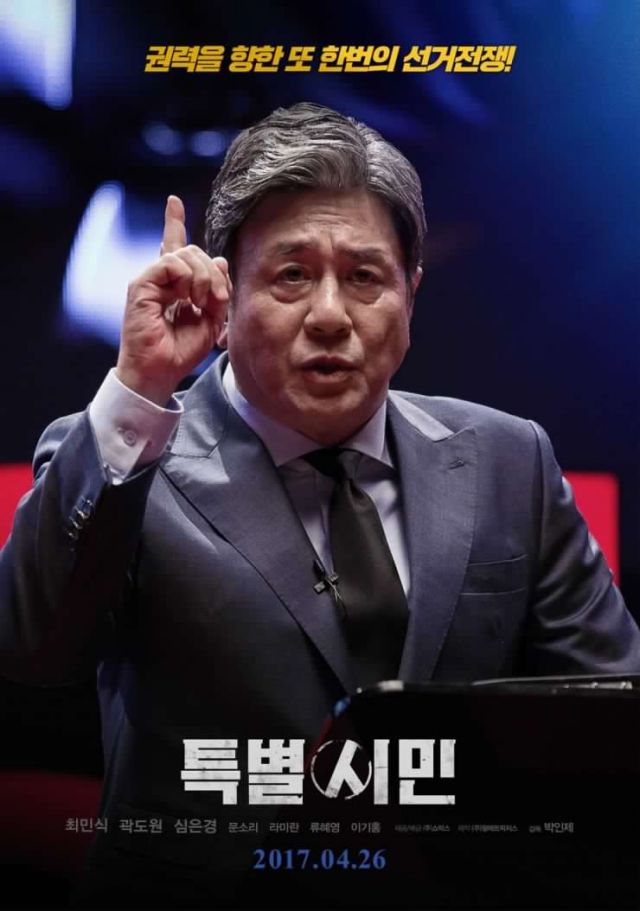 "The Mayor" and "The King's Case Note" arrive and thrive ahead of the holidays...

Seven new films (five of which were local) entered the fray this past week as the country heads towards one of its most competitive times of the year. A string of national holidays-which includes Buddha's Birthday, Children's Day, and the upcoming presidential elections-will draw the crowds as many zero in on their nearest big screen to catch some of the season's cinematic hopefuls.

It was a close race between Park In-je's "The Mayor" and Moon Hyeon-seong's "The King's Case Note", but Park's sophomore feature (after "Moby Dick") came out on top with 32.34% of the sales. "The Mayor", stars Choi Min-sik as the Mayor of Seoul who's running for a third term when things take a toxic political turn for the worst on the campaign trail. From 1,150 screens, Park's timely drama claimed 592,815 admissions to secure the top spot.

Moon Hyeon-seong's debut film, "As One" (starring Ha Ji-won and Bae Doona), claimed 1.8 million admissions back in 2012; Moon's second feature, a Joseon-era, fish-out-of-water drama, opened its account with 513,201 admissions (27.71%). "The King's Case Note" stars Lee Sun-kyun and Ahn Jae-hong as the Joseon King and his chronicler on a quest to unravel a mystery that threatens the crown. The arrival and success of these two local dramas meant that last weekend's number one, the eighth instalment in the "Fast and Furious" series of films, "The Fate of the Furious", was denied a third-straight week in pole position.

Boasting an all-star action cast, which includes the likes of Vin Diesel, Dwayne Johnson, Jason Statham, and Michelle Rodriguez, "The Fate of the Furious" recently crossed the billion-dollar mark worldwide; in Korea, since its release April 12, it has grossed $23.1 million, $2.5 million of which (349,071 admissions) came from this past weekend after its screen count was slashed from 1,283 to 711.

Go Dong-woo and Lee Dahl's "Theatrical Version Tobot : The Attack and of the Robot Army" managed 51,850 admissions from 231 screens around the country, followed by the highest-grossing foreign film of the year. Bill Condon's "Beauty and the Beast" (starring Emma Watson and Dan Stevens) has been flying high in the chart ever since its release back in mid-March. And with the 38,253 admissions the remake claimed over this, the last weekend of April, the film moved its total tally in Korea to 5.09 million ($36.6 million).

"Daddy You, Daughter Me", Kim Hyeong-hyeop's directorial debut, fell five places to seventh with 33,718 admissions (1.71%), growing its bottom line to $4.3 million. Following Kim's family drama entered a local documentary by Hong Hyeon-jeong and Hong Joo-yeon. "Suh-Suh Pyoung, Slowly and Peacefully" tells the story of Elisabeth Johanna Shepping (the "Joseon Teresa"), a Christian missionary from Germany who dedicated her life to the service of others. This 78-minute film claimed 1.41% of the sales (28,298 admissions), or $190,786.

The final two places fell to the Japanese animation "Kuroko's Basketball The Movie LAST GAME" and the British historical drama "Denial" (based on Deborah Lipstadt's book "History on Trial") by director Mick Jackson. They claimed 9,336 admissions (0.47%) and 7,701 (0.41%) from 93 and 104 screens respectively