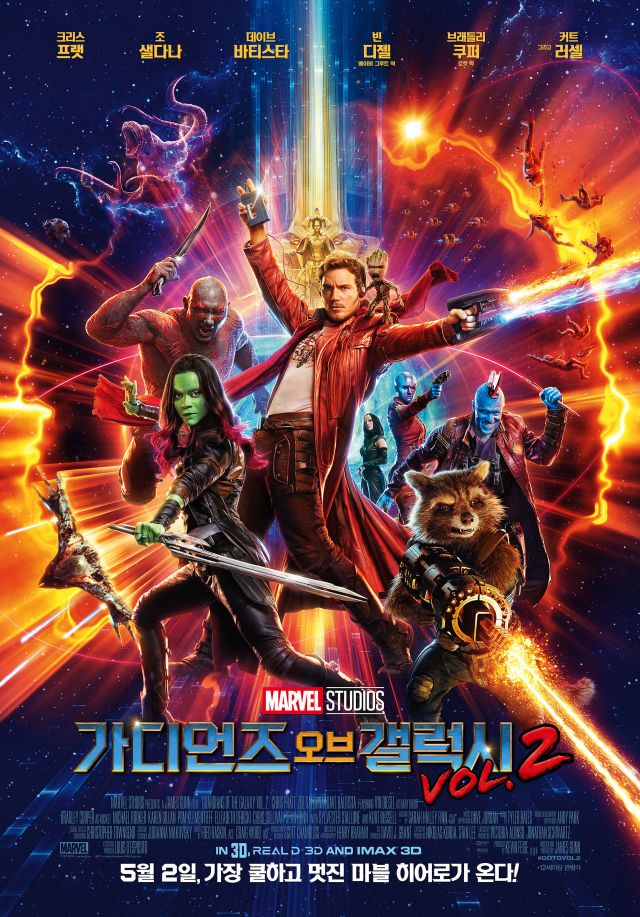 Marvel's "Guardians of the Galaxy Vol. 2" narrowly outplays "The Sheriff In Town" and "The Boss Baby" for the top spot...

The second volume of Marvel's "Guardians of the Galaxy" franchise arrived in Korea last Wednesday and rose to the top of the chart with 883,846 admissions (28.98%). Back in 2014, the first film grossed $773.3 million worldwide, and the sequel is expected to cross the billion dollar mark; currently, having been produced for $200 million, "Guardians of the Galaxy Vol. 2" (starring Chris Pratt) has already grossed over $427 million. In Korea, the film was allocated 1,218 screens around the country for its first weekend and is fast approaching 2 million admissions (currently 1.7 million, or $13.1 million).

Last weekend's number two - "The King's Case Note" by Moon Hyeon-seong - added 291,976 (8.93%), moving its bottom line now to $10.2 million (1.4 million admissions), and was followed by the high-octane American action outing "The Fate of the Furious" in fifth. F. Gary Gray's "F8" has been active in Korea's box office since mid-April, and with this past weekend's sales tallied, the film has grossed $26 million in Korea alone; worldwide, "The Fate of the Furious" has banked an incredible $1.15 billion.

In anticipation for the string of public holidays in Korea, there was a host of new releases last week, with Park In-je's drama "The Mayor" (Choi Min-sik) coming out on top. Week two for Park's sophomore film, however, saw it slip five places to sixth with 89,956 admissions (2.75%), moving its total gross now to $9.1 million, or 1.3 million admissions. With less than 2,000 admissions behind Park's latest was Sony Pictures Animation's 3D animation "Smurfs: The Lost Village": from 488 screens (down from 607), Kelly Asbury's film added 88,182 admissions (2.47%) to settle in seventh.

The final three places went to local films: "Super Bernard: Spy Adventures", a 77-minute action animation by Lim Ah-ron, grabbed 1.08% of the sales (39,459); "Theatrical Version Tobot : The Attack and of the Robot Army" moved its bottom line to $871,596 with the 30,805 admissions (0.89%) it earned here; and the final place in the top ten went to Hong Hyeon-jeong and Hong Joo-yeon's documentary about the 'Joseon Teresa', "Suh-Suh Pyoung, Slowly and Peacefully" (the German missionary Elisabeth Johanna Shepping) with 10,532 admissions.